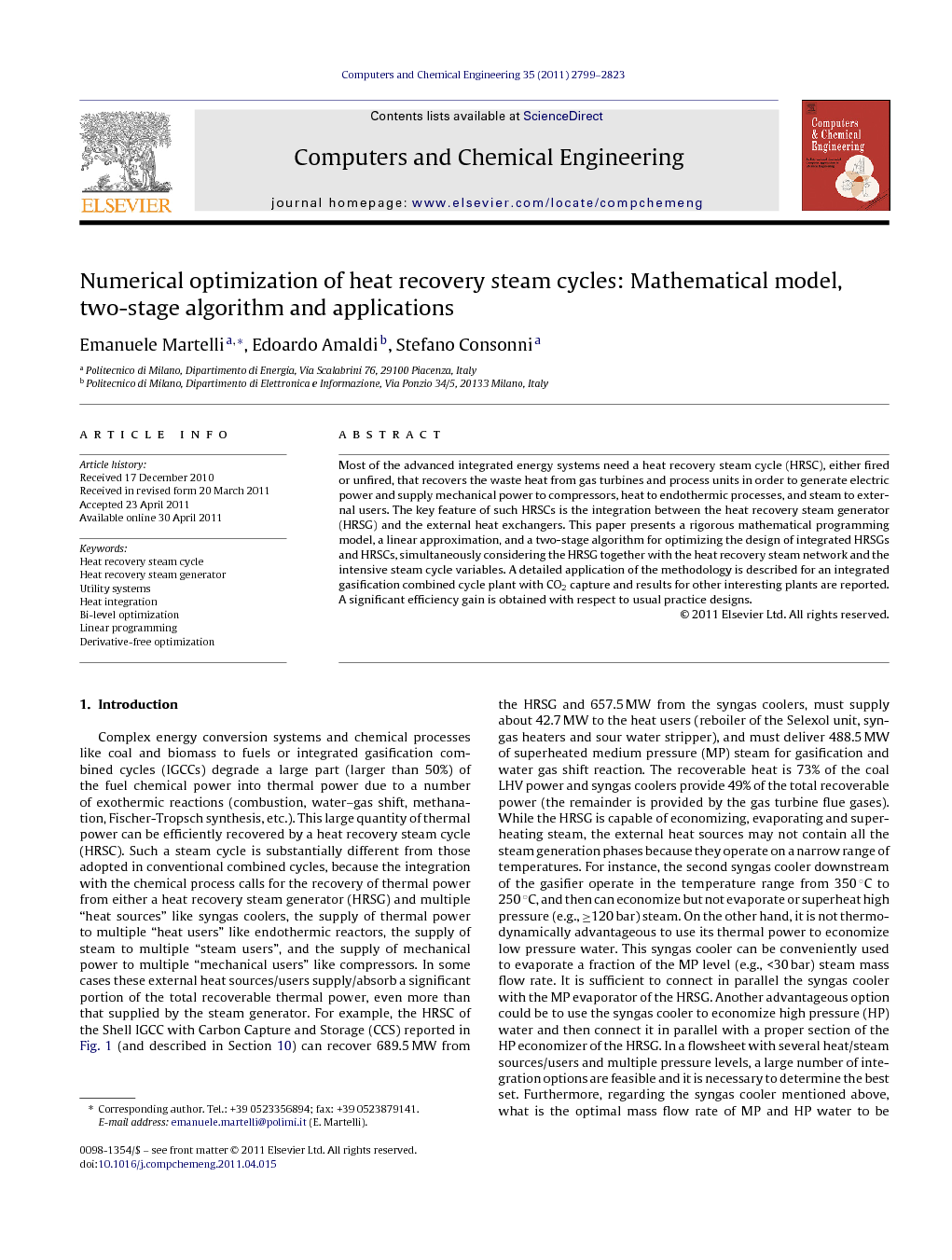 Most of the advanced integrated energy systems need a heat recovery steam cycle (HRSC), either fired or unfired, that recovers the waste heat from gas turbines and process units in order to generate electric power and supply mechanical power to compressors, heat to endothermic processes, and steam to external users. The key feature of such HRSCs is the integration between the heat recovery steam generator (HRSG) and the external heat exchangers. This paper presents a rigorous mathematical programming model, a linear approximation, and a two-stage algorithm for optimizing the design of integrated HRSGs and HRSCs, simultaneously considering the HRSG together with the heat recovery steam network and the intensive steam cycle variables. A detailed application of the methodology is described for an integrated gasification combined cycle plant with CO2 capture and results for other interesting plants are reported. A significant efficiency gain is obtained with respect to usual practice designs.

Complex energy conversion systems and chemical processes like coal and biomass to fuels or integrated gasification combined cycles (IGCCs) degrade a large part (larger than 50%) of the fuel chemical power into thermal power due to a number of exothermic reactions (combustion, water–gas shift, methanation, Fischer-Tropsch synthesis, etc.). This large quantity of thermal power can be efficiently recovered by a heat recovery steam cycle (HRSC). Such a steam cycle is substantially different from those adopted in conventional combined cycles, because the integration with the chemical process calls for the recovery of thermal power from either a heat recovery steam generator (HRSG) and multiple “heat sources” like syngas coolers, the supply of thermal power to multiple “heat users” like endothermic reactors, the supply of steam to multiple “steam users”, and the supply of mechanical power to multiple “mechanical users” like compressors. In some cases these external heat sources/users supply/absorb a significant portion of the total recoverable thermal power, even more than that supplied by the steam generator. For example, the HRSC of the Shell IGCC with Carbon Capture and Storage (CCS) reported in Fig. 1 (and described in Section 10) can recover 689.5 MW from the HRSG and 657.5 MW from the syngas coolers, must supply about 42.7 MW to the heat users (reboiler of the Selexol unit, syngas heaters and sour water stripper), and must deliver 488.5 MW of superheated medium pressure (MP) steam for gasification and water gas shift reaction. The recoverable heat is 73% of the coal LHV power and syngas coolers provide 49% of the total recoverable power (the remainder is provided by the gas turbine flue gases). While the HRSG is capable of economizing, evaporating and superheating steam, the external heat sources may not contain all the steam generation phases because they operate on a narrow range of temperatures. For instance, the second syngas cooler downstream of the gasifier operate in the temperature range from 350 °C to 250 °C, and then can economize but not evaporate or superheat high pressure (e.g., ≥120 bar) steam. On the other hand, it is not thermodynamically advantageous to use its thermal power to economize low pressure water. This syngas cooler can be conveniently used to evaporate a fraction of the MP level (e.g., <30 bar) steam mass flow rate. It is sufficient to connect in parallel the syngas cooler with the MP evaporator of the HRSG. Another advantageous option could be to use the syngas cooler to economize high pressure (HP) water and then connect it in parallel with a proper section of the HP economizer of the HRSG. In a flowsheet with several heat/steam sources/users and multiple pressure levels, a large number of integration options are feasible and it is necessary to determine the best set. Furthermore, regarding the syngas cooler mentioned above, what is the optimal mass flow rate of MP and HP water to be economized, and MP steam to be evaporated? Are there other (additional) attractive heat recovery options? A common design rule is to maximize the production of steam/water which minimizes the heat transfer irreversibility (exergy loss) with the hot process stream (e.g., syngas), i.e., to maximize the production of higher pressure steam. In Section 10 we show that this heuristic rule may not be sufficient to design a HRSC and can lead to sub-optimal solutions because does not consider simultaneously the overall system.

We have proposed an approach which allows to optimize not only HRSGs of simple combined cycles but also any heat recovery steam cycle, even if integrated with external heat/steam sources/users and with multiple supplementary firing. The structure of the model allows a full heat integration between HRSC and process because the steam generator and the external process units can exchange steam/water at inlet and outlet of any tube bank, evaporation drum, and pressure level. Also the main turbine can exchange steam with steam sources and heat/steam users at variable pressures. Nevertheless the use of detailed models for the gas/steam/water properties and the main components (i.e., HRSG sections, FW pre-heaters and turbine sections), the nonlinear, non-smooth and discontinuous optimization problem can be solved in few minutes thanks to a really accurate linearization. Thermodynamic considerations and extensive sensitivity analysis confirm that our linear programming approximation and two-stage algorithm provide robust and close-to-optimal solutions. In addition, the linearity of the lower level program guarantees that the optimal layout is simple, i.e., characterized by few tube banks and few connecting flows. This last feature makes the method not just a theoretically interesting exercise but also an effective tool for designing real plants and defining the optimal configuration of the HRSC. The test cases show that the design obtained by the HRSC Optimizer can be much more efficient than those derived by expert engineers. Obviously the difference in efficiency depends not only on technical features (i.e., the configuration of the steam cycle, the level of integration between the process and the steam cycle, etc.) but also on the experience of the designer. Therefore we have considered designs related to different applications and coming from different research groups. Moreover, in the HRSC methodology, if the CPSO finds exactly the global optimum and the pinch point temperature differences are equal to the minimum specified values (so that the linear programming approximation is zero), the returned solution is exactly the global optimum of the HRSC design problem. If the pinch point temperature differences are greater than the minimum specified values a negligible error is introduced by the linearization of the flue gases specific heat capacities at constant pressure. From a practical point of view, the key advantage of the HRSC Optimizer over the usual practice approach is the simultaneous optimization of the overall key variables: steam/water mass flow rates raised in both the steam generator and the process units, pinch point temperature differences of the HRSG, intensive variables of the steam cycle (i.e., evaporation pressures and superheat temperatures), pressures and mass flow rates of turbine extractions for FW pre-heating, and fuel mass flow rates for supplementary firing. Thanks to this simultaneous optimization and the high degree of integration allowed by the model, all the recoverable thermal power is exploited with the maximum efficiency. Another positive feature of the proposed two-stage algorithm is the short computing time which allows the user to vary the input parameters and/or data and repeat the design of the steam cycle in a few minutes. The HRSC Optimizer may be a very useful tool to optimize the total plant (i.e., process, HEN and steam cycle) because it can be easily coupled with process optimization and heat integration techniques. The HRSC Optimizer could be significantly improved by introducing cost related data and integer variables in order to (1) optimize the net present value of the steam cycle or the cost of electricity instead of efficiency, (2) perform not only the design but also the synthesis of the steam network starting from a steam superstructure, (3) select automatically the steam turbine sections from a turbine catalogue, (4) perform the automatic synthesis of heat and power utility systems by matching mechanical users with electric drivers, gas turbines and steam turbines. However, the addition of integer variables increases significantly the computational difficulty of the optimization problem, turning the already challenging NLP into a much more complex MINLP. At the present time the same paradigm of the HRSC Optimizer is being applied to the design of fired steam cycles with either subcritical or supercritical boilers integrated with external heat exchangers and units.