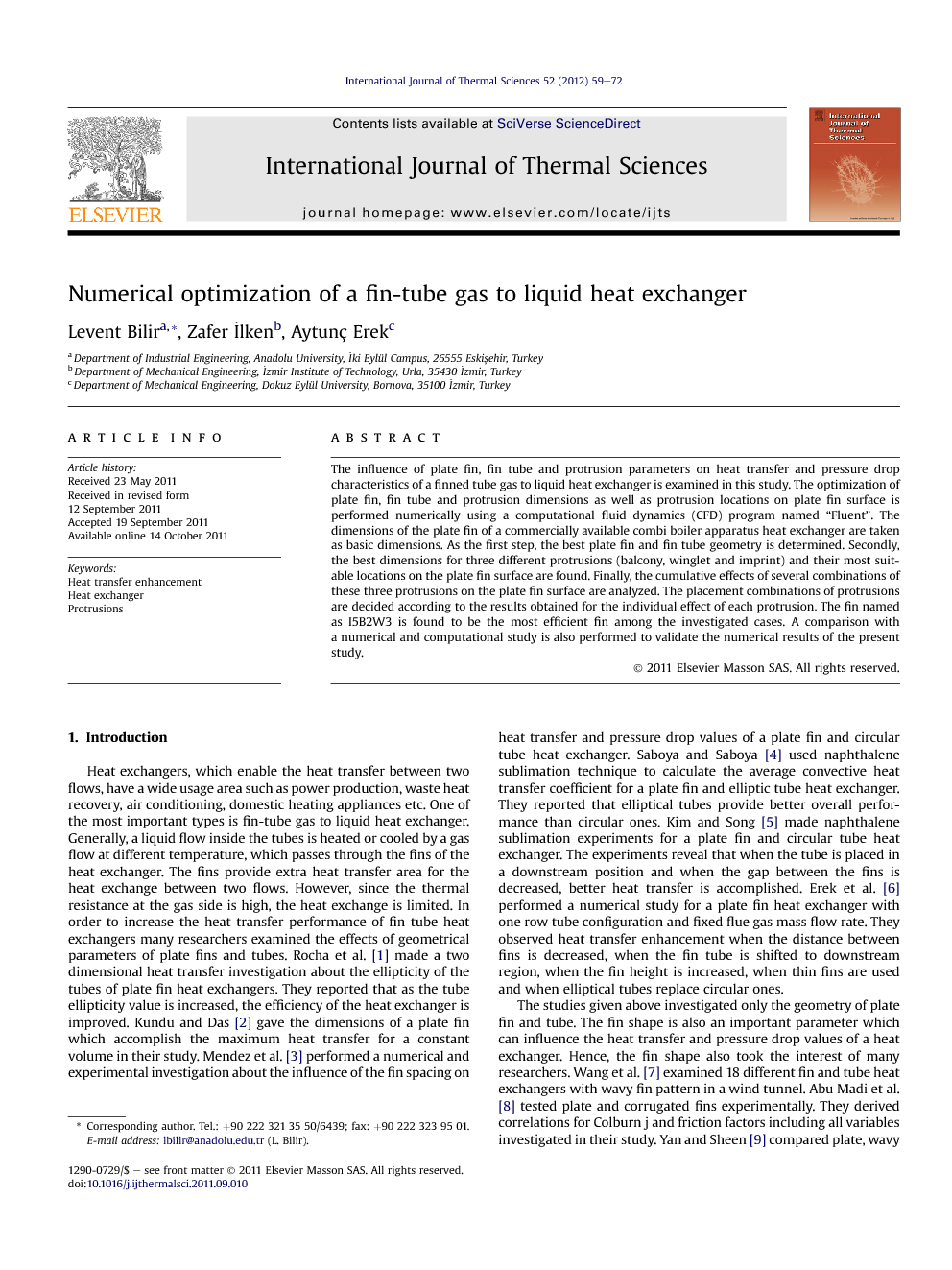 The influence of plate fin, fin tube and protrusion parameters on heat transfer and pressure drop characteristics of a finned tube gas to liquid heat exchanger is examined in this study. The optimization of plate fin, fin tube and protrusion dimensions as well as protrusion locations on plate fin surface is performed numerically using a computational fluid dynamics (CFD) program named “Fluent”. The dimensions of the plate fin of a commercially available combi boiler apparatus heat exchanger are taken as basic dimensions. As the first step, the best plate fin and fin tube geometry is determined. Secondly, the best dimensions for three different protrusions (balcony, winglet and imprint) and their most suitable locations on the plate fin surface are found. Finally, the cumulative effects of several combinations of these three protrusions on the plate fin surface are analyzed. The placement combinations of protrusions are decided according to the results obtained for the individual effect of each protrusion. The fin named as I5B2W3 is found to be the most efficient fin among the investigated cases. A comparison with a numerical and computational study is also performed to validate the numerical results of the present study.

In this study, the optimization of the fin, fin tube and protrusion geometries of a finned tube heat exchanger is performed. Additionally, the best location of the protrusions on the plate fin surface is determined. The investigated parameters of the plate fin and fin tube geometry are; fin height and fin tube thickness, fin tube location and ellipticity, fin shape (waviness). Furthermore, three different protrusions are examined in the study. These are balcony, winglet and imprint type protrusions. The individual as well as cumulative effects of these three different protrusions on the heat transfer and pressure drop characteristics of the finned tube heat exchanger are also investigated numerically. The parameters examined for protrusions can be summarized as; protrusion height, width and radius, protrusion length between two fins and protrusion location on fin. The numerical analyses are performed using boundary conditions which are taken from the actual operating conditions of a combi boiler heater taken as the practical model for the present study. The results of the parametric study about plate fin geometry indicate that a plate fin with a fin height value of 40 mm, a fin tube thickness value of 0.6 mm, a fin tube, placed at a 18.5 mm away from the bottom point of the fin, with an ellipticity value of 0.45 and a wave height of 2 mm provides the best performance. The parametric study about the protrusions reveals that the balcony with a 3 mm height and a 1.5 mm length in the gap between two fins, the winglet with a 3 mm width and a 1.8 mm length in the gap between two fins and the imprint with a 7 mm radius and a 2.425 mm length in the gap between two fins are the best ones among the investigated cases. The best location of each protrusion on the fin surface is found as location 4 shown in Fig. 2(f). Finally, the investigation of the cumulative effect of three protrusions shows that the use of three protrusions provides better heat transfer performance compared to the case with only one protrusion. However, a pressure drop increase is also observed with the use of three protrusions together. But it is also observed that the flue gas pressure drop increase due to the usage of protrusions can be considered as modest. The best fin is determined as I5B2W3 according to the obtained numerical results and the optimization study is concluded with this outcome.