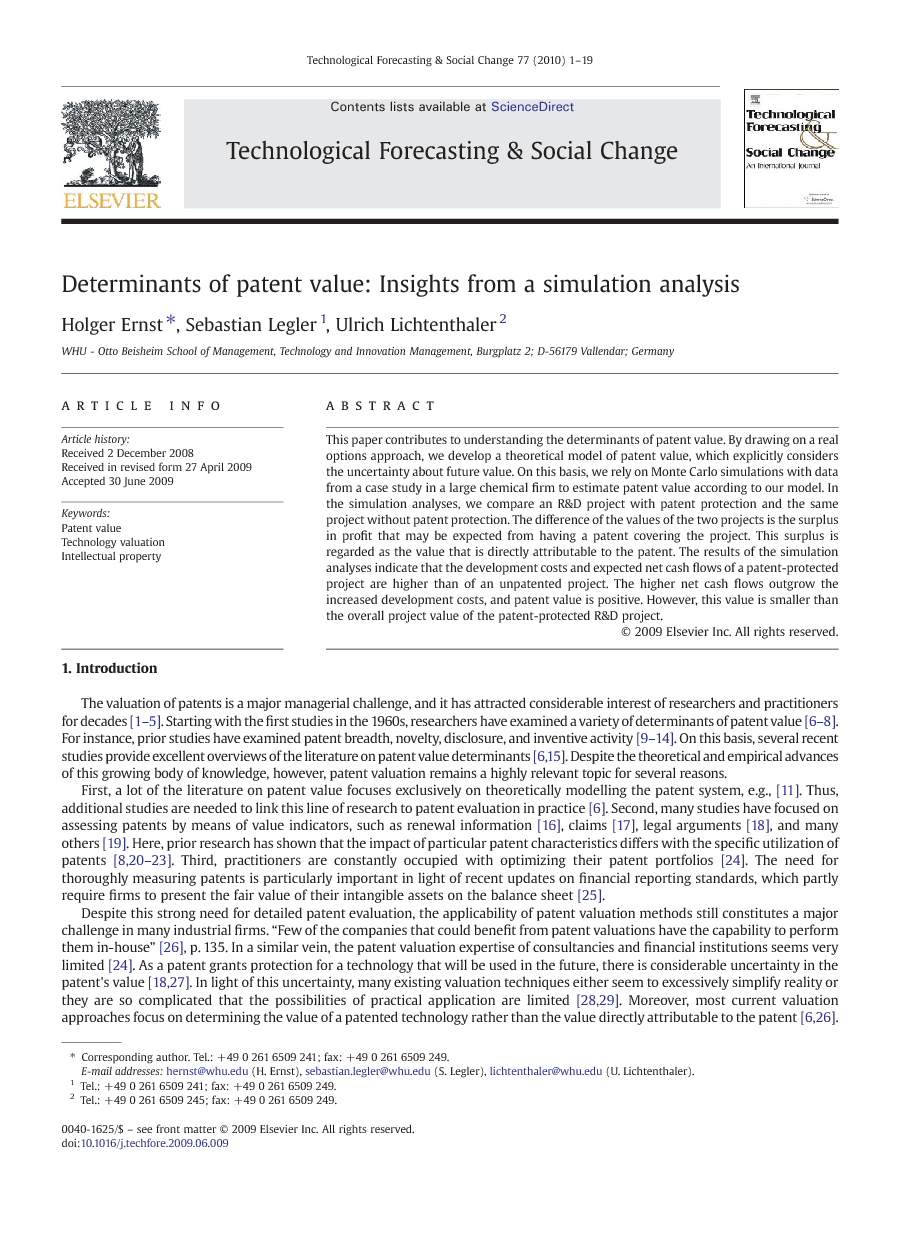 This paper contributes to understanding the determinants of patent value. By drawing on a real options approach, we develop a theoretical model of patent value, which explicitly considers the uncertainty about future value. On this basis, we rely on Monte Carlo simulations with data from a case study in a large chemical firm to estimate patent value according to our model. In the simulation analyses, we compare an R&D project with patent protection and the same project without patent protection. The difference of the values of the two projects is the surplus in profit that may be expected from having a patent covering the project. This surplus is regarded as the value that is directly attributable to the patent. The results of the simulation analyses indicate that the development costs and expected net cash flows of a patent-protected project are higher than of an unpatented project. The higher net cash flows outgrow the increased development costs, and patent value is positive. However, this value is smaller than the overall project value of the patent-protected R&D project.

The valuation of patents is a major managerial challenge, and it has attracted considerable interest of researchers and practitioners for decades [1], [2], [3], [4] and [5]. Starting with the first studies in the 1960s, researchers have examined a variety of determinants of patent value [6], [7] and [8]. For instance, prior studies have examined patent breadth, novelty, disclosure, and inventive activity [9], [10], [11], [12], [13] and [14]. On this basis, several recent studies provide excellent overviews of the literature on patent value determinants [6] and [15]. Despite the theoretical and empirical advances of this growing body of knowledge, however, patent valuation remains a highly relevant topic for several reasons. First, a lot of the literature on patent value focuses exclusively on theoretically modelling the patent system, e.g., [11]. Thus, additional studies are needed to link this line of research to patent evaluation in practice [6]. Second, many studies have focused on assessing patents by means of value indicators, such as renewal information [16], claims [17], legal arguments [18], and many others [19]. Here, prior research has shown that the impact of particular patent characteristics differs with the specific utilization of patents [8], [20], [21], [22] and [23]. Third, practitioners are constantly occupied with optimizing their patent portfolios [24]. The need for thoroughly measuring patents is particularly important in light of recent updates on financial reporting standards, which partly require firms to present the fair value of their intangible assets on the balance sheet [25]. Despite this strong need for detailed patent evaluation, the applicability of patent valuation methods still constitutes a major challenge in many industrial firms. “Few of the companies that could benefit from patent valuations have the capability to perform them in-house” [26], p. 135. In a similar vein, the patent valuation expertise of consultancies and financial institutions seems very limited [24]. As a patent grants protection for a technology that will be used in the future, there is considerable uncertainty in the patent's value [18] and [27]. In light of this uncertainty, many existing valuation techniques either seem to excessively simplify reality or they are so complicated that the possibilities of practical application are limited [28] and [29]. Moreover, most current valuation approaches focus on determining the value of a patented technology rather than the value directly attributable to the patent [6] and [26]. To deepen our understanding of patent valuation, we therefore adopt a perspective that differs from many prior works and complements earlier studies. Thus, we contribute to the literature in several ways. First, we explicitly take into account uncertainty about future value by applying a real options perspective on patent valuation [30], [31] and [32]. Second, we rely on Monte Carlo simulations with data from a case study in a large chemical firm to estimate the value of a patent according to our model. At the current state of research into patent evaluation [3] and [15], the particular characteristics of simulation analyses, e.g., internal validity and experimentation benefits [33], provide major opportunities for gaining new insights. On this basis, our study identifies major starting points for future empirical research into the determinants of patent value. Third, despite using real options and Monte Carlo simulations, we take a managerial perspective that is directed towards developing valuation methods for firms and policy makers [24]. The application of our methods may be directly implemented by practitioners. Thus, this paper attempts to bridge the gap between closeness to reality and managerial applicability in patent evaluation [34]. Fourth, we focus on a patent's financial value as the surplus in profit that derives from comparing a specific R&D project with patent protection and the same project without patent protection. Specifically, we concentrate on a patent that is used for protecting a technology, which is currently developed and will subsequently be applied in a firm's own products. Fifth and related to the last point, we focus on valuing a patent per se rather than estimating the overall value of a patented technology [35] and [36]. The remainder of this article is structured as follows. In section 2, we present an overview of different approaches to patent evaluation. In section 3, we develop a dynamic real-option-based model of patent value. In section 4, we use Monte Carlo simulations based on real data of a patented R&D project in the chemical industry to illustrate the practical usefulness of our model. In the simulations, we compare an R&D project with patent protection and the same project without patent protection to determine the value of the patent per se. Detailed sensitivity analyses deepen our understanding of the determinants of patent value. In section 5, we analyze the study's theoretical and managerial implications. Finally, we discuss the study's limitations and present opportunities for further research.