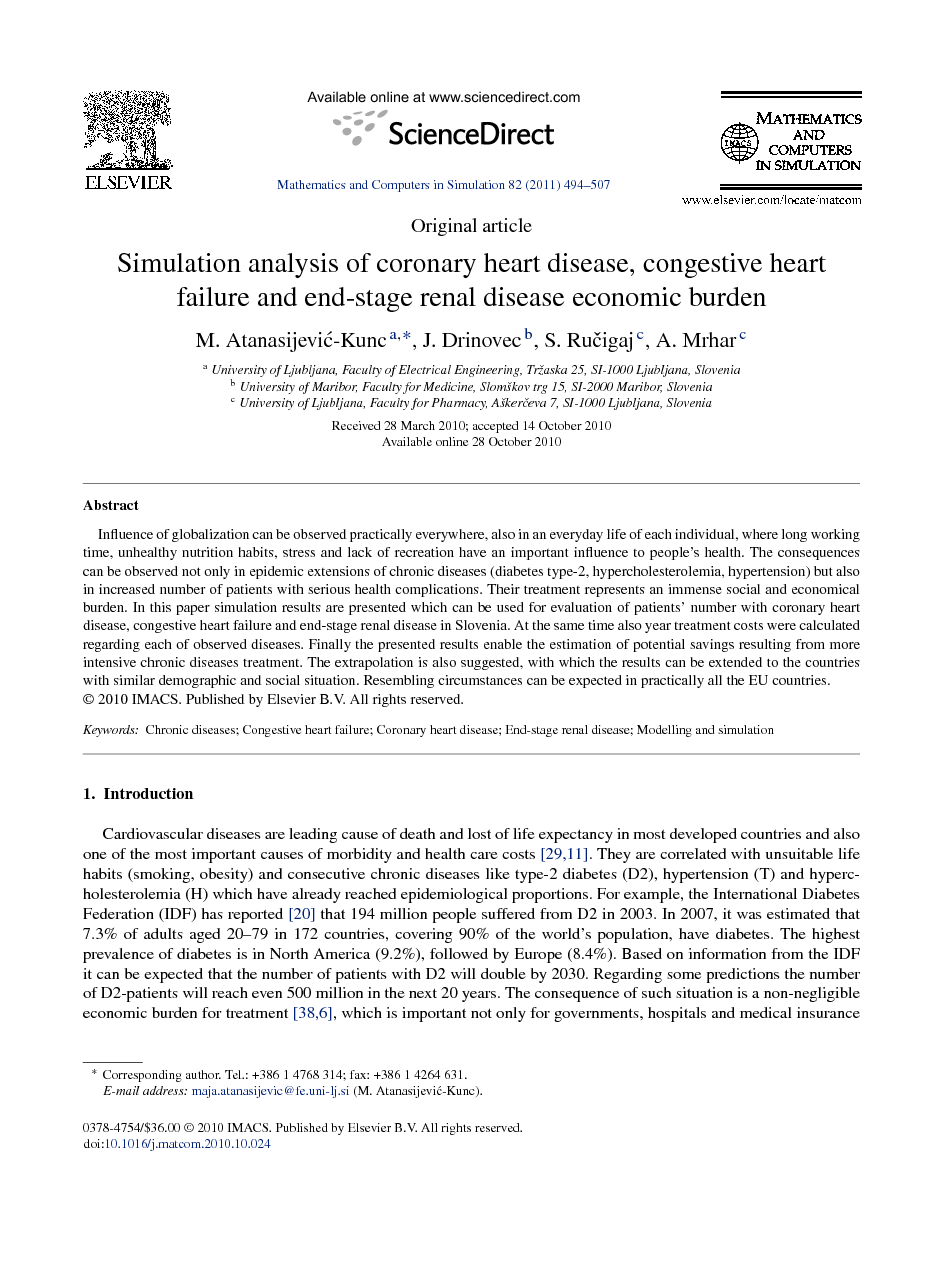 Influence of globalization can be observed practically everywhere, also in an everyday life of each individual, where long working time, unhealthy nutrition habits, stress and lack of recreation have an important influence to people’s health. The consequences can be observed not only in epidemic extensions of chronic diseases (diabetes type-2, hypercholesterolemia, hypertension) but also in increased number of patients with serious health complications. Their treatment represents an immense social and economical burden. In this paper simulation results are presented which can be used for evaluation of patients’ number with coronary heart disease, congestive heart failure and end-stage renal disease in Slovenia. At the same time also year treatment costs were calculated regarding each of observed diseases. Finally the presented results enable the estimation of potential savings resulting from more intensive chronic diseases treatment. The extrapolation is also suggested, with which the results can be extended to the countries with similar demographic and social situation. Resembling circumstances can be expected in practically all the EU countries.

Cardiovascular diseases are leading cause of death and lost of life expectancy in most developed countries and also one of the most important causes of morbidity and health care costs [29] and [11]. They are correlated with unsuitable life habits (smoking, obesity) and consecutive chronic diseases like type-2 diabetes (D2), hypertension (T) and hypercholesterolemia (H) which have already reached epidemiological proportions. For example, the International Diabetes Federation (IDF) has reported [20] that 194 million people suffered from D2 in 2003. In 2007, it was estimated that 7.3% of adults aged 20–79 in 172 countries, covering 90% of the world’s population, have diabetes. The highest prevalence of diabetes is in North America (9.2%), followed by Europe (8.4%). Based on information from the IDF it can be expected that the number of patients with D2 will double by 2030. Regarding some predictions the number of D2-patients will reach even 500 million in the next 20 years. The consequence of such situation is a non-negligible economic burden for treatment [38] and [6], which is important not only for governments, hospitals and medical insurance companies, but also for individuals, especially when taking into account also the significant influence of these diseases and risk factors on serious health complications [5] and [7]. The aim of this simulation study is to identify the main dynamic properties of coronary heart disease (CHD), congestive heart failure (CHF) and end-stage renal disease (ESRD), to estimate the number of patients in terms of age (also regarding smaller countries where national registries for all the mentioned diseases are not available), to estimate the treatment costs for each of the observed diseases, to predict the social burden of treatment, to estimate and evaluate possible savings, and to enable model extensions, with which a study of an ageing population’s influence on the distribution of diseases as well as the economic burden would be possible. Model, which would fulfill all desired properties and aspects and would be at the same time also reasonably complex regarding the purpose of model usage, was not directly available in spite of the great number of publications in the area of health care. Reported modelling results can be divided regarding several different criteria. From mathematical and/or engineering point of view they are usually distinguished regarding the form of used equations, used modelling approach (theoretical modelling, identification or combination of both) and/or computer realization. So models can be static or dynamic, linear or nonlinear, continuous or discrete, time-invariant or time-constant, deterministic or stochastic, with lumped or distributed parameters [31] and [16]. From the viewpoint of the area and modelling goals, differentiation is even more heterogeneous [26], [13] and [48]. Approaches can be distinguished not only regarding the form of used mathematical description, but also regarding several other important facts, like the level which can spread from cell metabolism and/or observation of individual patient [35], [46], [9] and [28] to global (epidemiological) system description [6], [5] and [7] and [12], [34], [37] and [27]. In both situations it is possible to study the development of one or several diseases (or some other processes of interest), where in some cases also their interdependence is taken into account. As human body, as well as other living systems, comprises a great number of close-loop mechanisms, models can be interpreted as open or close-loop [6], [5], [24] and [43]. In some cases modelling results are combined with healing influences which further enable also the extensions to economical aspects of disease development and the study of cost and cost-effectiveness of strategies and epidemiology [6], [5], [14] and [33]. According to Ref. [4], four main kinds of mathematical models in health care exist: biological modelling, clinical medicine, operations research and economic/system resources. Therefore the authors presented Archimedes, a new type of mathematical model, which includes all four components. This is very detailed and complex continuous simulation model connecting biological details, care processes and logistics to costs of health care systems. For our purposes and goals such model is of course far too complex. The presented solution is restricted mainly to a quantitative evaluation of observed diseases and their influence on serious health complications and treatment expenses, which were evaluated for Slovenia. Then an extrapolation is suggested, which can be applied to countries with similar demographic and social situation [2]. It can be presumed that the circumstances are similar in practically all the EU countries. The modelling and simulations were realized in Matlab [32] and Simulink [45]. The work is organized as follows. First, model development is described, where special attention is given to its structure, which enables the sequential building of a dynamic system, taking into account all the observed risk factors, diseases, population distribution and treatment costs. In the next section model predictions regarding the development of CHF, CHD and ESRD are discussed. In Section 4 the influence of extended chronic diseases treatment to reduction of mentioned complications and treatment costs are discussed. The paper ends with concluding remarks and some suggestions for future work.

In this paper modelling and simulation results are presented illustrating the development of coronary heart disease, congestive heart failure and end-stage renal disease in the population where also smokers and obese people are included as well as the patients with three chronic diseases, diabetes type-2, hypercholesterolemia and hypertension. It is possible to differ among treated and untreated patients too. Mentioned chronic diseases have in many countries reached epidemic extensiveness. Due to a changed lifestyle and an aging population they have become significant social and economic burdens, important for governments, hospitals, health-insurance companies and, regarding educational programs, for the whole population. In many countries (especially smaller) national registers for such health problems do not exist (or are available only for some of the mentioned diseases). So the expectations have to be estimated regarding epidemiological data. The developed dynamical model shows that in European countries within a population of one million people the following can be expected: • the annual costs for the treatment of chronic diseases are approximately 171 million euro, • about 2.8% of the population experiences a coronary heart disease, which represents an annual cost of 312 million euro, • about 1.8% develop congestive heart failure, what represents annual treatment costs of approximately 50 million euro, • 0.069% of population develop end-stage renal disease and 49.5 million euro is needed per year for this group of patients. Regarding model predictions it can also be expected that: • for all patients diagnosed for chronic diseases (on the basis of more systematic medical examinations) the annual costs would increase for 74.5 million euro regarding the population of one million people. But this “initial” investment would result in: • fewer patients with hypercholesterolemia (12 600 less in one million people), • fewer CHD patients (more than 4500 less patients in one million people), • less CHF patients (more than 1200 less patients in one million people), • less ESRD patients (more than 230 less patients in one million people), • an important improvement in the quality of life. Taking into account the reduced number of patients the initial investment would be decreased for more than 70.5 million euro only regarding CHD, CHF and ESRD. However, such prevention would decrease also the number of patients with strokes and peripheral arterial-vascular disease. Therefore it can be expected that the investment would be justified also from the economical point of view. A dynamic interpretation of the demographic situation will also be added in a future as population aging is becoming an increasingly important problem.