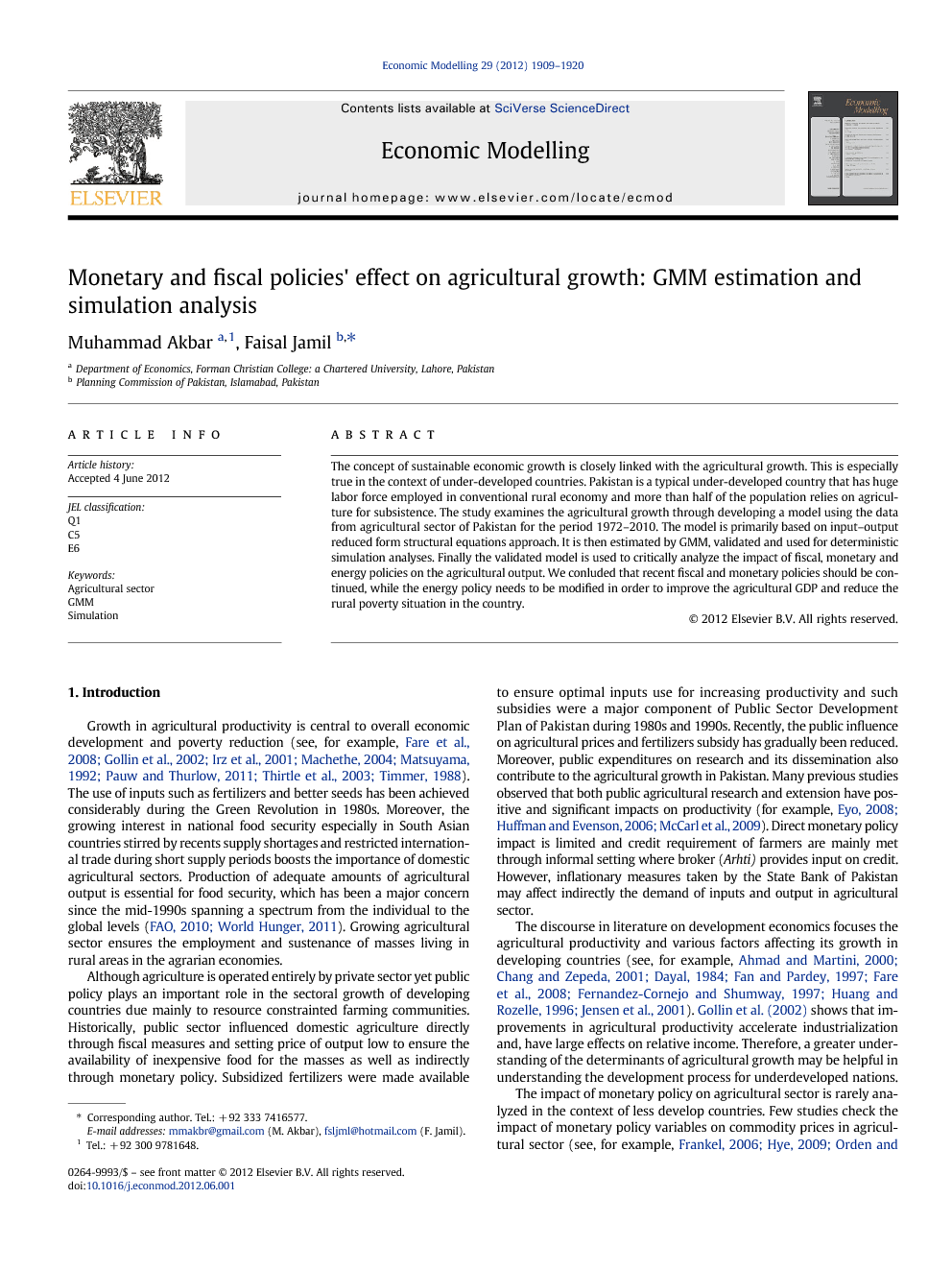 The concept of sustainable economic growth is closely linked with the agricultural growth. This is especially true in the context of under-developed countries. Pakistan is a typical under-developed country that has huge labor force employed in conventional rural economy and more than half of the population relies on agriculture for subsistence. The study examines the agricultural growth through developing a model using the data from agricultural sector of Pakistan for the period 1972–2010. The model is primarily based on input–output reduced form structural equations approach. It is then estimated by GMM, validated and used for deterministic simulation analyses. Finally the validated model is used to critically analyze the impact of fiscal, monetary and energy policies on the agricultural output. We conluded that recent fiscal and monetary policies should be continued, while the energy policy needs to be modified in order to improve the agricultural GDP and reduce the rural poverty situation in the country.

Growth in agricultural productivity is central to overall economic development and poverty reduction (see, for example, Fare et al., 2008, Gollin et al., 2002, Irz et al., 2001, Machethe, 2004, Matsuyama, 1992, Pauw and Thurlow, 2011, Thirtle et al., 2003 and Timmer, 1988). The use of inputs such as fertilizers and better seeds has been achieved considerably during the Green Revolution in 1980s. Moreover, the growing interest in national food security especially in South Asian countries stirred by recents supply shortages and restricted international trade during short supply periods boosts the importance of domestic agricultural sectors. Production of adequate amounts of agricultural output is essential for food security, which has been a major concern since the mid-1990s spanning a spectrum from the individual to the global levels (FAO, 2010 and World Hunger, 2011). Growing agricultural sector ensures the employment and sustenance of masses living in rural areas in the agrarian economies. Although agriculture is operated entirely by private sector yet public policy plays an important role in the sectoral growth of developing countries due mainly to resource constrainted farming communities. Historically, public sector influenced domestic agriculture directly through fiscal measures and setting price of output low to ensure the availability of inexpensive food for the masses as well as indirectly through monetary policy. Subsidized fertilizers were made available to ensure optimal inputs use for increasing productivity and such subsidies were a major component of Public Sector Development Plan of Pakistan during 1980s and 1990s. Recently, the public influence on agricultural prices and fertilizers subsidy has gradually been reduced. Moreover, public expenditures on research and its dissemination also contribute to the agricultural growth in Pakistan. Many previous studies observed that both public agricultural research and extension have positive and significant impacts on productivity (for example, Eyo, 2008, Huffman and Evenson, 2006 and McCarl et al., 2009). Direct monetary policy impact is limited and credit requirement of farmers are mainly met through informal setting where broker (Arhti) provides input on credit. However, inflationary measures taken by the State Bank of Pakistan may affect indirectly the demand of inputs and output in agricultural sector. The discourse in literature on development economics focuses the agricultural productivity and various factors affecting its growth in developing countries (see, for example, Ahmad and Martini, 2000, Chang and Zepeda, 2001, Dayal, 1984, Fan and Pardey, 1997, Fare et al., 2008, Fernandez-Cornejo and Shumway, 1997, Huang and Rozelle, 1996 and Jensen et al., 2001). Gollin et al. (2002) shows that improvements in agricultural productivity accelerate industrialization and, have large effects on relative income. Therefore, a greater understanding of the determinants of agricultural growth may be helpful in understanding the development process for underdeveloped nations. The impact of monetary policy on agricultural sector is rarely analyzed in the context of less develop countries. Few studies check the impact of monetary policy variables on commodity prices in agricultural sector (see, for example, Frankel, 2006, Hye, 2009 and Orden and Fackler, 1989). In a recent study, Eyo (2008) finds that the exchange rate regime has not encouraged agricultural export while, agricultural credit is insignificant in affecting agricultural output growth. In recent years, monetary authorities have been adjusting interest rate after every three months in Pakistan keeping in view the economic conditions. On the fiscal side, energy subsidies have been reduced gradually due to contraints resulting in successive increases in energy prices during the last few years.2 The impact of energy policy on agricultural sector is an ignored area and we could not find any study examining this issue. This study contributes in many ways to the existing literature. We develop an econometric model of Pakistan based on input–output framework using reduced form structural approach. Later, we conduct simulation to analyze the impact of interest rate shocks and various increases in energy price index on agricultural sector. Our study extends to previous literature on policy role in agricultural sector modeling both in breadth (i.e. consideration sub-sectors) and analytical scope (i.e. model estimation through the recent econometric methodology). The development of agricultural sector models and identifying interactions with other macroeconomic variables has long history. Byerlee and Halter (1974) develops a simple simulation model for Nigeria built on an input–output framework that enables interactions in the product and labor markets. The study illustrates through linkage with an agricultural simulation model and evaluate alternative agricultural policies. Roop and Zeitner (1977) also develops agricultural sector model integrated into a larger macroeconomic model in order to identify the relationship between agriculture and rest of the economy. Some studies focus on the price formation of agricultural output while examining the relationship between agricultural sector and macroeconomic environment and finds significant bilateral causal relationship between macroeconomic variables and those refering to price formation in the sector. It shows that the macroeconomic policies and decisions strongly affect the agricultral sector and price stability (see, Dritsakis, 2003, Eckstein, 1984 and Hye, 2009). In spite of long history of such econometric modeling for policy making, partial equilibrium model construction is less frequent in developing countries. The problem with scattered commodity level models is that these are poorly integrated with national or agricultural systems, severely limiting their uses in practical work. This leads to the so-called traditional paradox of “meaningful parts forming meaningless whole” in agricultural model research (Chen, 1977). The remainder of the paper is organized as follows. In the Section 2, we provide the structure of agricultural sector in Pakistan. Section 3 presents the specification of the model and methodology and data is described in Section 4. 5 and 6 put forward respectively the estimation results and validation of the model. The simulation analysis is presented at Section 7 while Section 8 concludes.

Agricultural sector is essential to provide livelihood to masses in developing countries. Previous studies illustrate the potential of agricultural sector in economic growth and poverty reduction. The study develops a simple simulation model built on an input–output framework thereby, attempts to achieve two objectives. Firstly, it specifies, estimates and validates an econometric model that can be used in evaluating the policy effects targeting the agricultural sector of Pakistan. Secondly, the study applies the model in evaluating the possible effects of macroeconomic policies on agricultural sector. The model covers disaggregated output at three sub-sectors, input demands, sectoral output prices, monetary and fiscal sector variables and overall price level in the economy. Behavioural equations are estimated separately by using GMM. Overall the estimated equations provide reasonably good fit. The model is then deterministically solved as a system of equations by using Gauss-Seidel technique to get dynamic solution of the model for different simulation experiments. Historical simulation experiment establishes validity of the model. Other simulation experiments are conducted to analyze impact of interest rate shocks and to conduct multiplier analysis of energy price index. Three policy recommendations can be derived from the study. First, the government should focus on general infrastructural investment instead of public investment in agricultural sector to due its crowding-out effect in Pakistan. Recent fiscal policy matches to our findings. Second, interest rate shock does not have much influence on agricultural growth. However, it is a useful instrument to control food inflation in the economy. Therefore, recent policy of higher level of interest rate will be helpful to control inflation in the economy without hurting agricultural sector. Third, multiplier analysis of energy price index clearly establishes that increase in energy prices exerts significant adverse impact on agricultural sector. For every increase of 15 percentage points in energy prices results in loss of one percentage point growth of agricultural output and 7.5 percentage points increase in food inflation. Agricultural sector is found a victim of recent increases in energy prices. The energy policy may be reviewed to help this under-privileged sector and to solve the livelihood issues of farming community in Pakistan. The developed model may also be used for conducting various other simulation experiments. Further improvements of the model are expected with its continued application to the analysis of agricultural sector of Pakistan.