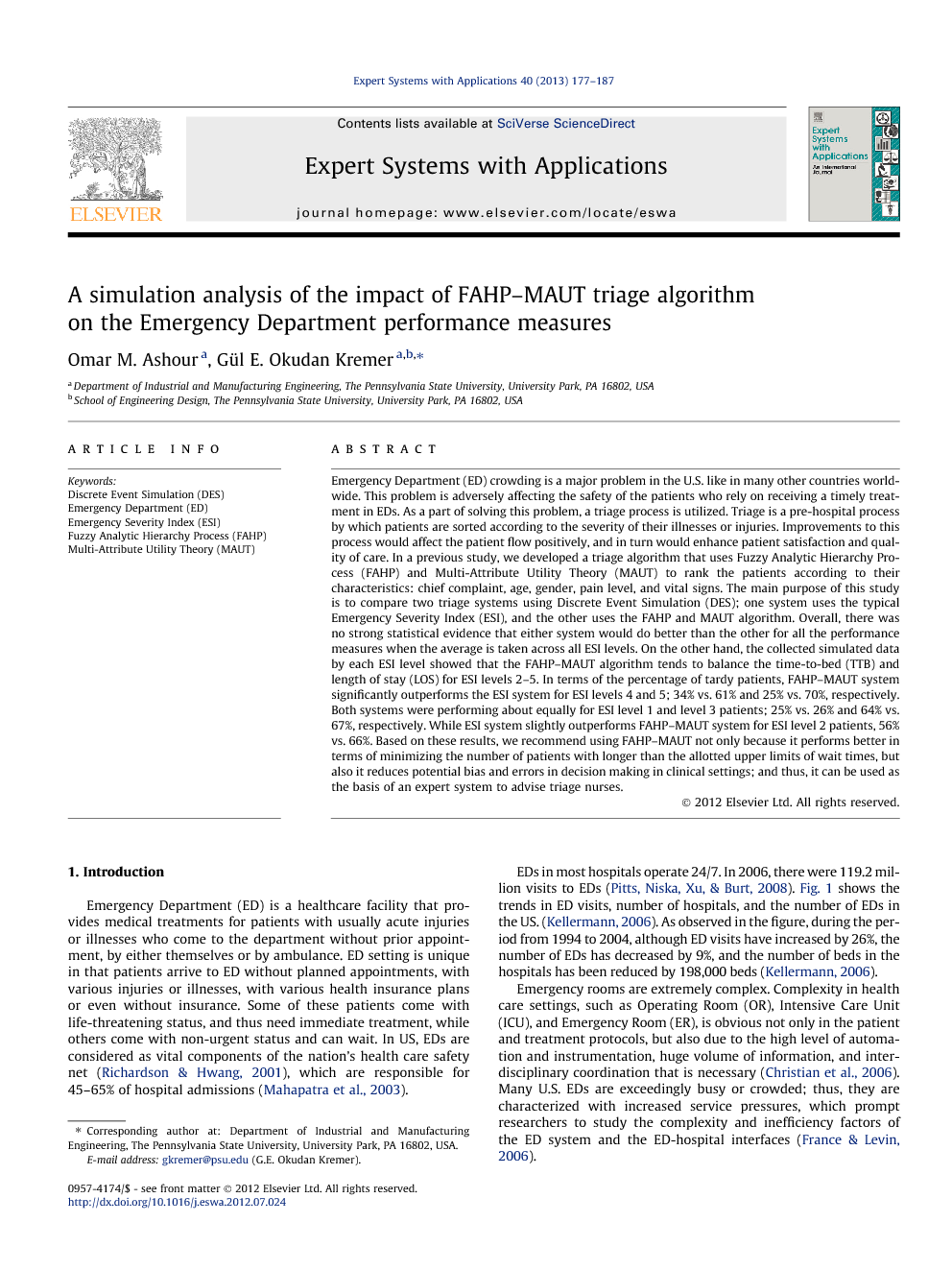 Emergency Department (ED) crowding is a major problem in the U.S. like in many other countries world-wide. This problem is adversely affecting the safety of the patients who rely on receiving a timely treatment in EDs. As a part of solving this problem, a triage process is utilized. Triage is a pre-hospital process by which patients are sorted according to the severity of their illnesses or injuries. Improvements to this process would affect the patient flow positively, and in turn would enhance patient satisfaction and quality of care. In a previous study, we developed a triage algorithm that uses Fuzzy Analytic Hierarchy Process (FAHP) and Multi-Attribute Utility Theory (MAUT) to rank the patients according to their characteristics: chief complaint, age, gender, pain level, and vital signs. The main purpose of this study is to compare two triage systems using Discrete Event Simulation (DES); one system uses the typical Emergency Severity Index (ESI), and the other uses the FAHP and MAUT algorithm. Overall, there was no strong statistical evidence that either system would do better than the other for all the performance measures when the average is taken across all ESI levels. On the other hand, the collected simulated data by each ESI level showed that the FAHP–MAUT algorithm tends to balance the time-to-bed (TTB) and length of stay (LOS) for ESI levels 2–5. In terms of the percentage of tardy patients, FAHP–MAUT system significantly outperforms the ESI system for ESI levels 4 and 5; 34% vs. 61% and 25% vs. 70%, respectively. Both systems were performing about equally for ESI level 1 and level 3 patients; 25% vs. 26% and 64% vs. 67%, respectively. While ESI system slightly outperforms FAHP–MAUT system for ESI level 2 patients, 56% vs. 66%. Based on these results, we recommend using FAHP–MAUT not only because it performs better in terms of minimizing the number of patients with longer than the allotted upper limits of wait times, but also it reduces potential bias and errors in decision making in clinical settings; and thus, it can be used as the basis of an expert system to advise triage nurses.

Emergency Department (ED) is a healthcare facility that provides medical treatments for patients with usually acute injuries or illnesses who come to the department without prior appointment, by either themselves or by ambulance. ED setting is unique in that patients arrive to ED without planned appointments, with various injuries or illnesses, with various health insurance plans or even without insurance. Some of these patients come with life-threatening status, and thus need immediate treatment, while others come with non-urgent status and can wait. In US, EDs are considered as vital components of the nation’s health care safety net (Richardson & Hwang, 2001), which are responsible for 45–65% of hospital admissions (Mahapatra et al., 2003). EDs in most hospitals operate 24/7. In 2006, there were 119.2 million visits to EDs (Pitts, Niska, Xu, & Burt, 2008). Fig. 1 shows the trends in ED visits, number of hospitals, and the number of EDs in the US. (Kellermann, 2006). As observed in the figure, during the period from 1994 to 2004, although ED visits have increased by 26%, the number of EDs has decreased by 9%, and the number of beds in the hospitals has been reduced by 198,000 beds (Kellermann, 2006). Emergency rooms are extremely complex. Complexity in health care settings, such as Operating Room (OR), Intensive Care Unit (ICU), and Emergency Room (ER), is obvious not only in the patient and treatment protocols, but also due to the high level of automation and instrumentation, huge volume of information, and interdisciplinary coordination that is necessary (Christian et al., 2006). Many U.S. EDs are exceedingly busy or crowded; thus, they are characterized with increased service pressures, which prompt researchers to study the complexity and inefficiency factors of the ED system and the ED-hospital interfaces (France & Levin, 2006). Every minute in the ED can make a big difference for patients. EDs usually implement a triage algorithm to assign a priority level for the coming patients. Triage is a pre-hospital process by which the triage nurse sorts the patients according to the severity of their illness or injury. The purpose of the triage interview is to place the patient in one of several queues, each having an associated maximum time until the patient sees a physician (Guterman, Mankovich, & Hiller, 1993). In this paper, we present our investigation of the impact of using the Fuzzy Analytic Hierarchy Process (FAHP) and Multi-Attribute Utility Theory (MAUT) triage algorithm, and compare the ED performance measures under the conditions of using the aforementioned algorithm and the widely used Emergency Severity Index (ESI) algorithm. As explained later in the paper, although widely used, the ESI algorithm heavily relies on the judgment of the triage nurse, whereas the FAHP–MAUT triage algorithm makes use of quantitative triage knowledge in arriving at patient prioritization, and thus, if FAHP–MAUT algorithm is found to perform as good or better in realistic conditions, it will be conceivable to develop an expert system to aid nurse decision making. With these thoughts, we compare the algorithms based on system performance measures, i.e., time-to-bed (TTB), length of stay (LOS), throughput, time in ER, and percentage of tardy patients. The paper is organized as follows: Section 2 describes the findings of key papers from the pertinent literature. Section 3 presents the problem and the methodology that was followed to draw our conclusions. Section 4 shows the experimental design and the results. Section 5 summarizes the findings.

DES has been used as a tool to compare two ED systems: one system uses the current ESI while the other system uses FAHP–MAUT to prioritize ED patients. Because of the fact that the new system would lower the cognitive stress and load on the triage nurse, and would aid nurses to make better decisions, i.e. accurate and repeatable decisions for the same scenarios that they might face, we investigated the effect of using this algorithm on other system performance measures and compared it with the ESI system in terms of these measures (TTB, LOS, throughput, time in ER, and percentage of tardy patients). In reviewing the averages of the performance measures, the results showed that there is no strong statistical evidence that one system would do better than the other in terms of these performance measures. However, when the simulated data was reviewed by each ESI level, we found that the new algorithm balances the length of stay and the time-to-bed for ESI levels while the previous algorithm (ESI) showed huge differences in terms of these measures, for example, between ESI level 4 and Level 5. Statistical significance has been conducted for the time-to-bed as a performance measure; the conclusion is that the two systems are statistically different from each other, and the new algorithm outperforms the previous one for ESI levels 4 and 5, but the ESI system outperforms FAHP–MAUT system for ESI levels 2 and 3. Finally, both system are not statistically different for ESI level 1. Waiting time limits were established based on CTAS to measure the percentage of tardy patients whose TTB times are greater than these limits. FAHP–MAUT system outperforms the ESI system for ESI levels 4 and 5. Both systems almost perform equally for ESI level 1 and 3. On the other hand, ESI system slightly outperforms FAHP–MAUT system for ESI level 2. In view of all these results collectively, we recommend using FAHP–MAUT as it performs better in terms of minimizing the number of patients with waiting times longer than the allotted upper limits. Overall, the paper has presented the comparison of two triage algorithms in a dynamic and realistic situation. Given the patient and system related performance results, we recommend the use of FAHP–MAUT algorithm. This recommendation is also impacted by the fact that the typical ESI algorithm heavily relies on nurse judgments whereas FAHP–MAUT uses quantitative measures to arrive at a priority for each patient, making it possible for an expert system to be generated to propose prioritization to nurses; indeed, the work presented herein is considered as a step in this direction.