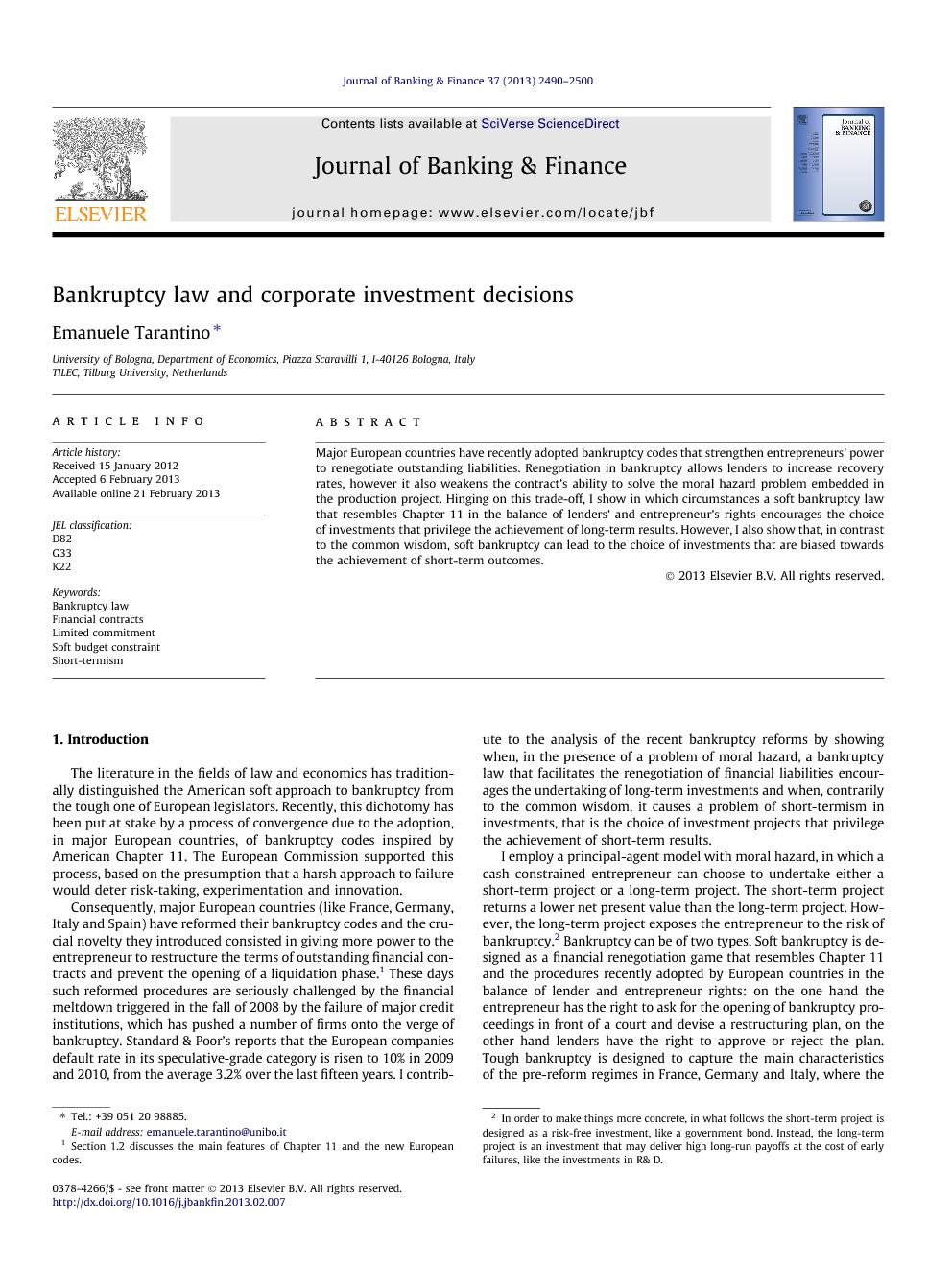 Major European countries have recently adopted bankruptcy codes that strengthen entrepreneurs’ power to renegotiate outstanding liabilities. Renegotiation in bankruptcy allows lenders to increase recovery rates, however it also weakens the contract’s ability to solve the moral hazard problem embedded in the production project. Hinging on this trade-off, I show in which circumstances a soft bankruptcy law that resembles Chapter 11 in the balance of lenders’ and entrepreneur’s rights encourages the choice of investments that privilege the achievement of long-term results. However, I also show that, in contrast to the common wisdom, soft bankruptcy can lead to the choice of investments that are biased towards the achievement of short-term outcomes.

The literature in the fields of law and economics has traditionally distinguished the American soft approach to bankruptcy from the tough one of European legislators. Recently, this dichotomy has been put at stake by a process of convergence due to the adoption, in major European countries, of bankruptcy codes inspired by American Chapter 11. The European Commission supported this process, based on the presumption that a harsh approach to failure would deter risk-taking, experimentation and innovation. Consequently, major European countries (like France, Germany, Italy and Spain) have reformed their bankruptcy codes and the crucial novelty they introduced consisted in giving more power to the entrepreneur to restructure the terms of outstanding financial contracts and prevent the opening of a liquidation phase.1 These days such reformed procedures are seriously challenged by the financial meltdown triggered in the fall of 2008 by the failure of major credit institutions, which has pushed a number of firms onto the verge of bankruptcy. Standard & Poor’s reports that the European companies default rate in its speculative-grade category is risen to 10% in 2009 and 2010, from the average 3.2% over the last fifteen years. I contribute to the analysis of the recent bankruptcy reforms by showing when, in the presence of a problem of moral hazard, a bankruptcy law that facilitates the renegotiation of financial liabilities encourages the undertaking of long-term investments and when, contrarily to the common wisdom, it causes a problem of short-termism in investments, that is the choice of investment projects that privilege the achievement of short-term results. I employ a principal-agent model with moral hazard, in which a cash constrained entrepreneur can choose to undertake either a short-term project or a long-term project. The short-term project returns a lower net present value than the long-term project. However, the long-term project exposes the entrepreneur to the risk of bankruptcy.2 Bankruptcy can be of two types. Soft bankruptcy is designed as a financial renegotiation game that resembles Chapter 11 and the procedures recently adopted by European countries in the balance of lender and entrepreneur rights: on the one hand the entrepreneur has the right to ask for the opening of bankruptcy proceedings in front of a court and devise a restructuring plan, on the other hand lenders have the right to approve or reject the plan. Tough bankruptcy is designed to capture the main characteristics of the pre-reform regimes in France, Germany and Italy, where the resolution of bankruptcy proceedings exhibited a clear bias towards the liquidation of the distressed company (Brouwer, 2006).3 My aim is to compare the impact of the soft bankruptcy game on firm’s investment choices with respect to the tough bankruptcy benchmark, in which liquidation follows automatically in the case of project’s failure. To show that renegotiation in bankruptcy affects the optimal contract (and thus the investment choice), I prove that lender’s behavior is characterized by limited commitment under a soft code. In the presence of continuation rents, financial renegotiation reduces the room for entrepreneur’s punishment in the case of bad performance: even if the original contract prescribes project’s termination, the lender allows production’s continuation provided recovery rates increase. This mechanism is borrowed from the literature on the “soft budget constraint” problem (Dewatripont and Maskin, 1995 and von Thadden, 1995; Kornai et al., 2003). However, while Dewatripont and Maskin, 1995 and von Thadden, 1995 focus on the benefits to a principal from the lack of commitment to remain tough with an agent, I show that in the presence of moral hazard limited commitment can also be costly. In the model, the softening of lender’s budget constraint generates the following trade-off. On the one hand, the renegotiation of the termination prescription increases ex post efficiency because the lender improves recovery rates, on the other hand it decreases ex ante efficiency because the prospect of renegotiation raises the agency rent that the lender needs to bear to restore entrepreneur’s incentives. This trade-off is taken from the literature on mutually advantageous renegotiation (e.g., among the others, Fudenberg and Tirole, 1990), my contribution to this literature consists in providing an analysis of the effects of renegotiation on ex ante investment’s time horizon: depending on whether recovery rates are able to offset the exacerbation of the incentive problem, soft bankruptcy can induce long-termism or short-termism in investment. I model the short-term project as a safe outside option that is not affected by moral hazard. Regarding the long-term project, its value is affected by a moral hazard problem and it exposes the entrepreneur to the risk of bankruptcy.4 In a setting with tough bankruptcy, contingent arrangements can be used to limit the incidence of the moral hazard problem—by punishing the entrepreneur after a bad outcome. If soft bankruptcy is introduced, and in the presence of continuation rents, contingent contracts are not renegotiation-proof: on the one hand, this dampens their ability to limit the moral hazard issue, on the other hand this allows them to deliver a larger payoff thanks to recovery rates. I show that, provided the increase in recovery rates is able to offset the exacerbation of the agency problem, long-term projects can still be implemented, otherwise soft bankruptcy causes a bias for short-termism. The short-termism result goes against the conventional wisdom that soft bankruptcy stimulates entrepreneurship and risk-taking (e.g., Acharya and Subramanian, 2009), however it is consistent with the empirical evidence concerning the effects caused by the strengthening of entrepreneur’s renegotiation power in bankruptcy on the cost of funding. A widespread empirical proxy for short-termism is the value of the interest rate spreads set by lenders on firms (Blume et al., 1980; Poterba and Summers, 1995): a higher cut-off value indicates higher pressure on a firm to achieve short-term results. Interestingly, Scott and Smith, 1986 and Rodano et al., 2012 find that the introduction of stronger entrepreneur’s protection to renegotiate outstanding liabilities in bankruptcy has lead to more costly funding contracts. Scott and Smith (1986) study the effects of the 1978 bankruptcy reform in the United States, Rodano et al. (2012) focus on the impact of the recent Italian bankruptcy reform. Both pieces of empirical evidence clearly support the short-termism result.

The model challenges the common wisdom that soft bankruptcy encourages long-termism and risk-taking by developing a theory that hinges on two well-known principles: the “soft budget constraint” problem and the impact of renegotiation on ex ante incentives in the presence of moral hazard. In a nutshell, the basic mechanism goes as follows. Under a soft procedure, the implementation of contingent funding contracts is subject to a problem of “soft budget constraint”, for which the lender is tempted to renegotiate the termination clause and let the entrepreneur continue if recovery rates increase. In other words, the lender cannot commit to liquidate the firm if there is a positive benefit to be captured from second period production. This weakens the ability of the contract to solve the moral hazard problem embedded in the first period production and implies that if there are not sufficient rents in the second period it may be optimal for the entrepreneur to select the short-term project. The short-termism result is supported by several pieces of empirical evidence on the effects of the introduction of stronger entrepreneur’s renegotiation power in bankruptcy on the cost of finance (e.g., Scott and Smith, 1986 and Rodano et al., 2012). Moreover, the model is simple and can be easily extended to analyze the robustness of the short-termism result in alternative contracting environments. For example, in my future research I plan to extend the analysis developed in this article in a setting with multiple lenders, so to disentangle to what extent and in which circumstances the ability of a bankruptcy law à-la-Chapter 11 to solve creditors’ mis-coordination (Gertner and Scharfstein, 1991) can offset the inefficiencies arising from agency problem’s exacerbation.