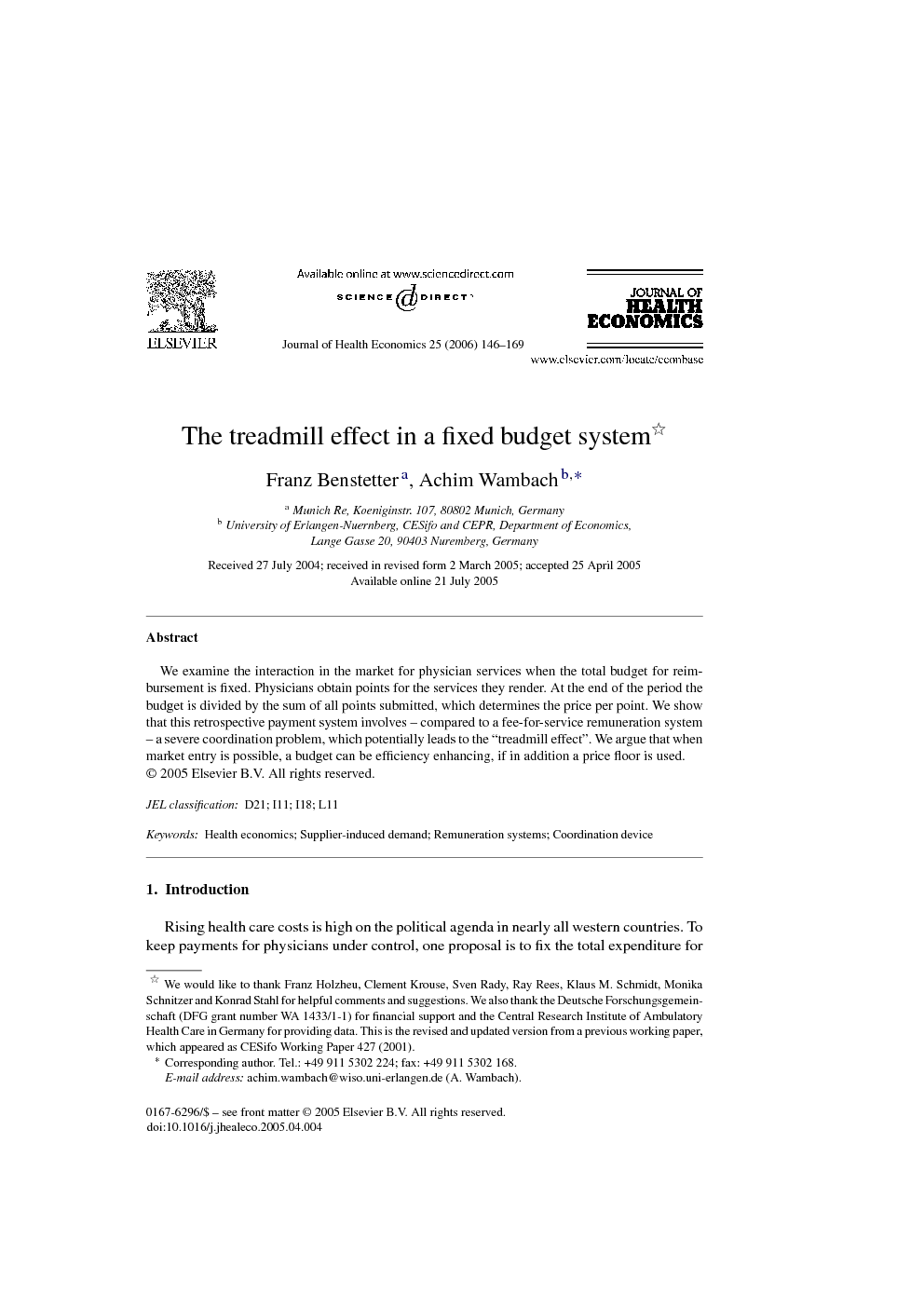 We examine the interaction in the market for physician services when the total budget for reimbursement is fixed. Physicians obtain points for the services they render. At the end of the period the budget is divided by the sum of all points submitted, which determines the price per point. We show that this retrospective payment system involves – compared to a fee-for-service remuneration system – a severe coordination problem, which potentially leads to the “treadmill effect”. We argue that when market entry is possible, a budget can be efficiency enhancing, if in addition a price floor is used.

Rising health care costs is high on the political agenda in nearly all western countries. To keep payments for physicians under control, one proposal is to fix the total expenditure for health care suppliers. Already in 1993 in the German physician market there was a switch from the cost reimbursement system to a remuneration system with a fixed budget to stop rising health care expenditures.1 Looking at the German outpatient market the following interesting observations can be made. Since the 1990s the average income of physicians has decreased substantially. Furthermore, since the introduction of the budget system, the reimbursement per treatment has fallen.2 In this paper we suggest one possible explanation for these observations, and argue how they may be related to each other. For this purpose we investigate the interaction in the market for physician service when the budget is fixed. By analyzing the strategic uncertainty of a single doctor we show that the market for physician service can – due to a coordination problem – be stuck in an equilibrium where physicians have to augment their number of treatments to avoid bankruptcy. As a consequence prices fall. Our analysis suggests that the introduction of a specific mechanism of a price floor into the market for physician services could solve this coordination problem. Our model belongs to the field of research where alternative reimbursement schemes are investigated and compared.3 Many theoretical papers consider physician response to the form of reimbursement rule, generally focusing on fee-for-service versus capitation reimbursement.4 Consequently, many of the empirical papers have examined the effects of exogenous changes in physician remuneration programs.5 However, strategic aspects (in our case induced through a fixed budget) have not been investigated so far.6 We compare the remuneration system of fee-for-service, which we call price system, with the retrospective payment system of a fixed total budget, which we call point-system. In this payment system the individual physician receives a certain number of points per treatment which depends on the kind of service he renders. At the end of each quarter the fixed budget for all physicians is divided by the sum of points submitted by all physicians for reimbursement, which determines the (ex-post) point value. Therefore from the point of view of an individual physician the amount he receives from the reimbursement center does not only depend on the sum of points of his treatments but also on the number of treatments of all other doctors in the market. We investigate how physicians act when they are able to control the number of treatments. Physicians maximize their utility, taking into account both monetary and effort costs. Depending on the price level, the behavior with respect to the effort costs differs. When prices are high, physicians equate marginal revenue with total marginal costs including effort costs whereas when prices are low, they disregard their effort costs and provide just enough treatments to avoid bankruptcy. In contrast to this price system we find that in the budget system there exists a coordination problem. Depending on the size of the budget, the possible equilibria have one of three different structures. If the budget is very high, there exists a unique equilibrium in pure strategies where the individual physician behaves as a profit maximizer. If the budget is very low, in equilibrium a proportion of physicians exits the market and the others work very hard to avoid bankruptcy. In the scenario with an intermediate budget there exist the two equilibrium outcomes as described above and one additional equilibrium with an intermediate point value, where all physicians work hard,7 but there is no market exit. We argue that this last equilibrium is unstable. The situation under a fixed budget differs from a Prisoners’ Dilemma, where physicians would increase their number of services independent of what the other physicians do. In fact, physicians only expand their treatments if they expect that the others will do so as well and they will refrain from doing so if the others provide a small number of treatments. However, physicians do not seem to coordinate themselves on the equilibrium with a small number of treatments and thus with high point values. In principle, there exist two possible coordination devices. First, the physicians are guaranteed that the budget will be augmented if the point-value drops by more than a predetermined percentage. This point value guarantee will not be used in equilibrium and the budget target will be met. Second, alternatively a maximal number of treatments per physician can be implemented into the budget. However, this second coordination device involves high information and administration effort. In the paper we also analyze the equilibrium when entry into the market is possible. Physicians will enter the market only if the budget is large enough and if their utility by entering the market exceeds their outside option. In this case we show that a fixed budget can lead to a desired allocation of human capital. The paper is organized as follows. In Section 2 we describe the German outpatient medical care system. In Section 3 a model of physician services with fixed prices where physicians can induce demand is presented. In Section 4 we introduce the fixed budget phenomenon into our framework and compare the two different approaches of reimbursement. We study how interaction of physicians leads to a coordination problem. In Section 5 we discuss ways how to solve the coordination problem. Then, in Section 6 market entry of physicians is analyzed. Finally, Section 7 concludes.

We have presented a model of demand inducing physicians which has the property that if prices are high, physicians behave like profit maximizers, while for low prices they behave like satisficers, inducing demand to reach a target income. This target income is given by the monetary costs of the practice. With this model a reimbursement system where the budget is fixed is investigated. Due to a coordination problem physicians may end up in an equilibrium where they have to endure the treadmill effect. The point value falls, the number of treatments increases, and some physicians are forced to exit the market. These predictions are in agreement with some stylized facts presented for the German physicians market. However, if physicians succeed to avoid the coordination problem, then a fixed budget has the positive effect that it leads to desired market entry. A possible coordination device could be to add to a fixed budget a point value guarantee, which in equilibrium will not be used. In our model this coordination device leads to the same result as implementing a maximal number of treatments into the budget system. However, a lower bound on the point-value will establish sufficient health service in case of health shocks and will be much easier to administer. When implementing this measure, however, the government needs to assure to the physician community that it will not cut the budget in future years.