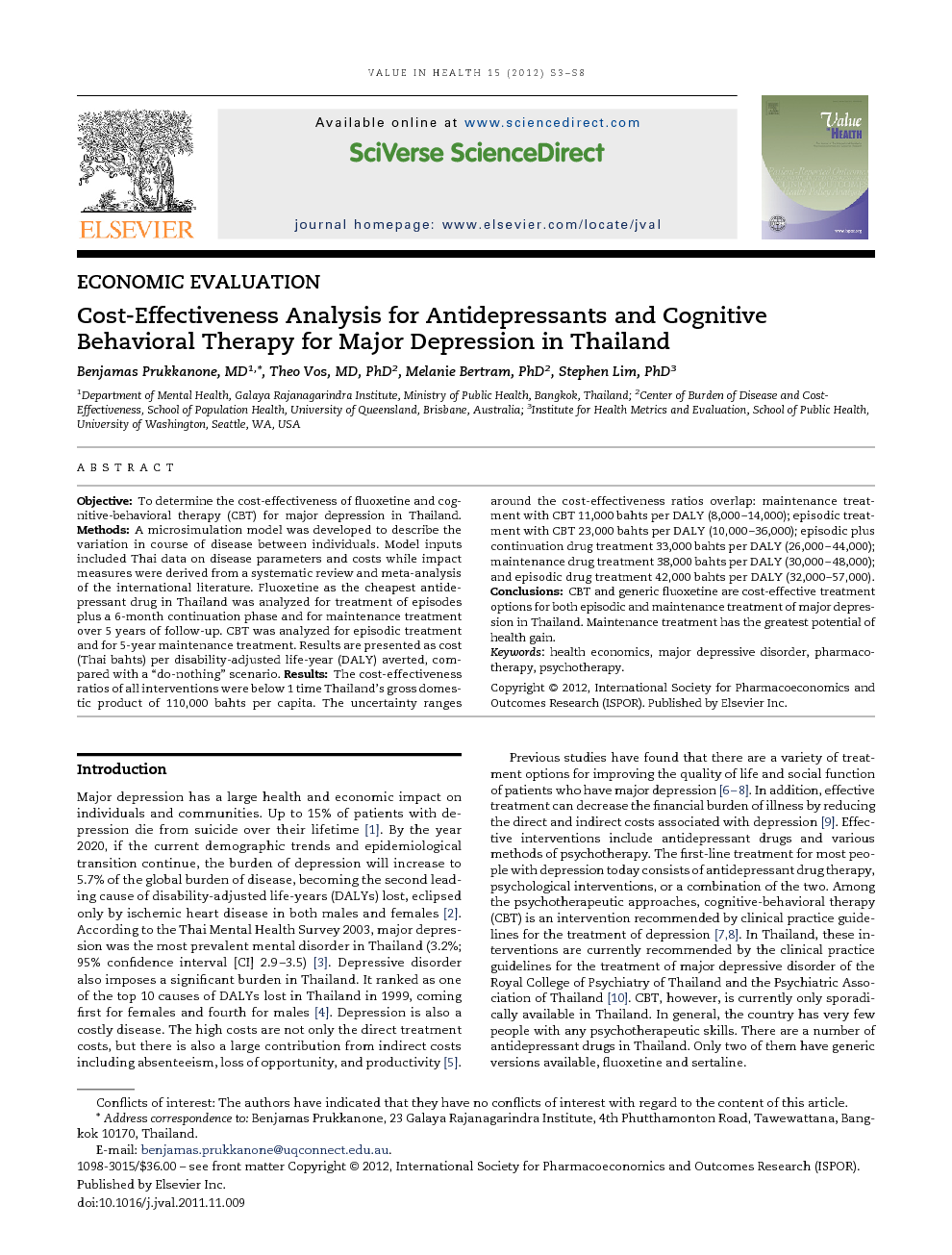 Major depression has a large health and economic impact on individuals and communities. Up to 15% of patients with depression die from suicide over their lifetime [1]. By the year 2020, if the current demographic trends and epidemiological transition continue, the burden of depression will increase to 5.7% of the global burden of disease, becoming the second leading cause of disability-adjusted life-years (DALYs) lost, eclipsed only by ischemic heart disease in both males and females [2]. According to the Thai Mental Health Survey 2003, major depression was the most prevalent mental disorder in Thailand (3.2%; 95% confidence interval [CI] 2.9–3.5) [3]. Depressive disorder also imposes a significant burden in Thailand. It ranked as one of the top 10 causes of DALYs lost in Thailand in 1999, coming first for females and fourth for males [4]. Depression is also a costly disease. The high costs are not only the direct treatment costs, but there is also a large contribution from indirect costs including absenteeism, loss of opportunity, and productivity [5]. Previous studies have found that there are a variety of treatment options for improving the quality of life and social function of patients who have major depression [6], [7] and [8]. In addition, effective treatment can decrease the financial burden of illness by reducing the direct and indirect costs associated with depression [9]. Effective interventions include antidepressant drugs and various methods of psychotherapy. The first-line treatment for most people with depression today consists of antidepressant drug therapy, psychological interventions, or a combination of the two. Among the psychotherapeutic approaches, cognitive-behavioral therapy (CBT) is an intervention recommended by clinical practice guidelines for the treatment of depression [7] and [8]. In Thailand, these interventions are currently recommended by the clinical practice guidelines for the treatment of major depressive disorder of the Royal College of Psychiatry of Thailand and the Psychiatric Association of Thailand [10]. CBT, however, is currently only sporadically available in Thailand. In general, the country has very few people with any psychotherapeutic skills. There are a number of antidepressant drugs in Thailand. Only two of them have generic versions available, fluoxetine and sertaline. Despite there being a range of options for treating patients with depressive disorders, even in high-income countries only one-third of patients receive effective treatments [11] and [12]. Even recently, the health insurance schemes that covered all Thai people—6 million (9%) covered by the Civil Servant Medical Benefit Scheme, 10 million (16%) covered by the Social Health Insurance scheme, and the rest of the population (47 million) covered by the Universal Coverage scheme [13]—estimated that only 4% of psychiatric patients received treatment [14]. In Thailand, resources currently allocated to meet the needs of patients with mental disorder are scarce [15]. Given finite resources in mental health personnel and budget, economic evaluation can help to determine the most cost-effective interventions among numerous intervention options available. Such evidence can help policy decision makers set priorities in terms of budget allocation [16]. Two articles have reviewed the effectiveness of CBT by newly trained Thai CBT therapists in Thai depressive patients [17] and [18]. Both were outcomes of a project to train mental health professionals in the treatment of major depression by CBT. In the first phase, 10 experienced mental health professionals were trained in a 5-day workshop by a qualified trainer from the United Kingdom. All trainees received at least eight sessions of supervision from two qualified Thai therapists. During the training, a Thai manual of CBT for depression was developed. In the last phase of the project, a 16-week, open-label study of the efficacy and acceptability of CBT in patients with major depression not responding to 4-weeks of treatment with fluoxetine was carried out. The first study [18] reported outcomes in 15 patients treated by four newly trained therapists. Overall, the treatment program seemed effective in alleviating depression (13 of the 15 patients improved significantly), and patient satisfaction with treatment was high. Fifty-seven percent of patients, however, stopped treatment before week 12; only one completed all the 16 sessions. The authors concluded that CBT efficacy as evident in Western studies can be generalized to the Thai context. Nevertheless, the high discontinuation rate suggests that patients may prefer a shorter duration of treatment. The other study [17] reported that all 10 patients, of three newly trained therapists from this same CBT training program, responded by week 12 and 70% of them were in remission by week 12. Neither study had a control group and therefore provide insufficient evidence of effectiveness. There is only one cost-effectiveness study of drug treatment of major depressive disorder in Thailand. It concluded that escitalopram was more cost-effective than fluoxetine and venlafaxine, but it did not consider the availability of a cheap generic version of fluoxetine [19]. There are no economic evaluations of psychotherapy in Thailand. Our study aims to inform policymakers of the most cost-effective intervention for major depression in Thailand.

The average cost-effectiveness ratios of all interventions were below 1 time the GDP of 110,000 bahts per capita in Thailand, a level recommended as a cutoff for “very cost effective” interventions [59]. CBT and generic fluoxetine are cost-effective treatment options for both episodic and maintenance treatment of major depression in Thailand. Maintenance treatment has the greatest potential of health gain. As the large majority of depressive patients have multiple episodes over their lifetime, there are strong recommendations to treat major depressive disorder as a chronic episodic disease [8] and [28]. Hence, most people with major depression should receive longer-term medication treatment or psychotherapy during what are called “continuation” or “maintenance” periods to prevent relapse and recurrence of the disorder. CBT is currently only sporadically available in Thailand. CBT is not part of psychology or psychiatry training programs. There also is a lack of mental health personnel, especially psychiatrists and psychologists, who would be expected to deliver CBT in Thailand. It may be more feasible and would be less costly to train psychiatric nurses as CBT therapists rather than psychiatrists or psychologists. Strengths of this analysis include using the microsimulation model that can represent the natural history of depressive disorder as a chronic episodic disease. It allowed us to track all patients as individuals taking into account the wide variation in the length and frequency of episodes. The efficacy data of antidepressants are from a meta-analysis that took into account unpublished data from pharmaceutical companies reported to the Food and Drug Administration, avoiding the publication bias that affects meta-analyses of published trials. The majority of published studies were conducted by pharmaceutical companies with a vested interest. The main limitation of this study was the measurement of the health benefit for each of the treatment options. There is no information on the benefit of these interventions for major depression in Thailand. We therefore relied on data from international meta-analyses. The ES of interventions from clinical trials may not directly translate into effectiveness. The generalizability of the effectiveness measures, particularly for CBT, has not been established. Psychological interventions under routine health-care circumstances in Thailand may work differently from how they work in different countries because of differences in health services, culture, lifestyles, and beliefs [60].The cost of CBT did not take into consideration starting-up costs, and so this can lead to an underestimation of the implementation costs in our study. If Thailand would chose to implement CBT as a treatment option for patients with major depression it would need to consider the cost of health personnel training and the cultural factors that may influence its effectiveness. We recommend future research on the efficacy and applicability of CBT or other psychosocial interventions in the Thai context. The results of this cost-effectiveness analysis indicate that CBT could be a cost-effective treatment option in Thailand and that it potentially can be more effective than drug treatment of major depression, albeit under a series of assumptions regarding its efficacy in Thailand.