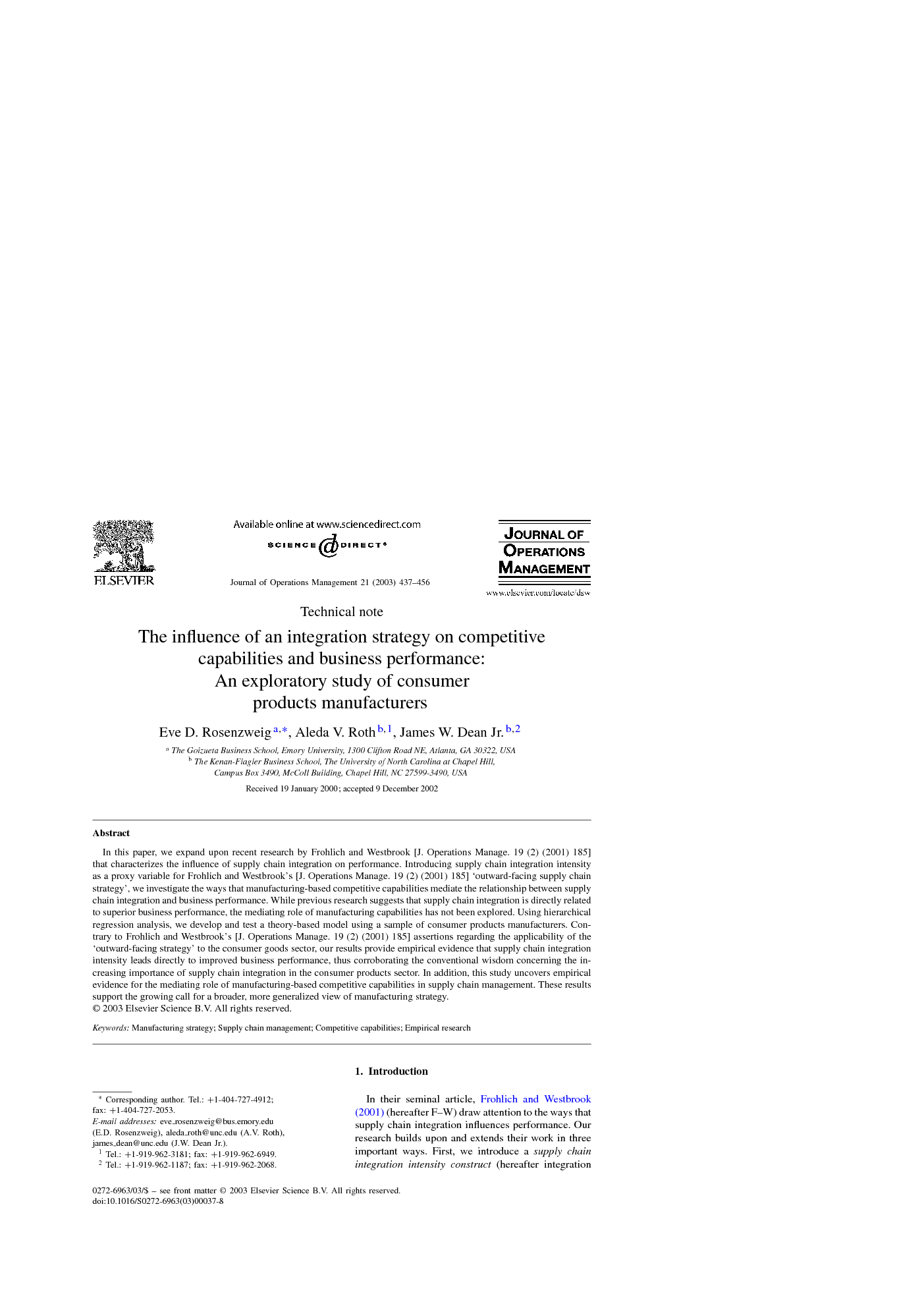 5.1. Theoretical conclusions The need for tighter coupling with supply chain partners for building competitive capabilities—to drive either efficiency or market responsiveness—has been identified in previous research (Childerhouse et al., 2002, Choi and Hartley, 1996, Fisher, 1997, Handfield and Nichols, 1999 and Heikkila, 2002). This study theoretically and empirically establishes the ways that supply chain integration leads to increases in competitive capabilities and improved business performance, providing evidence previously lacking in the literature. Contrary to F–W’s assertions, our empirical findings suggest that consumer products manufacturers also achieve performance benefits from supply chain integration efforts. Results show that consumer products manufacturers with high integration intensity achieve superior product quality, delivery reliability, process flexibility, and cost leadership. When embedded within the organization’s operating processes, these capabilities are inherently difficult to imitate, thus providing a competitive advantage over less highly integrated firms in the industry (Grant, 1996 and Hayes and Upton, 1998). In turn, these enhanced competitive capabilities generally improve business performance. Within our sample of consumer products manufacturers, the delivery reliability and cost leadership capabilities serve as the predominant links between integration intensity and business performance. Taken together, these findings indicate that the positive effects of supply chain integration on performance are farther-reaching than previously believed. Consistent with the literature, our findings also indicate a direct, positive relationship between integration intensity and two financial measures, namely, the MBU’s performance relative to goals on ROA and the percentage of revenues derived from new products. Since the former measure is a lagging and the latter is a leading indicator of financial performance, it is reasonable to conclude that supply chain integrators in hypercompetitive environments such as the consumer products sector can achieve a financially based competitive advantage through reduced transaction costs (D’Aveni, 1994 and Williams et al., 2002). Thus, high integration intensity not only builds capabilities, but also reduces the net costs of conducting business by interlocking supply chain elements, essentially providing manufacturers with more leverage in the increasingly volatile marketplace. Unlike past research, we found no empirical evidence to support a direct effect between integration intensity and sales growth, nor between integration intensity and customer satisfaction. Rather, it appears that the benefits of integration must first be translated into operational capabilities valued by customers, such as product quality, delivery reliability, process flexibility or cost leadership. 5.2. Managerial implications These results indicate that supply chain integration choices are an important addition to the traditional manufacturing strategy content set of structural and infrastructural choices (Clark, 1996, Fine, 1998, Frohlich and Westbrook, 2001, Giffi et al., 1990, Hayes, 2002 and Wheelwright and Bowen, 1996). Close cross-functional coordination is a strategic imperative as manufacturers engage in greater coordination among their factory networks, including enterprise software implementations like SAP, production planning and scheduling, customer order management, and demand planning (Stratman and Roth, 2002). In fact, internal integration is becoming increasingly important as technological advancements create new opportunities for new product development and other process improvements (Hayes, 2002, Parker and Anderson, 2002, Roth, 1996 and Williams et al., 2002). Likewise, external integration efforts can be advanced by utilizing Internet technologies to enable new ways of coordinating the development and exchange of goods and services between businesses for competitive advantage (Frohlich and Westbrook, 2002 and Rosenzweig and Roth, 2003). Without this strategic perspective of supply chain integration, supply chain partners will experience differences in objectives and performance metrics, disagreements on items such as inventory ownership, and a general unwillingness to collaborate (Lee and Billington, 1992 and Parker and Anderson, 2002). Hence, manufacturing managers must become more adept at managing both internal and external supply chain relationships and must make deliberate investments in resources that build integrative competencies (Clark, 1996, Giffi et al., 1990, Hayes, 2002 and Parker and Anderson, 2002). 5.3. Study limitations No research project is without its limitations. One limitation of this single-sector study is that its conclusions may not be generalizable to other sectors (Cool and Schendel, 1987 and Safizadeh et al., 2000). Future studies replicating this research across multiple industries and sectors would increase our understanding of the effect of supply chain integration on competitive capabilities and business performance. A second limitation is that market leaders dominate our cross-sectional sample. Results might differ for those consumer product manufacturers serving a small niche or modest share of the market, which is also a subject for future research. The limitation of our sample dominated by market leaders potentially reduces the amount of variance in the data, which may have weakened some of the empirical findings. Third, the use of cross-sectional data may limit the discussion of causality, which requires longitudinal research. Nonetheless, our results generally support the directions of the associations found in previous literature. The observed empirical relationships between competitive capabilities and business performance, for example, corroborate findings of prior operations management researchers using different samples (see, e.g. Vickery et al., 1997 and White, 1996). A fourth limitation deals with the operationalization of the delivery reliability and cost leadership constructs. Narasimhan and Jayaram (1998) note that because of data limitations, the use of existing databases sometimes affects the operationalization of constructs. Item availability in the 1997 VIM database required us to operationalize these two constructs using only two items each, which is below the suggested lower bound of three items per construct (see, e.g. Hensley, 1999). Fifth, the theoretical importance of supply chain integration and our empirical findings indicate the need for further scale development on integration intensity. Along these lines, although this study provides empirical evidence that supply chain integration matters in manufacturing strategy, it does not explain how manufacturers systematically acquire high levels of internal and external integration. Future research on the ways that the portfolio of manufacturing tactics and technology strategies builds integration intensity and the ways that integration intensity in turn improves the relative effectiveness of manufacturing strategy implementation would provide a welcome contribution to the literature stream.