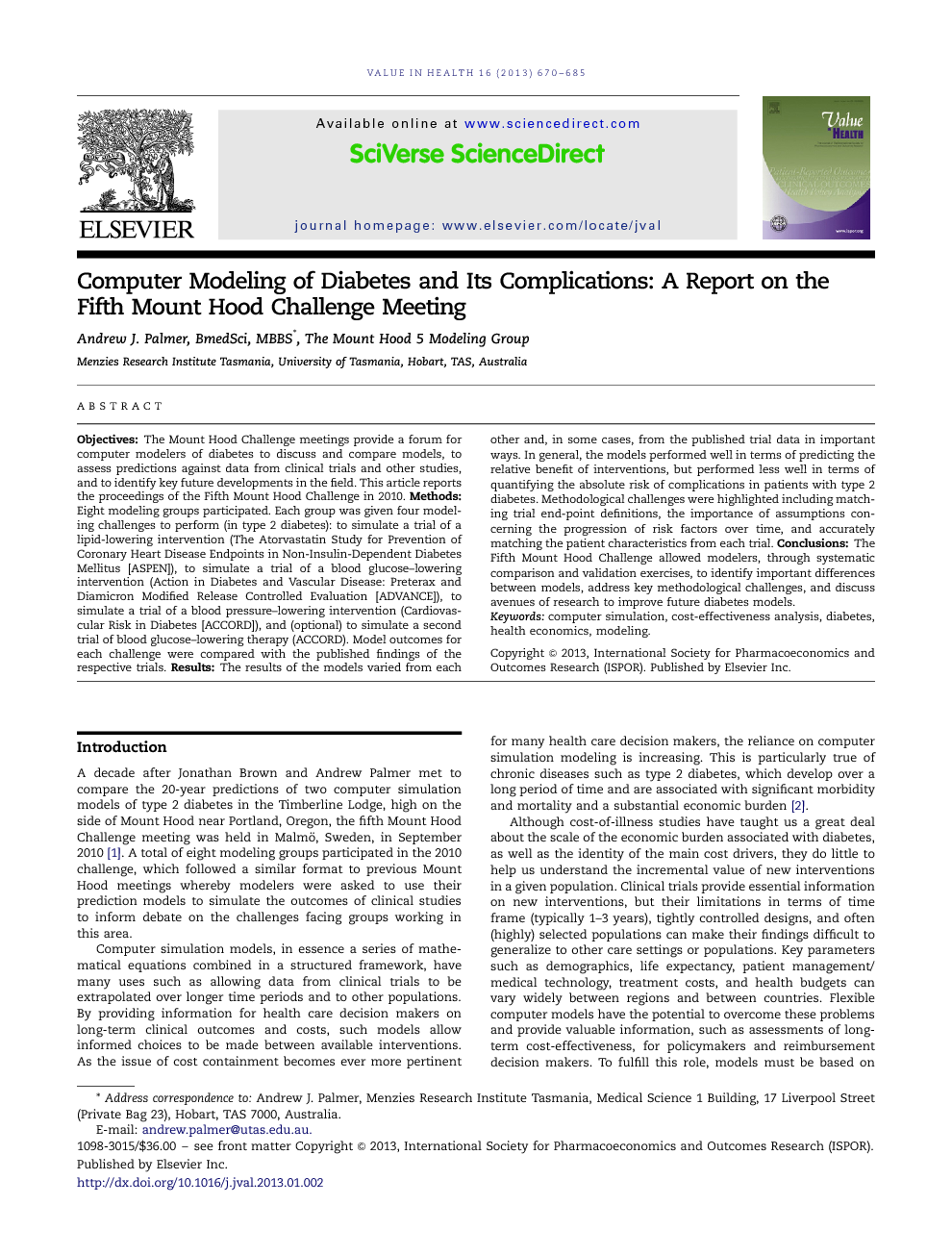 Objectives The Mount Hood Challenge meetings provide a forum for computer modelers of diabetes to discuss and compare models, to assess predictions against data from clinical trials and other studies, and to identify key future developments in the field. This article reports the proceedings of the Fifth Mount Hood Challenge in 2010. Methods Eight modeling groups participated. Each group was given four modeling challenges to perform (in type 2 diabetes): to simulate a trial of a lipid-lowering intervention (The Atorvastatin Study for Prevention of Coronary Heart Disease Endpoints in Non-Insulin-Dependent Diabetes Mellitus [ASPEN]), to simulate a trial of a blood glucose–lowering intervention (Action in Diabetes and Vascular Disease: Preterax and Diamicron Modified Release Controlled Evaluation [ADVANCE]), to simulate a trial of a blood pressure–lowering intervention (Cardiovascular Risk in Diabetes [ACCORD]), and (optional) to simulate a second trial of blood glucose–lowering therapy (ACCORD). Model outcomes for each challenge were compared with the published findings of the respective trials. Results The results of the models varied from each other and, in some cases, from the published trial data in important ways. In general, the models performed well in terms of predicting the relative benefit of interventions, but performed less well in terms of quantifying the absolute risk of complications in patients with type 2 diabetes. Methodological challenges were highlighted including matching trial end-point definitions, the importance of assumptions concerning the progression of risk factors over time, and accurately matching the patient characteristics from each trial. Conclusions The Fifth Mount Hood Challenge allowed modelers, through systematic comparison and validation exercises, to identify important differences between models, address key methodological challenges, and discuss avenues of research to improve future diabetes models.

A decade after Jonathan Brown and Andrew Palmer met to compare the 20-year predictions of two computer simulation models of type 2 diabetes in the Timberline Lodge, high on the side of Mount Hood near Portland, Oregon, the fifth Mount Hood Challenge meeting was held in Malmö, Sweden, in September 2010 [1]. A total of eight modeling groups participated in the 2010 challenge, which followed a similar format to previous Mount Hood meetings whereby modelers were asked to use their prediction models to simulate the outcomes of clinical studies to inform debate on the challenges facing groups working in this area. Computer simulation models, in essence a series of mathematical equations combined in a structured framework, have many uses such as allowing data from clinical trials to be extrapolated over longer time periods and to other populations. By providing information for health care decision makers on long-term clinical outcomes and costs, such models allow informed choices to be made between available interventions. As the issue of cost containment becomes ever more pertinent for many health care decision makers, the reliance on computer simulation modeling is increasing. This is particularly true of chronic diseases such as type 2 diabetes, which develop over a long period of time and are associated with significant morbidity and mortality and a substantial economic burden [2]. Although cost-of-illness studies have taught us a great deal about the scale of the economic burden associated with diabetes, as well as the identity of the main cost drivers, they do little to help us understand the incremental value of new interventions in a given population. Clinical trials provide essential information on new interventions, but their limitations in terms of time frame (typically 1–3 years), tightly controlled designs, and often (highly) selected populations can make their findings difficult to generalize to other care settings or populations. Key parameters such as demographics, life expectancy, patient management/medical technology, treatment costs, and health budgets can vary widely between regions and between countries. Flexible computer models have the potential to overcome these problems and provide valuable information, such as assessments of long-term cost-effectiveness, for policymakers and reimbursement decision makers. To fulfill this role, models must be based on the best available evidence, and validated against clinical data (internal and external validation) as well as each other, and they must also be transparent, documented in detail, and open about their mechanisms and assumptions. The aim of this article was to report the proceedings of the Fifth Mount Hood Challenge held in Malmö, Sweden, in 2010, with a view to providing a summary of how eight current diabetes models match up to data from published clinical studies as well as to each other, to highlight differences between models, and to offer an insight into the challenges facing diabetes models a decade after the First Mount Hood Challenge.