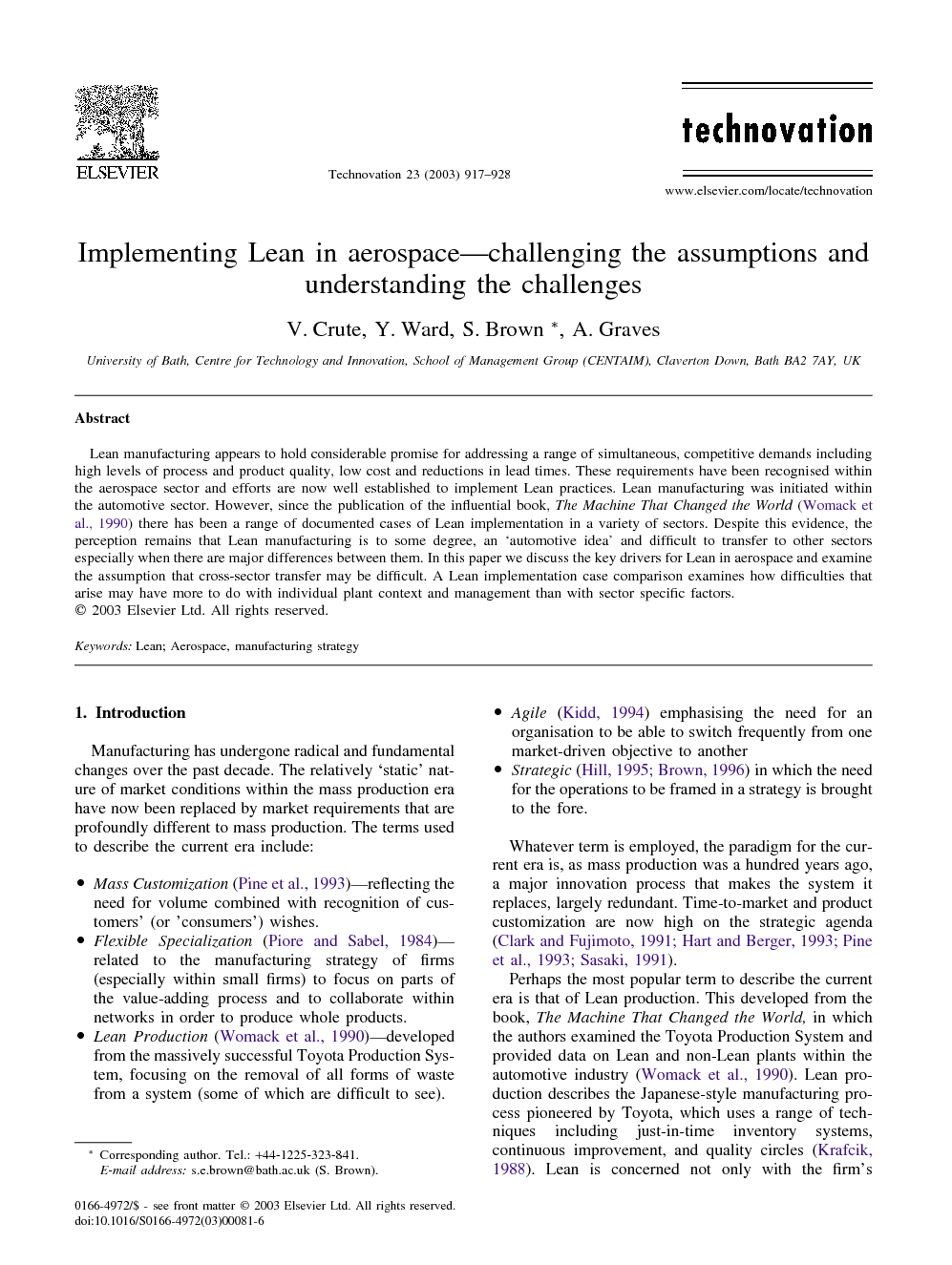 Lean manufacturing appears to hold considerable promise for addressing a range of simultaneous, competitive demands including high levels of process and product quality, low cost and reductions in lead times. These requirements have been recognised within the aerospace sector and efforts are now well established to implement Lean practices. Lean manufacturing was initiated within the automotive sector. However, since the publication of the influential book, The Machine That Changed the World (Womack et al., 1990) there has been a range of documented cases of Lean implementation in a variety of sectors. Despite this evidence, the perception remains that Lean manufacturing is to some degree, an ‘automotive idea’ and difficult to transfer to other sectors especially when there are major differences between them. In this paper we discuss the key drivers for Lean in aerospace and examine the assumption that cross-sector transfer may be difficult. A Lean implementation case comparison examines how difficulties that arise may have more to do with individual plant context and management than with sector specific factors.

From our research it would appear that the problems of implementing Lean within aerospace are not, necessarily, more difficult than that of implementing Lean within high volume sectors, including automobiles. The challenges are different but not more difficult. We offer key conclusions from our findings and tentative lessons for other companies can be drawn from the experience of the two sites. First, Lean capabilities are not merely firm-specific but are, instead, plant specific. There were differences in the rate of progress made and differences in the approach taken to Lean implementation. Second, it cannot be assumed that the characteristics of the ‘best performing’ site within a firm that has multiple plants will, necessarily, be transferred to other plants within the same company. Techniques, including benchmarking between sites may help but there needs to be ‘Lean Champions’ between sites if Lean practices are to be disseminated among plants within the same firm. Third, in order for Lean to be implemented, plant-specific manufacturing strategies have to be in place that are comprehensive and holistic in scope and content. Results may also be achieved more readily when improvement activities focus on all or a large part of an identified ‘product value stream’ rather than on a functional area which produces a range of products. Similarly, faster results seem to be possible when process ownership has been established rather than several products sharing production processes. Plant-specific strategies have to include internal targets as well as the development of supplier relationships with external partners. The strategic approach taken to Lean implementation would seem to have a significant impact on the rate of performance improvement (Crute and Graves, 2001). Within the case studies presented, a targeted and holistic approach to Lean implementation delivered faster results in Lean implementation. This approach involves creating a ‘Lean system’ rather than simply applying single Lean techniques. Complementary objectives are set which support the elimination of waste and flow of value to the customer. Such objectives include identifying and eliminating non-value adding activities from your processes; reducing lead times; inventory reduction and establishing ‘pull’ systems. Clear targets and performance measures would also seem to play a critical role in Lean implementation. Fourth, operations managers have to be willing to take on a more strategic role than has been the case in past manufacturing paradigms. This is a difficult issue because the emergence of Lean Production has emerged from the profound changes of manufacturing processes over time. However, as Brown (2000) found, the transition from craft through mass production to the current era of Lean often resulted in operations management being absent from the most senior levels of the firm as enterprises became larger and more organized around functions and although there has been increasing importance placed on operations personnel in terms of their contribution to the firm’s capabilities, including Lean production (Womack et al., 1990 and Kenney and Florida, 1993) this has not included discussion about their involvement in terms of their position at strategic levels within the hierarchy of the firm. Our findings indicate the need for operations managers to have a strategic and not merely tactical role if Lean implementation is to be successful. Senior management have an important role to play in presenting a coherent vision for their business, clearly communicating business strategy and indicating how the Lean philosophy and practices fit with the needs of the business. There also needs to be an awareness of the impact of the consistency of senior management messages. Questions need to be asked concerning whether the philosophies and initiatives being promoted are consistent, timely and necessary. Fifth, our findings indicate that it is possible that Lean implementation can be achieved more rapidly in plants where the culture supports autonomous working and learning through experimentation. Where such a culture does not exist, senior managers will play a key role in creating a context where change is possible. This requires leadership and a consistent message of support. As one interviewee at Site A stated, ‘you need to believe in people and let them try. If they mess it up, support them, and if they mess it up again—support them again’. Sixth, some aspects of improving performance such as changing factory layout require time and physical space to be available, if significant results are to be achieved. Interviewees at the improvement sites suggested that consideration should be given to creating a temporary ‘buffer’ of time through use of evenings or weekends, through committing extra resources to the area or through temporarily increasing stock to ‘make space’ for improvement activities without affecting production demands. Finally, we recognise that a basic definition of any case study is that it is ‘the intensive examination of a single instance of a phenomenon’ (Kervin, 1992, p. 53). By their very nature, case studies may be seen as having limitations is the ‘transferability’ of the findings to other settings. However, we hope that our research will encourage further exploration of the transfer of Lean practices within the aerospace sector including a larger range of case studies as well as multiple sites within the same company.