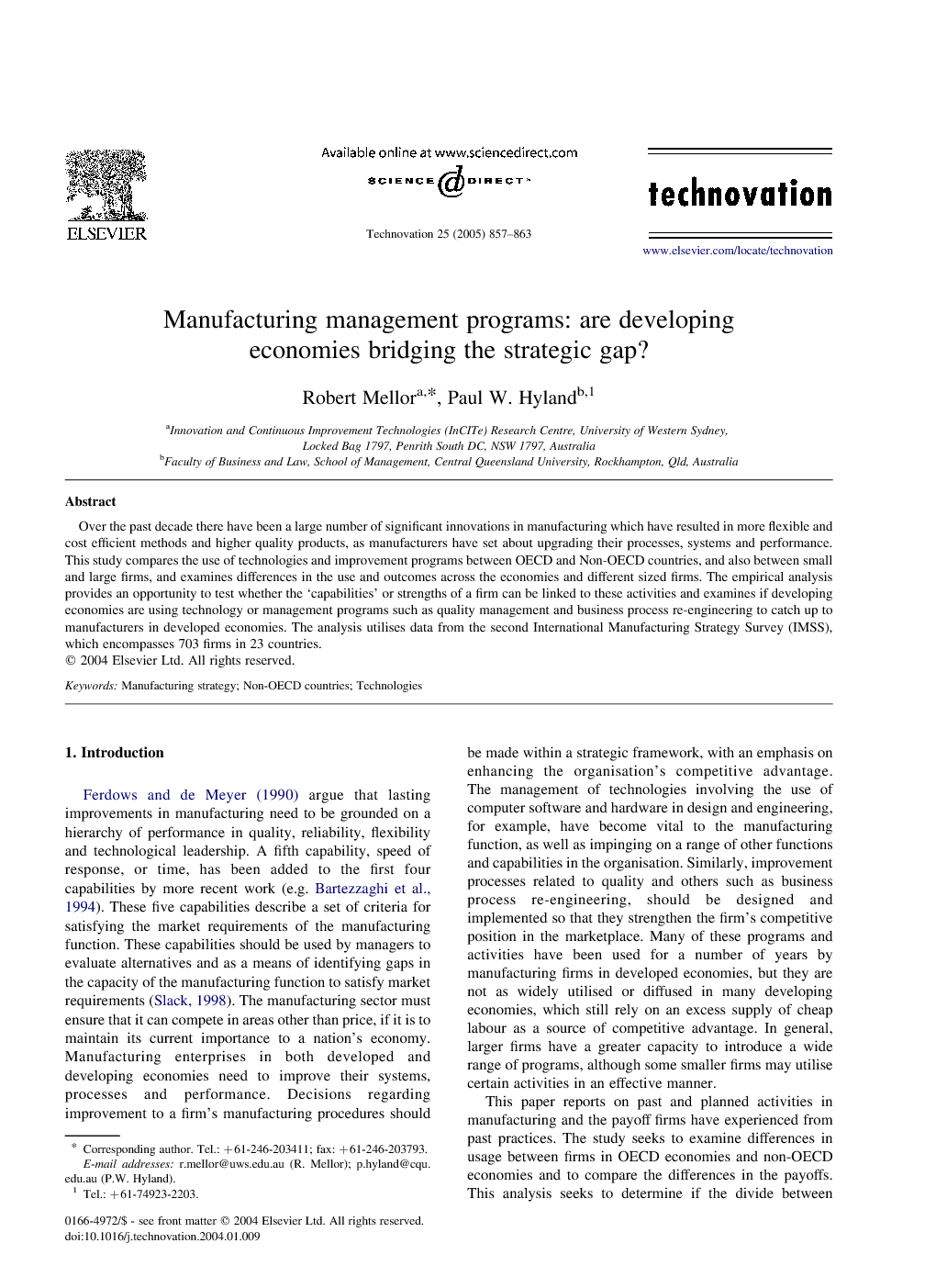 Over the past decade there have been a large number of significant innovations in manufacturing which have resulted in more flexible and cost efficient methods and higher quality products, as manufacturers have set about upgrading their processes, systems and performance. This study compares the use of technologies and improvement programs between OECD and Non-OECD countries, and also between small and large firms, and examines differences in the use and outcomes across the economies and different sized firms. The empirical analysis provides an opportunity to test whether the ‘capabilities’ or strengths of a firm can be linked to these activities and examines if developing economies are using technology or management programs such as quality management and business process re-engineering to catch up to manufacturers in developed economies. The analysis utilises data from the second International Manufacturing Strategy Survey (IMSS), which encompasses 703 firms in 23 countries.

Ferdows and de Meyer (1990) argue that lasting improvements in manufacturing need to be grounded on a hierarchy of performance in quality, reliability, flexibility and technological leadership. A fifth capability, speed of response, or time, has been added to the first four capabilities by more recent work (e.g. Bartezzaghi et al., 1994). These five capabilities describe a set of criteria for satisfying the market requirements of the manufacturing function. These capabilities should be used by managers to evaluate alternatives and as a means of identifying gaps in the capacity of the manufacturing function to satisfy market requirements (Slack, 1998). The manufacturing sector must ensure that it can compete in areas other than price, if it is to maintain its current importance to a nation's economy. Manufacturing enterprises in both developed and developing economies need to improve their systems, processes and performance. Decisions regarding improvement to a firm's manufacturing procedures should be made within a strategic framework, with an emphasis on enhancing the organisation's competitive advantage. The management of technologies involving the use of computer software and hardware in design and engineering, for example, have become vital to the manufacturing function, as well as impinging on a range of other functions and capabilities in the organisation. Similarly, improvement processes related to quality and others such as business process re-engineering, should be designed and implemented so that they strengthen the firm's competitive position in the marketplace. Many of these programs and activities have been used for a number of years by manufacturing firms in developed economies, but they are not as widely utilised or diffused in many developing economies, which still rely on an excess supply of cheap labour as a source of competitive advantage. In general, larger firms have a greater capacity to introduce a wide range of programs, although some smaller firms may utilise certain activities in an effective manner. This paper reports on past and planned activities in manufacturing and the payoff firms have experienced from past practices. The study seeks to examine differences in usage between firms in OECD economies and non-OECD economies and to compare the differences in the payoffs. This analysis seeks to determine if the divide between operations in developing and developed economies is reducing or if it is the case that operations in developed economies are still achieving greater payoffs than operations in developing regions such as South East Asia and Latin America. Consideration is also given to whether any of these differences are related to differences in firm size in OECD and non-OECD economies.