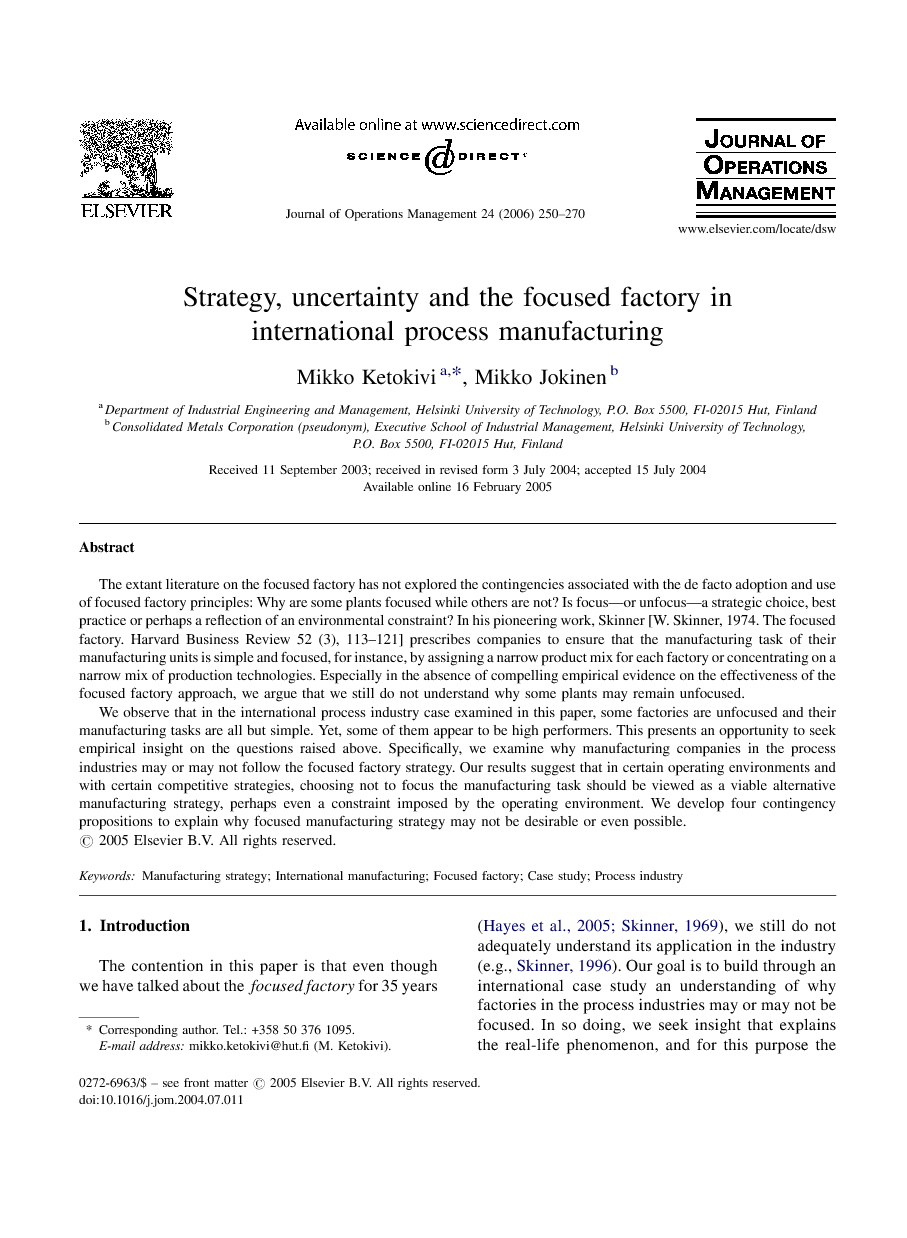 The extant literature on the focused factory has not explored the contingencies associated with the de facto adoption and use of focused factory principles: Why are some plants focused while others are not? Is focus—or unfocus—a strategic choice, best practice or perhaps a reflection of an environmental constraint? In his pioneering work, Skinner [W. Skinner, 1974. The focused factory. Harvard Business Review 52 (3), 113–121] prescribes companies to ensure that the manufacturing task of their manufacturing units is simple and focused, for instance, by assigning a narrow product mix for each factory or concentrating on a narrow mix of production technologies. Especially in the absence of compelling empirical evidence on the effectiveness of the focused factory approach, we argue that we still do not understand why some plants may remain unfocused. We observe that in the international process industry case examined in this paper, some factories are unfocused and their manufacturing tasks are all but simple. Yet, some of them appear to be high performers. This presents an opportunity to seek empirical insight on the questions raised above. Specifically, we examine why manufacturing companies in the process industries may or may not follow the focused factory strategy. Our results suggest that in certain operating environments and with certain competitive strategies, choosing not to focus the manufacturing task should be viewed as a viable alternative manufacturing strategy, perhaps even a constraint imposed by the operating environment. We develop four contingency propositions to explain why focused manufacturing strategy may not be desirable or even possible.

We have taken the first steps toward a mid-range contingency theory of the focused factory in the context of the process industry by developing a set of four contingency propositions. The main contribution of this emerging theory is that it addresses one of the remaining gaps in the focused factory literature: Why do some plants remain unfocused? We point to strategic and business environmental contingencies, which have been largely neglected in earlier research on focus. Future research should further elaborate on these contingencies. We have also offered four propositions that can be empirically tested in large samples. This is another potential direction for future research. This paper has contributed to the manufacturing strategy literature by taking a systematic in-depth look at the determinants of manufacturing focus in a complex and dynamic business environment. In so doing, this study has complemented the extant research on focus has concentrated largely on the content of focus as well as its performance implications. Earlier contributions, while certainly valuable and at the same time important foundations for this paper, are limited in helping us understand the phenomenon that provided the impetus for this paper. The main propositions arising from our theory is that there is a time and place for product-process focus in the process industries. Or perhaps a better way to express the result is that while focus seems to be associated with higher performance, it is not always the best strategy; there are other viable alternatives. Further, the corporation should not impose a single manufacturing strategy to be executed in all its manufacturing units, because the environmental and strategic contingencies faced by different plants are not identical. We argue that these issues have not received enough attention in the extant literature, and they should further be examined in empirical research. The case company in this study has both very focused as well as unfocused plants; we should not readily assume that staying unfocused is bad strategy. Staying unfocused may indeed be a conscious strategic choice that helps cushion environmental turbulence in times of rapid change, and unfocused strategies may well be more useful in executing specific competitive strategies. We find a great wisdom in the words of Plant B's plant manager: “Our goal is not to make complex issues simple, rather, our goal is to make complexity manageable by building flexibility into our production systems.”