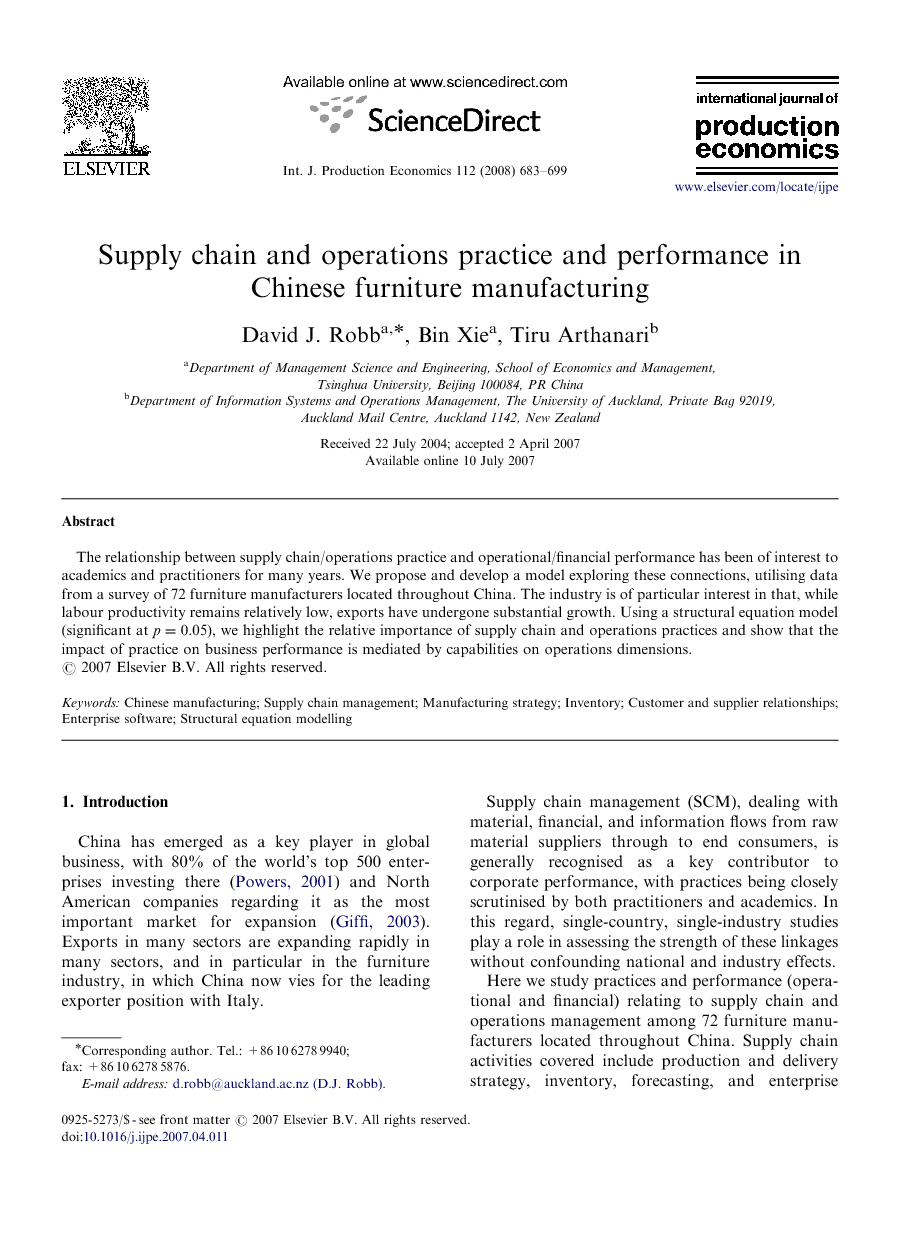 The relationship between supply chain/operations practice and operational/financial performance has been of interest to academics and practitioners for many years. We propose and develop a model exploring these connections, utilising data from a survey of 72 furniture manufacturers located throughout China. The industry is of particular interest in that, while labour productivity remains relatively low, exports have undergone substantial growth. Using a structural equation model (significant at p=0.05), we highlight the relative importance of supply chain and operations practices and show that the impact of practice on business performance is mediated by capabilities on operations dimensions.

China has emerged as a key player in global business, with 80% of the world's top 500 enterprises investing there (Powers, 2001) and North American companies regarding it as the most important market for expansion (Giffi, 2003). Exports in many sectors are expanding rapidly in many sectors, and in particular in the furniture industry, in which China now vies for the leading exporter position with Italy. Supply chain management (SCM), dealing with material, financial, and information flows from raw material suppliers through to end consumers, is generally recognised as a key contributor to corporate performance, with practices being closely scrutinised by both practitioners and academics. In this regard, single-country, single-industry studies play a role in assessing the strength of these linkages without confounding national and industry effects. Here we study practices and performance (operational and financial) relating to supply chain and operations management among 72 furniture manufacturers located throughout China. Supply chain activities covered include production and delivery strategy, inventory, forecasting, and enterprise software, as well as integration aspects related to interaction and communications with customers and suppliers. Operations areas include manufacturing technology and systems variables along with human resources issues. The study was conducted in 2001, immediately prior to World Trade Organization (WTO) accession. We exploit structural equation modelling (SEM) in the analysis. The paper complements and extends an earlier one which considered only manufacturing strategy/technology (i.e., without reference to supply chain practice) and moreover only employed correlation analysis (Robb and Xie, 2003). Section 2 provides a background to SCM and furniture manufacturing in China, as well as highlighting previous findings on practice–performance relationships. Section 3 presents the initial conceptual model along with practice and performance construct and factor development. Section 4 describes the survey administration. Section 5 presents the results—both descriptive and inferential. After describing firm demographics, we provide performance and practice construct results, and then present and discuss the SEM development and results. Section 6 provides a conclusion, including managerial implications.

Growth in the Chinese furniture industry over the past decade, in both domestic sales and exports, has been both rapid and sustained. This paper demonstrates that Chinese firms are actively engaged in many forms of improvement relating to operations and supply chain management. It highlights which priorities, programmes, and initiatives are most closely related to financial and market performance, and confirms several earlier studies concerning the relationship between practice and performance. In terms of operations dimensions there are similarities with a 1990 US study of 65 furniture manufacturers (Vickery et al., 1997). For example, in both markets Delivery reliability and dependability were ranked very highly, and Cost and Quality-related dimensions loaded onto a single factor (Value). However, some differences are apparent in that US firms emphasised Innovation, whereas Chinese firms in general compete on Value (Innovation ranks second), which ranks very highly in both importance and performance and is associated with higher financial performance. The hypotheses that practice (H1) and importance (H2) directly influence market performance were rejected. Instead, a model with the practice–market performance relationship being mediated by operations importance and performance was supported (Hypotheses H3, H4 and H5). Market performance is directly impacted by performance on Value and Innovation, and indirectly impacted through Speed and Flexibility (mediated via Value). The survey reveals that intentions (i.e., importance) on Flexibility and Value are more readily translated into performance on the same dimensions, whereas Innovation and Speed performance are more difficult to secure. One could surmise that Innovation is thus the key to competitive advantage—it is difficult to secure (and thus inimitable), but directly (and indirectly) related to market performance. The development of new products is clearly vital in this industry in which style is becoming more important, and customers are changing furniture more frequently (the average number of products listed by our respondents is 321 (median 67, SD 1253) and ranges from 1 to 10,000). With increasing variety, and the rapidly changing economic conditions (in particular, disposable income), it is not surprising that make-to-order (MTO) production dominates, comprising an average of 64% (median 70%, SD 31.6%) of production. This result contrasts another that MTO production rose from less than 20% in 1999 to 30% in 2004, and raises some doubt over the assertion of US manufacturers that the custom-order market is the “Achilles’ heel” of their Chinese competition” even with 5–6-week shipment times (Tan, 2004). Another key finding is that practices are related to the importance placed on various dimensions—the strongest link being between human resources and innovation (thus training can be seen to be a key to securing competitive advantage). While supply chain practice constructs do not have as strong direct links to operations objectives, they are all indirectly related, and thus can be considered as enabling technologies, i.e., promoting the contribution of other practices including AMT, AMS, and HR. Relationships and communications with customers (e.g., consultations on production schedules and New Product Development) are strongly connected with financial performance (market share and profitability) via Flexibility and Value performance. It appears that such relationships partially compensate for the relatively undeveloped distribution infrastructure, and are likely to be increasingly important in this industry (Pyke et al., 2001; Volpe, 2002; Xie et al., 2003). From our study, we may infer a need for the industry to somehow absorb new product development and introduction without substantially increasing costs. However, we believe that the large gap identified between cost importance and performance will unlikely be reduced by a focus on innovation and/or larger product range without reduction of high inventories and increased use of MTO production. There are strong indicators that value is rapidly improving, viz., lower prices, and substantial increases in labour productivity (17% from 1995 to 2002) related to increases in AMT and AMS, along with growth in foreign-invested and private firms, and the downsizing and restructuring of SOEs (Jiang et al., 2004). There are some limitations of our study, including a relatively small sample size, which required us to utilise the same data to both create the constructs and confirm the scales. Also, while construct reliability values are good, the variance extracted tests (especially the stronger ones) showed relatively poor results. Finally, face validity, while supported by the literature review, our experience in the field, and well-attested scales, could have been evaluated by means of rigorous piloting or involving other experts prior to the study. We envisage future research to confirm our findings. Any longitudinal analysis would need to consider the impact of WTO accession. It would also be useful to consider performance and perspectives of more units in the supply chain, especially wood processors and furniture distributors, which are playing an increasingly significant role in the industry.