عنوان انگلیسی
Framing of information on the use of public finances, regulatory fit of recipients and tax compliance
دانلود فوری مقاله + سفارش ترجمه 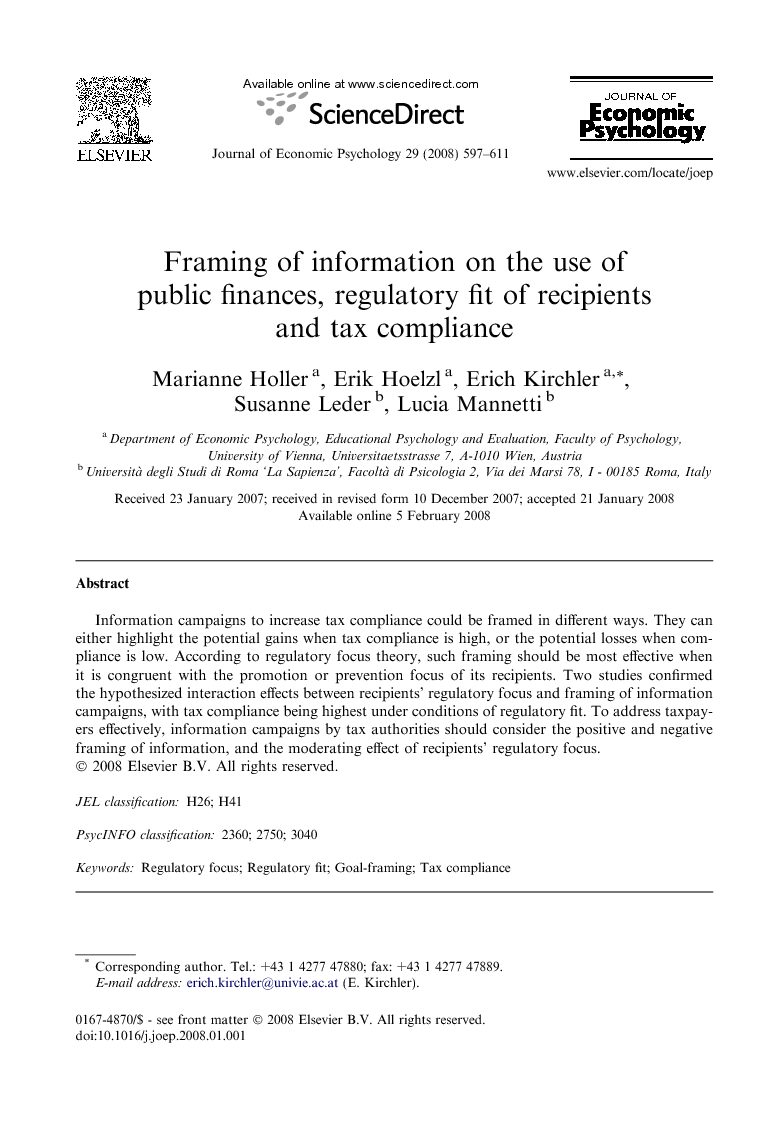 Tax payments represent a social dilemma with colliding individual and collective interests. The financial basis for effective political and economic activities of the government is solid as long as the state succeeds in motivating citizens to cooperate rather than to defect. If a majority of citizens engages in tax avoidance and evasion, provision of public goods and services is at risk (e.g., van Lange, Liebrand, Messick, & Wilke, 1992). Despite temptations to cheat, people in many countries keep up relatively high tax morale and seem to accept their duty to pay taxes (Braithwaite, 2003, James and Alley, 2002 and Kirchler, 2007). Nevertheless, “taxes” have a negative connotation, are associated with an expensive and inefficient management style of politicians and often linked not only to the loss of money but also – especially in the case of self-employment – to restrictions of personal freedom in deciding how to spend and invest one’s “own” money (Kirchler, 1998). Information campaigns on taxes and spending policy of the government as well as the provision of public goods can improve both citizens’ understanding and acceptance of taxes and their compliance. Tax compliance is likely to increase if the tax system is perceived as being transparent, fair, and trustworthy, and when tax knowledge increases (e.g., Kirchler, 2007). This article examines the differential effectiveness of information campaigns. It is assumed that information campaigns that focus on potential gains are more effective when recipients are under promotion focus, and that campaigns that focus on potential losses are more effective when recipients are under prevention focus.

Tax payments can be conceived as contributions to public goods. In public goods studies, willingness to cooperate has been found to depend on various variables, e.g., communication between actors, group identity, payoffs, or identifiability of contributions (Dawes, 1980, Dawes and Messick, 2000 and Kollock, 1998). We suggest that in a tax setting, a relevant factor determining willingness to cooperate is citizens’ knowledge about the use of contributions and the provision of public goods. If the Ministry of Finance effectively communicates the use of tax money for providing public goods, then taxpayers are expected to be more compliant as compared to taxpayers with poor knowledge. Communication about the necessity of paying taxes for governmental investment in public goods can, however, focus on the shortcomings in case of non-compliance or the advantages of compliance. The question is whether pointing at citizens’ losses in case of tax non-compliance is more effective than stressing their gains in case of cooperation. We argue that the effectiveness of positively and negatively framed information about the use of tax payments for public goods and the consequences of tax behaviour depends on the recipient’s regulatory focus. Neither framing can be considered as generally more effective. In two studies, interaction effects between regulatory focus and goal-framing on tax compliance were found. For recipients under promotion focus, information highlighting the potential gains increased tax compliance; for recipients under prevention focus, information highlighting the potential losses increased tax compliance. The effect of regulatory fit held for both dispositional and situational regulatory focus. Results are in line with research in marketing contexts (e.g., Cesario et al., 2004 and Florack and Scarabis, 2006) and health promotion contexts (e.g., Spiegel et al., 2004). The current studies indicate that also for tax contexts, regulatory fit is an important factor to consider when designing information campaigns. Study two has shown that the regulatory fit effect also pertains for situational regulatory focus. As far as radio or TV advertisement is concerned, regulatory focus may be induced either by the context in which the commercials are transmitted or even by a commercial itself. Regulatory focus could be induced through a TV-ad by using images or scenes which activate either promotion or prevention focus. The focus activated by the spot should then be coherent with the goal-framing of the advertising slogan. Further, different radio or TV-programmes could induce either promotion or prevention focus. A game show, for example, may activate a promotion focus, whereas a documentary about the protection of nature may induce a prevention focus. Commercials transmitted during or after specific programmes could be more effective if their message fits the focus induced by the programmes. Considering regulatory fit for tax compliance messages could also contribute to more voluntary tax compliance as opposed to enforced tax compliance. The “slippery slope” framework proposed by Kirchler and colleagues (Kirchler, 2007 and Kirchler et al., in press) suggests that authorities should aim at increasing trust of taxpayers, which in turn would result in voluntary compliance. A message about the use of taxes that is both truthful and framed in the right way to be processed more easily due to its congruence with recipients’ regulatory focus is likely to increase trust, and could reduce the perceived difference between individual and collective interests.