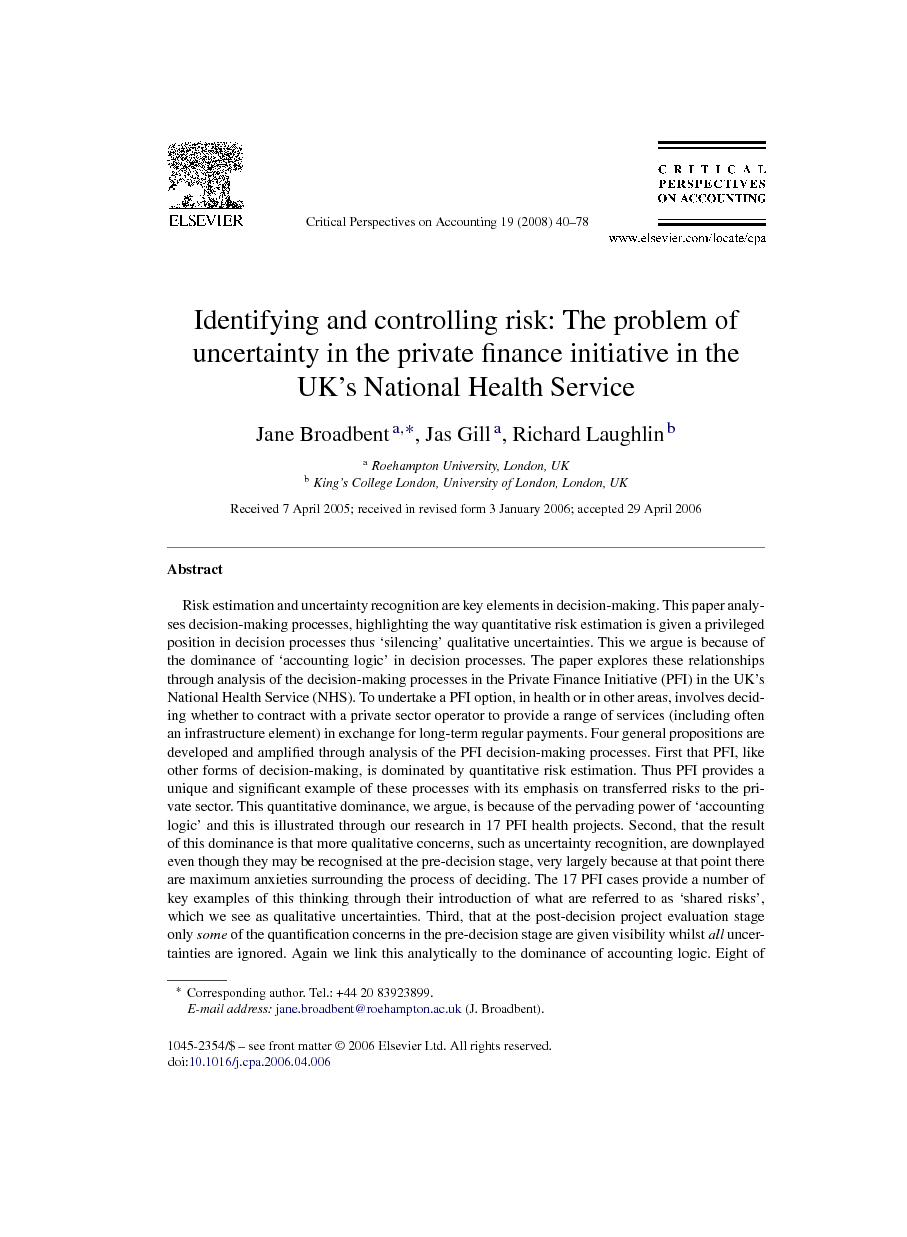 Risk estimation and uncertainty recognition are key elements in decision-making. This paper analyses decision-making processes, highlighting the way quantitative risk estimation is given a privileged position in decision processes thus ‘silencing’ qualitative uncertainties. This we argue is because of the dominance of ‘accounting logic’ in decision processes. The paper explores these relationships through analysis of the decision-making processes in the Private Finance Initiative (PFI) in the UK's National Health Service (NHS). To undertake a PFI option, in health or in other areas, involves deciding whether to contract with a private sector operator to provide a range of services (including often an infrastructure element) in exchange for long-term regular payments. Four general propositions are developed and amplified through analysis of the PFI decision-making processes. First that PFI, like other forms of decision-making, is dominated by quantitative risk estimation. Thus PFI provides a unique and significant example of these processes with its emphasis on transferred risks to the private sector. This quantitative dominance, we argue, is because of the pervading power of ‘accounting logic’ and this is illustrated through our research in 17 PFI health projects. Second, that the result of this dominance is that more qualitative concerns, such as uncertainty recognition, are downplayed even though they may be recognised at the pre-decision stage, very largely because at that point there are maximum anxieties surrounding the process of deciding. The 17 PFI cases provide a number of key examples of this thinking through their introduction of what are referred to as ‘shared risks’, which we see as qualitative uncertainties. Third, that at the post-decision project evaluation stage only some of the quantification concerns in the pre-decision stage are given visibility whilst all uncertainties are ignored. Again we link this analytically to the dominance of accounting logic. Eight of the 17 PFI cases are analysed and provide a powerful illustration of this general characteristic. Their sophisticated measurement of facility management issues ignores all ‘shared risks’ and even some of the quantitative transferred risks. Finally, the paper argues that unless there can be a fundamental reshaping of the mind set and/or the removal of the dominance of accounting logic there will be little hope of allowing equal emphasis of risks and uncertainties in decision-making to occur. In the PFI case there is evidence of a small but growing concern for recognising the importance of uncertainty and non-quantitative analysis. The outworking of this and its combination with quantitative analysis has the potential to provide important leads as to how to bring these important considerations into decision-making more generally. The paper is equivocal as to whether this development will occur very largely because of the resistance of accounting logic to change.