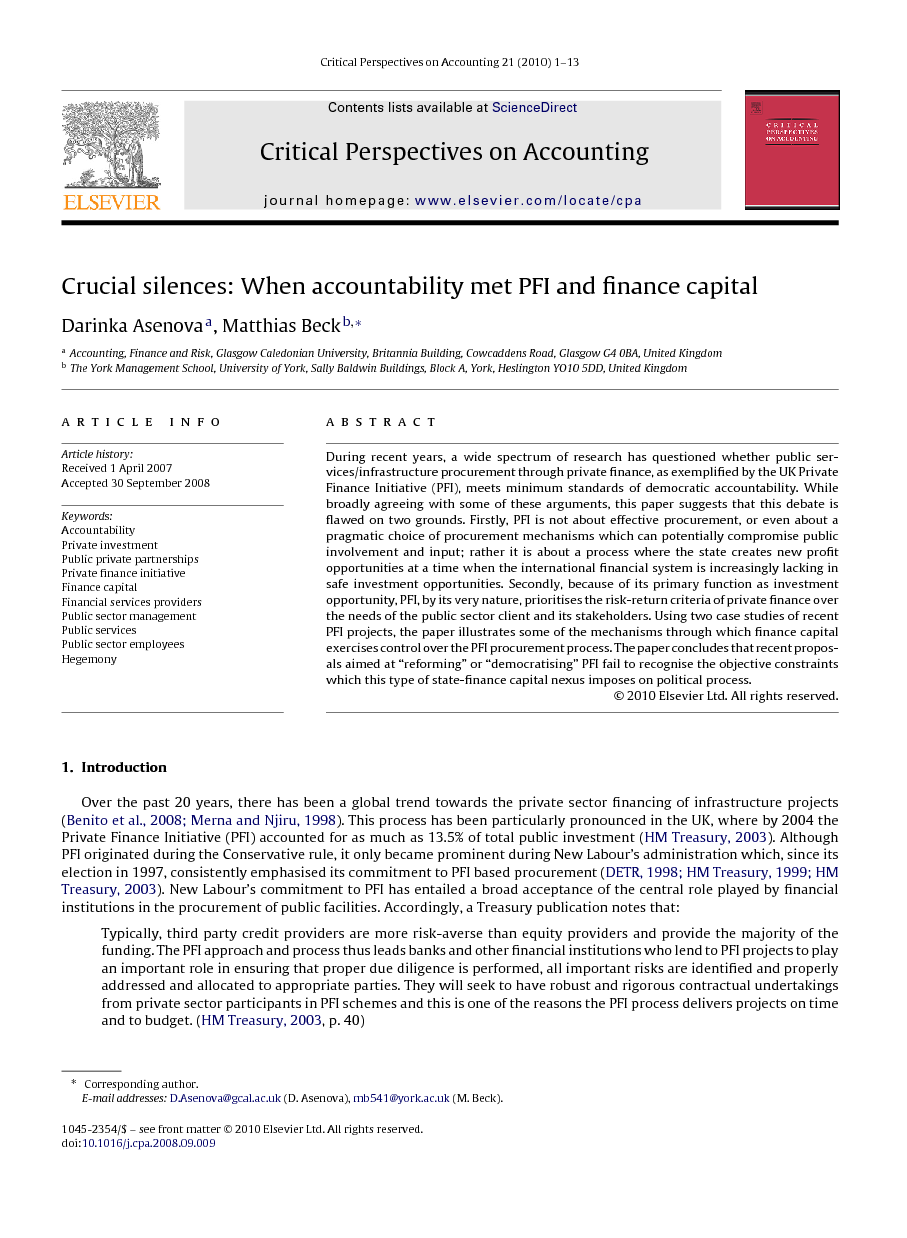 During recent years, a wide spectrum of research has questioned whether public services/infrastructure procurement through private finance, as exemplified by the UK Private Finance Initiative (PFI), meets minimum standards of democratic accountability. While broadly agreeing with some of these arguments, this paper suggests that this debate is flawed on two grounds. Firstly, PFI is not about effective procurement, or even about a pragmatic choice of procurement mechanisms which can potentially compromise public involvement and input; rather it is about a process where the state creates new profit opportunities at a time when the international financial system is increasingly lacking in safe investment opportunities. Secondly, because of its primary function as investment opportunity, PFI, by its very nature, prioritises the risk-return criteria of private finance over the needs of the public sector client and its stakeholders. Using two case studies of recent PFI projects, the paper illustrates some of the mechanisms through which finance capital exercises control over the PFI procurement process. The paper concludes that recent proposals aimed at “reforming” or “democratising” PFI fail to recognise the objective constraints which this type of state-finance capital nexus imposes on political process.

Despite the differences between the two schemes, the approaches of the financial institutions to the “financial management” of these projects were broadly similar. The key consideration of the financiers was that, under PFI procurement, their risks were allied with the risks of the borrower, the SPV. Therefore, a series of actions were taken to ensure that an “acceptable” approach to risk management had been taken. In this context, the banks scrutinised the contractual risk allocation while attempting to ensure that all important risks were passed through the SPV to the parties that had definite control over them. Meanwhile, the capital providers themselves largely steered clear of substantial risk taking. Very few residual risks were allowed to remain with the SPV and even for those risks, the financiers required strong evidence, particularly in terms of past experience, skills and resources. For the financiers, the “proper” allocation of crucial commercial risks was a key criterion for determining the “financeability” of the particular transaction. Most risks were investigated on the basis of the full contractual documentation, including the main project agreement and the supplementing sub-contracts. Once the main project risks were mitigated, the residual risks were then assessed in detail in the course of the due diligence. In case of the first project, the risk assessment process conducted by the financial services providers led to the allocation of demand risk to the client, which ultimately made it impossible for the project to be treated off-balance-sheet. In case of the second project, concern by the financial services providers led to the introduction of construction bonds and other guarantees, which arguably increased the cost of the project to the public sector. Past research has attributed comparatively little importance to the role played by financial institutions in PFI procurement. This omission is problematic for several reasons. Firstly, any study which underplays the role played by financial institutions in PFI procurement is likely to ignore the genuine material considerations which make and break PFI deals. PFI's, viewed from an economic perspective, do not stand in a financial vacuum. Rather, their scope and feasibility is intrinsically linked to the expectations of those operating more or less collectively within financial markets. As such, the feasibility of conducting PFIs in general depends on those market conditions which, at a given time, favour the financing of PFIs, but will not necessarily do so in the future. Secondly, decision making on PFI projects is hardly a political process in the traditional sense. Rather, when due attention is paid to the role of financiers in PFI, it is a process which is conditioned primarily by the expectations and requirements of individual suppliers of finance capital. These expectations take precedence over other considerations, including the public sector's quest for innovative or high quality services. In this sense, the relevance of research into PFI risk management arises not from its descriptive value, but rather from the fact that the views of the financial sector companies on the riskiness of projects and appropriate measures for risk mitigation concretely constrain the range of possibilities available to individual PFI projects. As principal players in PFI projects, senior debt providers determine to large degree what presents a commercially acceptable project. As such, they can dictate which measures other PFI participants must undertake in order to gain their approval. The application of these approval criteria is implicit to the PFI procurement process. In other words, financial service providers do not upfront prescribe how others must structure a project in order to ensure participation in a project and the availability of finance. However, where these requirements are not met, finance will ultimately not be available. With regard to the issue of accountability in PFI projects, it must therefore be understood that the prerequisite of obtaining capital from the private sector will inevitably limit levels of openness and discussion on crucial financial and project parameters. Financial services providers rarely disclose the details of their financial models or their risk assessment procedures. What is relevant to them are not minute project details but rather questions about the allocation, mitigation and retention of key risks; and very few of these details are subject to public scrutiny. PFI procurement, at least in theory, is premised on the assumption that mutual gains will arise from the partnership of public and private sector organisations (HM Treasury, 2003). Against this rhetoric of PFI, as well as the assumption that there are readily available recipes for introducing accountability into PFI, stands the simple fact that these deals can only be concluded if the risk-return criteria set by the financiers are met. As the UK enters a second decade of PFI procurement, it is perhaps appropriate that we reflect more carefully, not only on its social and economic costs, but also on its increasingly obvious negative political implications. Today, PFI procurement in the UK, and elsewhere, carries the possibility of establishing a new legacy of anti-democratic public sector governance which has the very real potential of undermining what little is left of the democratic aspirations of post neo-liberal societies.