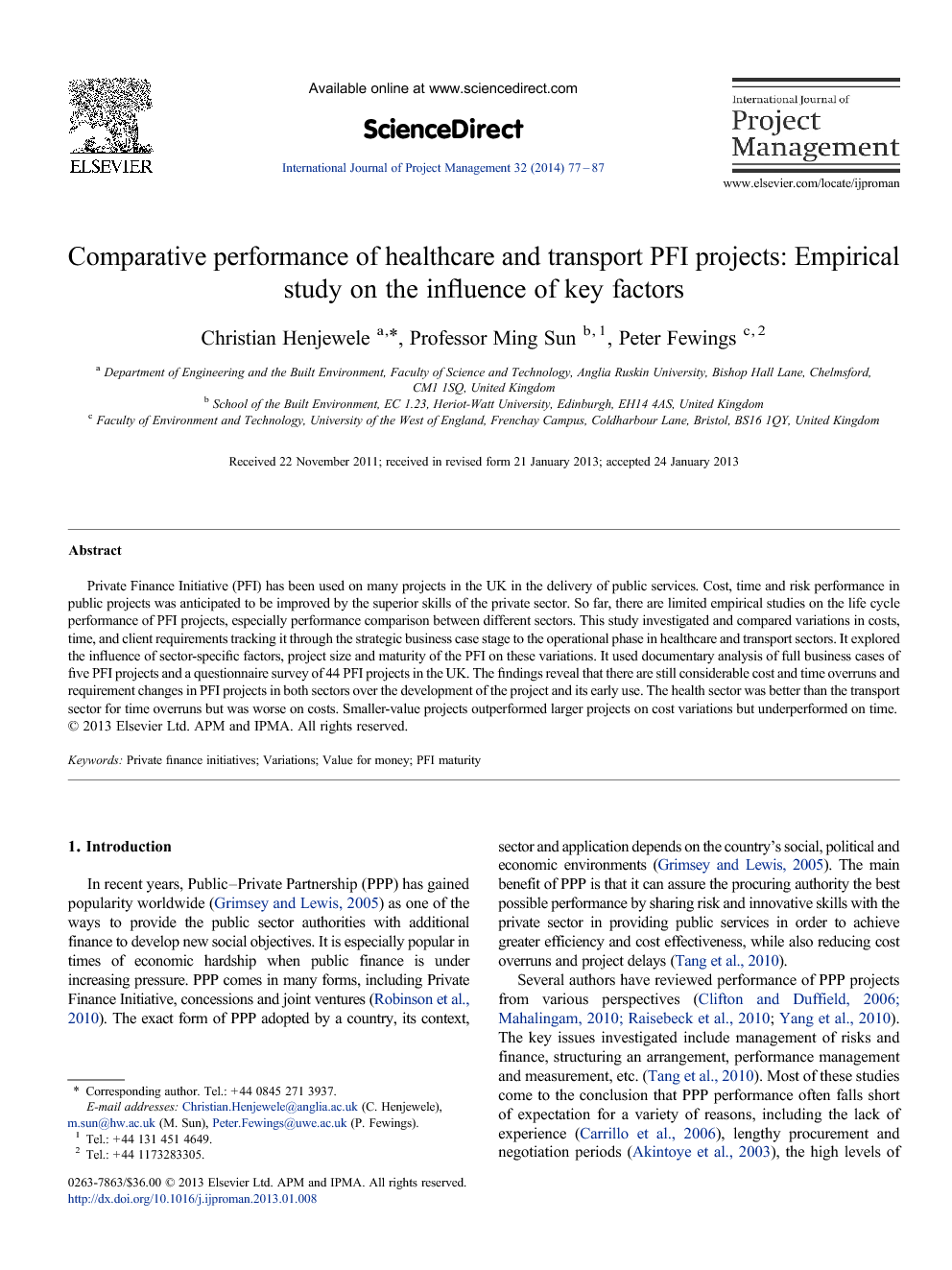 Private Finance Initiative (PFI) has been used on many projects in the UK in the delivery of public services. Cost, time and risk performance in public projects was anticipated to be improved by the superior skills of the private sector. So far, there are limited empirical studies on the life cycle performance of PFI projects, especially performance comparison between different sectors. This study investigated and compared variations in costs, time, and client requirements tracking it through the strategic business case stage to the operational phase in healthcare and transport sectors. It explored the influence of sector-specific factors, project size and maturity of the PFI on these variations. It used documentary analysis of full business cases of five PFI projects and a questionnaire survey of 44 PFI projects in the UK. The findings reveal that there are still considerable cost and time overruns and requirement changes in PFI projects in both sectors over the development of the project and its early use. The health sector was better than the transport sector for time overruns but was worse on costs. Smaller-value projects outperformed larger projects on cost variations but underperformed on time.

This study explored the effect of project attributes on the performance of PFI projects to validate some common claims relating to project size, sector specifics and maturity of PFI with time. The preliminary analysis, which underpinned the comparison of projects by attributes, found that the surveyed projects experienced substantial variations (in client requirements, time and cost) before they reached the financial close stage. Once these projects were operational, operating costs and unitary charges continued to escalate. Iterations in client's requirements are found to increase project development and procurement lengths, hence putting both contractual and transactional costs at risk of overrun. Projects, regardless of their relative sizes or service sector, experienced variations at all stages. However, in some healthcare projects, more facilities and services were added during the operating phase, which resulted into a substantial increase in capital cost for those projects. On the other hand, transport projects are seen to have better defined client requirements, but still experienced more variations than healthcare projects. Healthcare projects, which require more detailed output specifications and complex design, are more likely to undergo reiteration in project scope and delivery units, but once they have settled on output specifications, they perform relatively better. PFI maturity and the effort to improve guidance and organisation structure brought in some positive results in the definition of client's requirements and improved predictability of time and cost at the outline business case stage. However, further efforts are required to reverse the worsening of the procurement phase, which affects the robustness of value for money. This is particularly important for small projects, which in addition, need to combat over specifying output specifications and complete the milestones in timelier manner. The study found no significant relationship between variations and project size or sector specifics, but PFI maturity has a significant impact on performance.