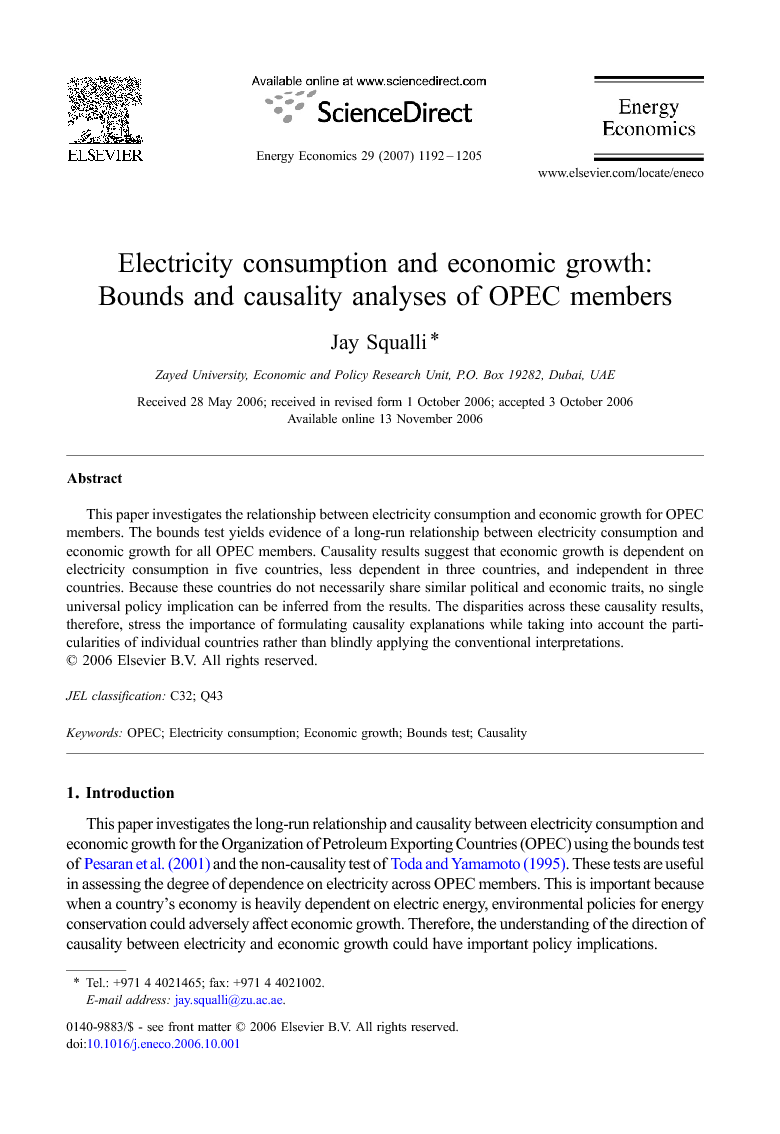 This paper investigates the relationship between electricity consumption and economic growth for OPEC members. The bounds test yields evidence of a long-run relationship between electricity consumption and economic growth for all OPEC members. Causality results suggest that economic growth is dependent on electricity consumption in five countries, less dependent in three countries, and independent in three countries. Because these countries do not necessarily share similar political and economic traits, no single universal policy implication can be inferred from the results. The disparities across these causality results, therefore, stress the importance of formulating causality explanations while taking into account the particularities of individual countries rather than blindly applying the conventional interpretations.

This paper investigates the long-run relationship and causality between electricity consumption and economic growth for the Organization of Petroleum Exporting Countries (OPEC) using the bounds test of Pesaran et al. (2001) and the non-causality test of Toda and Yamamoto (1995). These tests are useful in assessing the degree of dependence on electricity across OPEC members. This is important because when a country's economy is heavily dependent on electric energy, environmental policies for energy conservation could adversely affect economic growth. Therefore, the understanding of the direction of causality between electricity and economic growth could have important policy implications. There has been an on-going debate about to what extent abundant natural resources may undermine political institutions, induce corruption and rent-seeking behavior, promote the misallocation and mismanagement of resources, and stifle economic progress. This is commonly referred to as the “resource curse” (Auty, 1993). In fact, there is empirical evidence linking resource abundance with poor economic growth (Sachs and Warner, 1995). More specifically, over a period of 33 years, since 1965, OPEC members experienced an average decrease of 1.3% in per capita gross national product versus an average growth rate of 2.2% in the rest of the developing world (Gylfason, 2000). Fortunately, oil and gas abundance has allowed most OPEC members to benefit from high electrification rates currently exceeding 94% for most OPEC members except for Indonesia and Nigeria, which stand at about 53% and 40% respectively (International Energy Agency (IEA), 2002). Two strands are identified in the literature analyzing the relationship between energy consumption and economic growth. The first strand includes the proponents of energy consumption as a primary means to achieve economic growth. Energy is expected to play a primary role in achieving economic, social, and technological progress and to complement labor and capital in production (Dunkerley, 1982, Ebohon, 1996 and Templet, 1999). The second strand describes the role of energy as minimal or neutral and is commonly referred to as the “neutrality hypothesis” (Yu and Choi, 1985). This hypothesis stems from the fact that energy consumption, and electricity in particular, should not affect economic growth because it represents too small of a proportion of a country's gross domestic product. According to the empirical literature analyzing causality between energy consumption and economic growth, when causality flows from energy to income, then an economy is theoretically dependent on energy and economic growth can be adversely affected by a reduction in energy consumption. When causality flows from income to energy, then an economy is relatively less dependent on energy and environmental policies for energy conservation would have little to no impact on economic growth. Bi-directional causality, on the other hand, suggests that energy and economic growth complement each other.1 These theoretical contentions have been generally based on positive causality, however when causality is negative, the energy dependence interpretation becomes less intuitive and opens the door to a number of alternative interpretations. In fact, when causality flows negatively from energy to income, then increasing energy consumption leads to lower economic growth. Intuitively, this could simply describe a growing economy that requires a decreasing amount of energy, potentially consistent with the contention that as an economy grows, production ought to shift to less energy intensive service sectors (Wolde-Rufael, 2005). However, because of political, economic, and social differences across OPEC members, interpretations of such a causality may be numerous. In fact, it can be argued that this negative causality from energy to economic growth can be the result of excessive use of energy in unproductive sectors coupled with capacity constraints or an inefficient supply of energy.2 When causality flows negatively from income to energy, then increased economic growth results in reduced energy consumption. The interpretation of such a causality is not so clear as several factors may be the culprit in the adverse impact on energy consumption. In fact, an economy, although growing, may be constrained by infrastructural, political, or managerial obstacles, which may put downward pressure on energy consumption. Moreover, political factors coupled with the mismanagement or inadequate allocation of a country's income can result in widespread inefficiencies, poverty, and a reduced demand for goods and services, including energy. This paper aims to break the silence in the empirical literature about OPEC members, and particularly those in the Middle East. In fact, there have been no individual causality studies on Iran, Iraq, Kuwait, Libya, Qatar, Saudi Arabia, and the United Arab Emirates (UAE). The previous literature is limited to a single study by Al-Iriani (2006) in which the author uses panel causality analysis and provides generalized results on GCC countries, namely Bahrain, Kuwait, Oman, Qatar, Saudi Arabia, and the UAE. The author, however, provides no insight on causality for individual countries given their (sometimes substantial) idiosyncrasies. Studies on the rest of OPEC members, on the other hand, have clearly yielded mixed results. Causality has been evidenced to run from GDP to electricity for Algeria (Wolde-Rufael, 2005) and Indonesia (Masih and Masih, 1996) and from electricity to GDP for Indonesia (Asafu-Adjaye, 2000 and Fatai et al., 2004) and Nigeria (Wolde-Rufael, 2005).3 Furthermore, bi-directional causality is validated in the current literature for Nigeria (Ebohon, 1996) whereas the neutrality hypothesis is established for Algeria (Wolde-Rufael, 2006), Indonesia (Soytas and Sari, 2003) and Venezuela (Nachane et al., 1988). The paper is organized as follows: Section 2 provides the profiles of OPEC members. Section 3 describes the empirical methodology. Section 4 describes the data. Section 5 summarizes the results. Section 6 concludes.

There is empirical evidence of a long-run relationship between per capita electricity consumption and real per capita GDP for all members of the OPEC. Economic dependence on electricity exists among Indonesia, Iran, Nigeria, Qatar, and Venezuela, with evidence of complementarity between electricity and economic growth for Iran and Qatar. Therefore, policies for energy conservation in these five countries could hamper economic growth. It is surprising to find economic growth for Algeria, Iraq, and Libya to be independent of electricity consumption, given their political and economic struggles. This can be the result of “forced independence” due to potential resource mismanagement. In fact, a country's resources can be so mismanaged that they become too unreliable for economic growth. Hence, production may be diverted to sectors that are not necessarily energy intensive. This is further supported by the negative causality from GDP and electricity consumption, which suggests that economic growth for these three countries appears to result in lower electricity consumption, suggesting that the benefits from income growth are not necessarily transferred to end users. Further evidence indicates that policies for energy conservation can have little to no impact on economic growth in the most advanced economies of the Gulf, namely Kuwait, Saudi Arabia, and the UAE. Although the procedures used yield consistent results for the most part, interpretations ought to be treated with caution due to the possibility of loss in power associated with the small sample size. In fact, the use of bi-variate analyses may be too simplistic to yield robust policy recommendations due to potential omitted variable bias. Furthermore, high electricity losses that some countries face (e.g. Nigeria) along with low access to electricity that may be partially satisfied through other means (e.g. diesel power generators), would raise serious data concerns due to noninclusion in official statistics. Although the countries considered in this study are endowed with vast oil resources, their level of economic and political development vary considerably. Hence, causality results must be assessed while taking into account the particularities of individual countries rather than blindly applying the conventional interpretations.