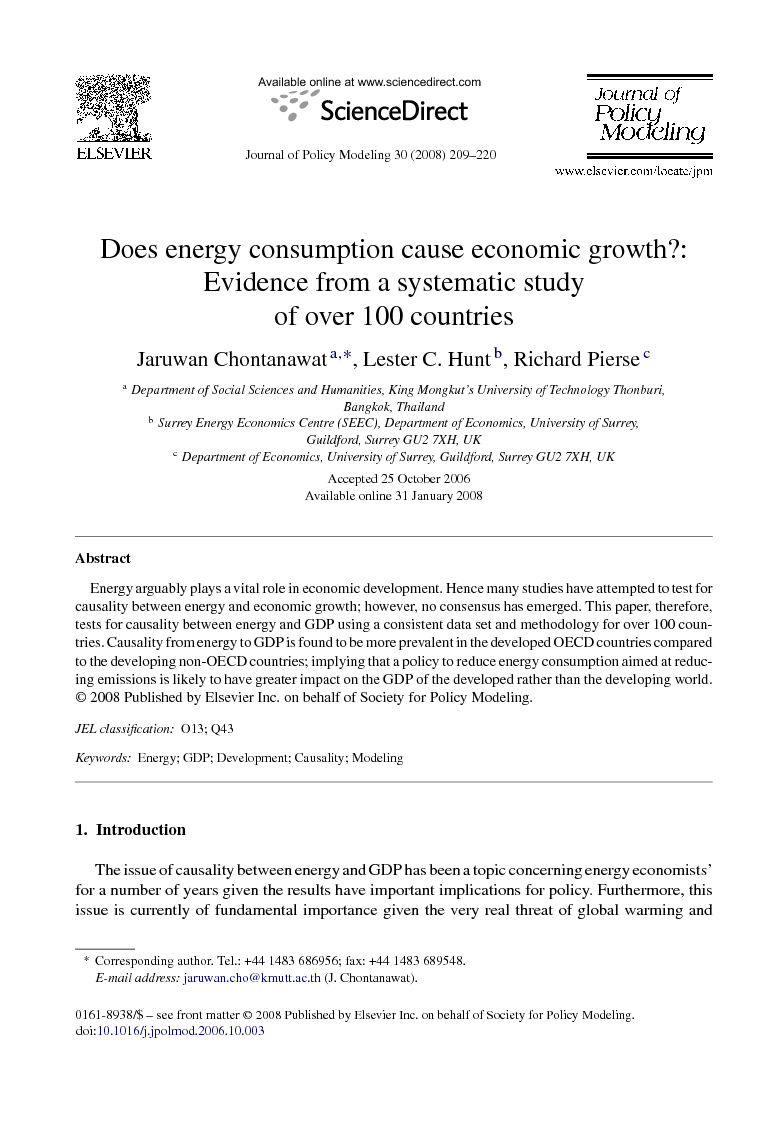 Energy arguably plays a vital role in economic development. Hence many studies have attempted to test for causality between energy and economic growth; however, no consensus has emerged. This paper, therefore, tests for causality between energy and GDP using a consistent data set and methodology for over 100 countries. Causality from energy to GDP is found to be more prevalent in the developed OECD countries compared to the developing non-OECD countries; implying that a policy to reduce energy consumption aimed at reducing emissions is likely to have greater impact on the GDP of the developed rather than the developing world.

The issue of causality between energy and GDP has been a topic concerning energy economists’ for a number of years given the results have important implications for policy. Furthermore, this issue is currently of fundamental importance given the very real threat of global warming and hence the need to cut energy consumption to reduce emissions to help stem climate change. This paper therefore attempts to address this issue in a global context by consistently and systematically testing whether energy consumption causes economic growth for over 100 countries. Whether energy consumption is a stimulus for GDP or not has (as pointed out by, amongst others, Ghali & El-Sakka, 2004 and Wolde-Rufael, 2005) been an ongoing debate among energy economists. On one hand, it is argued that energy is a vital and necessary input along with other factors of production (such as labor and capital). Consequently, energy is a necessary requirement for economic and social development so that energy is potentially a “limiting factor to economic growth” (Ghali & El-Sakka, 2004, p.225). On the other hand, it is argued that since the cost of energy is a very small proportion of GDP, it is unlikely to have a significant impact; hence there is a “neutral impact of energy on growth” (Ghali & El-Sakka, 2004, p.225).1 In summary, it is crucial that it is determined whether energy consumption is a stimulus to economic growth? (or alternatively from a technical viewpoint, does energy ‘cause’ GDP?) As illustrated above, the answer to this question has important implications for policy makers. In particular if energy causes GDP then reducing consumption could lead to a fall in income and employment. Whereas, as noted by Masih and Masih (1997) if causality from energy to GDP does not exist then energy conservation policies may be initiated without deleterious side effects on growth and employment. It is important therefore, to ascertain empirically whether there is a causal link from energy consumption to GDP. As also highlighted above, this is particularly true given the current debate about global warming and the need to reduce Greenhouse Gas Emissions by conserving energy consumption, since any constraints put on energy consumption to help reduce emissions will have an effect on growth and development if causality from energy to GDP exists. Moreover, if the causal link is greater for non-OECD/developing countries, then any restraint on energy consumption will have a bigger effect on these countries compared to the more affluent OECD industrialized countries. In this case it could be argued that any reduction in energy consumption should predominantly be undertaken by the developed world so as not to inhibit the development of the less developed nations. Given the importance of this issue it is not surprising that there have been a number of attempts to quantify the relationship for a number of different countries. A comprehensive list is summarized in Chontanawat, Hunt, and Pierse (2006) and shows that the existence (or otherwise) of causality from energy to GDP has been the subject of some investigation and debate by economists and econometricians. This highlights that the results are very mixed with no clear consensus emerging. Different results for different countries are not necessarily surprising given the “many institutional, structural, and policy differences” (Masih and Masih, 1997, p. 419). However, the lack of consensus for particular countries (and countries with similar characteristics and stage of development) is somewhat surprising, which according to Masih and Masih (1997) is primarily due to methodological differences in terms of definition and specification of variables, the econometric techniques employed, and the lag structures chosen. This paper therefore attempts to address this issue. A systematic and consistent methodology is adopted to test whether there is evidence of causality from energy to GDP for 30 OECD countries and 78 non-OECD countries and, in particular, test the hypothesis that the link is more prevalent for the non-OECD developing countries. The next section outlines the methodology, followed by Section 3, which presents the results. The final section summarizes and concludes.

This study empirically investigates the causal relationship running from energy consumption to GDP for 30 OECD and 78 non-OECD countries. Causality tests are systematically performed using recently developed techniques. To generate a clearer distinction between developed and developing countries, the HDI has been adopted to categorize the countries. This shows that energy causes GDP to some extent. However, contrary to initial expectations, it is found that a greater proportion of OECD/developed countries show energy to GDP causality than that for non-OECD/developing countries. This therefore refutes the hypothesis set out in Section 1 about the relationship between energy and GDP, instead it suggests that the degree of causality from energy to GDP is generally less prevalent in the developing world than the developed world, thus supporting the view that energy is generally neutral with respect to its effect on economic growth in the developing world. Moreover, this implies that the effect of energy conservation policies to help combat global warning would have a greater detrimental effect on the overall growth of OECD/developed countries than that of the overall growth of non-OECD/developing countries. Nonetheless, a minority of developing countries would be affected given that the results still suggest that there would be causality from energy to GDP for 35% of the poorest nations and 42% of the mid income nations. However, causality is not found for the two developing countries with the most impressive growth over recent years: China and India—perhaps suggesting that they should be brought into future climate change agreements. Of course, the results might reflect the reliance of the large developed economies, such as the USA, on energy sources such as electricity and gasoline whereas many developing countries are still reliant on more primitive energy sources (including non-commercial energy). Furthermore, aggregate energy consumption is arguably a crude approximation to energy services, which is the real driver of growth and development; hence further investigation of the effect of disaggregating fuels (into say electricity and gasoline consumption) would help to support or refute the results presented here. Moreover, in order to do a systematic and consistent study for over 100 countries a bivariate approach has been adopted here, whereas a multivariate analysis might produce different results; however, this could not be performed on such a large number of countries due to data limitations. Nevertheless, this is, as far as is known, the first systematic and consistent study of such a large number of countries and has produced results that are contrary to prior expectations; that is causality from energy to GDP is more prevalent in the developed/OECD world than the developing/non-OECD world. As discussed this has significant consequences in a global world trying to reduce energy consumption in order to reduce pollutant emissions since it suggests that this would have a greater impact on the GDP of the developed world than the developing world.