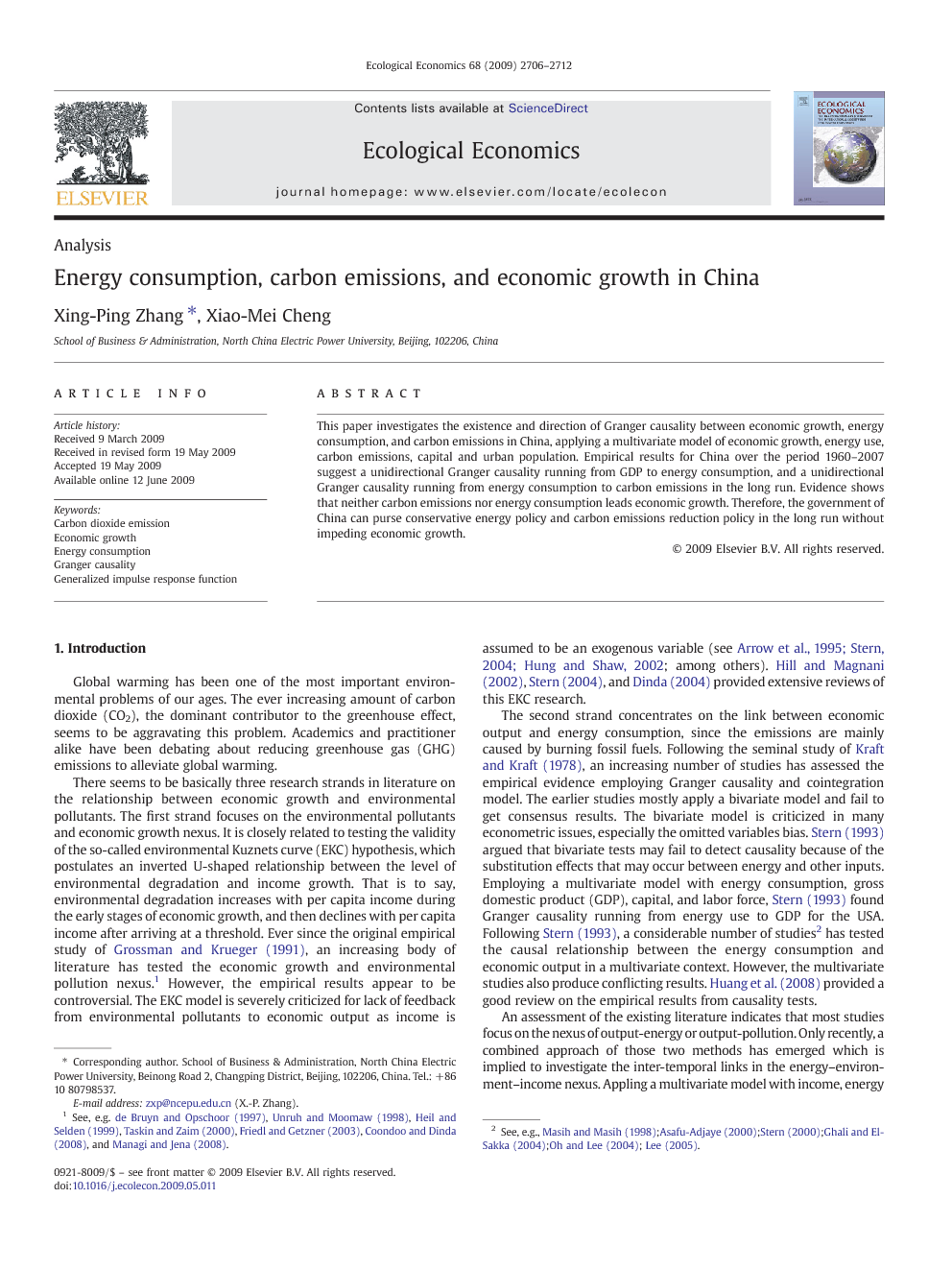 Appling the TY procedure and generalized impulse response, this paper investigates the temporal linkages among GDP, energy consumption, and carbon emissions for China during the period 1960–2007 in a multivariate model including gross fixed capital formation and urban population. The empirical finding of unidirectional Granger causality from real GDP to energy consumption in the long run implies that the government of China can implement stronger energy conservative policy without compromising economic growth in the long run. However, the results of impulse responses provide evidence that shocks in all variables, except urban population, have significant initial impact on one of them. Therefore, enhancing energy efficiency is an effective way to save energy. Although the energy intensity has experienced sharp decline in China, the energy intensity is rather high than that of world average level. So China should apply technological changes to greatly decrease energy intensity. China has made an ambiguous and challenging goal of decreasing the energy intensity by 20% between 2006 and 2010. Our results suggest that energy consumption Granger causes carbon emissions in the long run, but not vice versa. Hence, reducing energy consumption, especially the consumption of fossil fuel, seems to be an active way to reduce carbon emissions. It is worth noting that Coal accounts for about 70% of total primary energy in China, which is not only the dominant primary energy but also the dominant source of carbon emissions. On one hand, policies diversifying energy source may be applied to reduce the reliance on coal. China should take active measures to increase the utilization of cleaner energy sources (wind, solar, natural gas, nuclear power). To that respect China has set a specific target for the renewable and nuclear energy: the ratio of renewable energy to total primary energy consumption would be no less than 10% in 2010 and 15% in 2020 (The Medium and Long Term Development Plan for Renewable Energy in China, 2007). The installed capacity of nuclear electricity would up to 4 giga watt (GW), which accounts for 4% of total installed capacity in 2020 (The Medium and Long Term Plan for Nuclear Electricity in China, 2007). On the other hand, since roughly 60% of coal was used to generate power, sustainable coal technologies should be imposed on both the new and existing coal power plants in order to mitigate the environment pressure. Moreover, the small-scale low efficiency coal power plants should be phased out. China government has made a specific goal of closing a total of 50 GW inefficiency coal power plants between 2006 and 2010. Shocks in urban population have no significant initial impacts but positive effects on the others, so the accelerating industrialization has positive effects on the energy use and carbon emissions. The fact that rural population accounts for more than half of total population implies that agriculture should be an important sector in China. China should take measures to promote the development of agriculture, which is beneficial to alleviate environment pressure. The main contribution of the paper is to empirically investigate the inter-temporal links in the energy–environment–income nexus for China. The findings of this analysis may be unique to China due to its specific institutional characteristics. And finally, the results must be interpreted with due caution because of the finite sample.