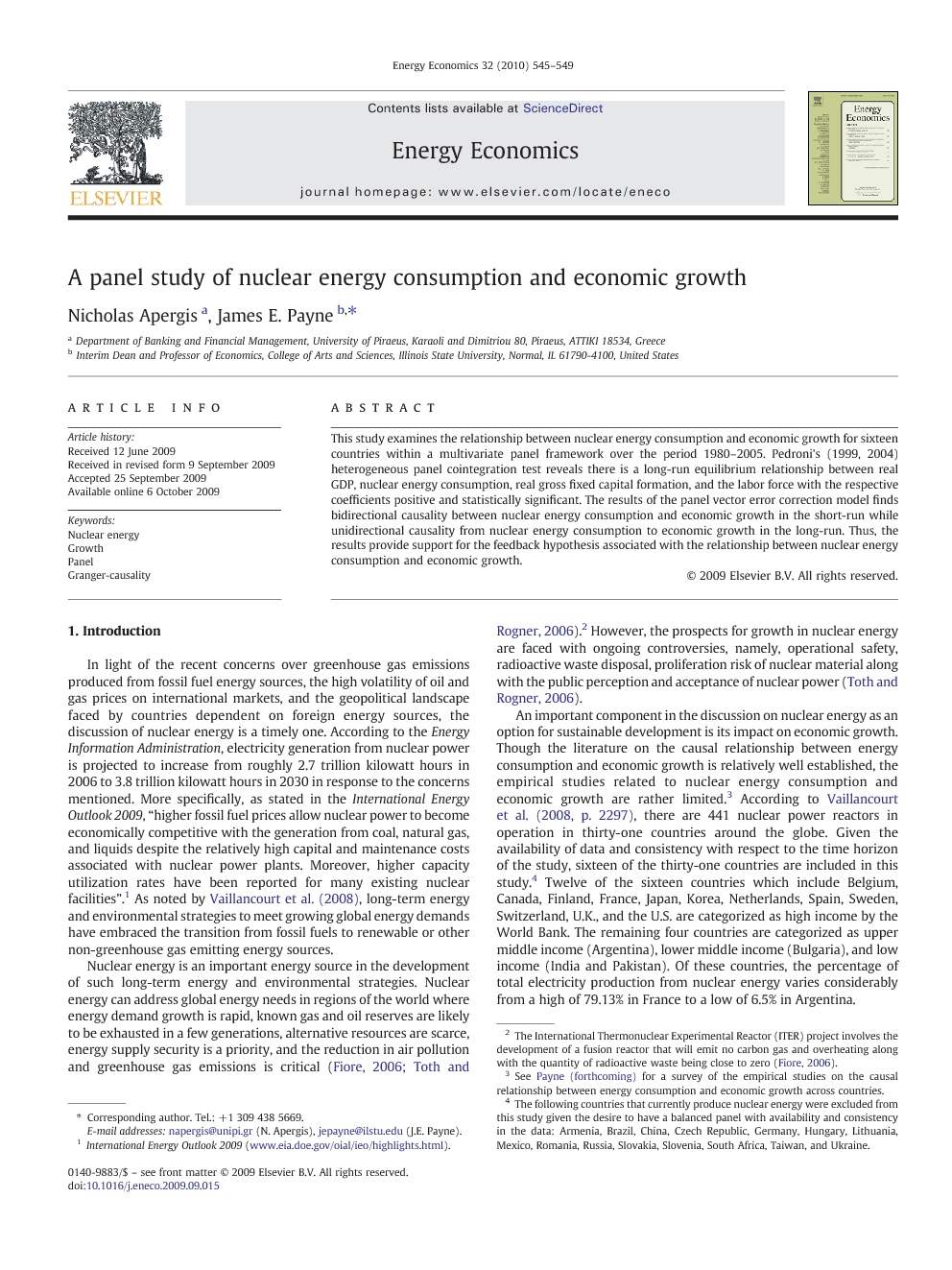 In light of the recent concerns over greenhouse gas emissions produced from fossil fuel energy sources, the high volatility of oil and gas prices on international markets, and the geopolitical landscape faced by countries dependent on foreign energy sources, the discussion of nuclear energy is a timely one. According to the Energy Information Administration, electricity generation from nuclear power is projected to increase from roughly 2.7 trillion kilowatt hours in 2006 to 3.8 trillion kilowatt hours in 2030 in response to the concerns mentioned. More specifically, as stated in the International Energy Outlook 2009, “higher fossil fuel prices allow nuclear power to become economically competitive with the generation from coal, natural gas, and liquids despite the relatively high capital and maintenance costs associated with nuclear power plants. Moreover, higher capacity utilization rates have been reported for many existing nuclear facilities”.1 As noted by Vaillancourt et al. (2008), long-term energy and environmental strategies to meet growing global energy demands have embraced the transition from fossil fuels to renewable or other non-greenhouse gas emitting energy sources. Nuclear energy is an important energy source in the development of such long-term energy and environmental strategies. Nuclear energy can address global energy needs in regions of the world where energy demand growth is rapid, known gas and oil reserves are likely to be exhausted in a few generations, alternative resources are scarce, energy supply security is a priority, and the reduction in air pollution and greenhouse gas emissions is critical (Fiore, 2006 and Toth and Rogner, 2006).2 However, the prospects for growth in nuclear energy are faced with ongoing controversies, namely, operational safety, radioactive waste disposal, proliferation risk of nuclear material along with the public perception and acceptance of nuclear power (Toth and Rogner, 2006). An important component in the discussion on nuclear energy as an option for sustainable development is its impact on economic growth. Though the literature on the causal relationship between energy consumption and economic growth is relatively well established, the empirical studies related to nuclear energy consumption and economic growth are rather limited.3 According to Vaillancourt et al. (2008, p. 2297), there are 441 nuclear power reactors in operation in thirty-one countries around the globe. Given the availability of data and consistency with respect to the time horizon of the study, sixteen of the thirty-one countries are included in this study.4 Twelve of the sixteen countries which include Belgium, Canada, Finland, France, Japan, Korea, Netherlands, Spain, Sweden, Switzerland, U.K., and the U.S. are categorized as high income by the World Bank. The remaining four countries are categorized as upper middle income (Argentina), lower middle income (Bulgaria), and low income (India and Pakistan). Of these countries, the percentage of total electricity production from nuclear energy varies considerably from a high of 79.13% in France to a low of 6.5% in Argentina. Specifically, this study extends the existing literature with the inclusion of more countries than in previous studies as well as examining the causal relationship within a multivariate panel cointegration/error correction framework which combines the cross-section and time series data while allowing for heterogeneity across countries. Indeed, consideration of the implications of nuclear energy for economic growth is relevant in the discussion of the global energy portfolio that can address the current and future economic and environmental concerns about the world's energy supply. Section 2 briefly overviews the hypotheses related to the causal relationship between energy consumption and economic growth along with a summary of the previous studies on the causal relationship between nuclear energy consumption and economic growth. Section 3 discusses the data, methodology, and empirical results. Concluding remarks are given in Section 4.