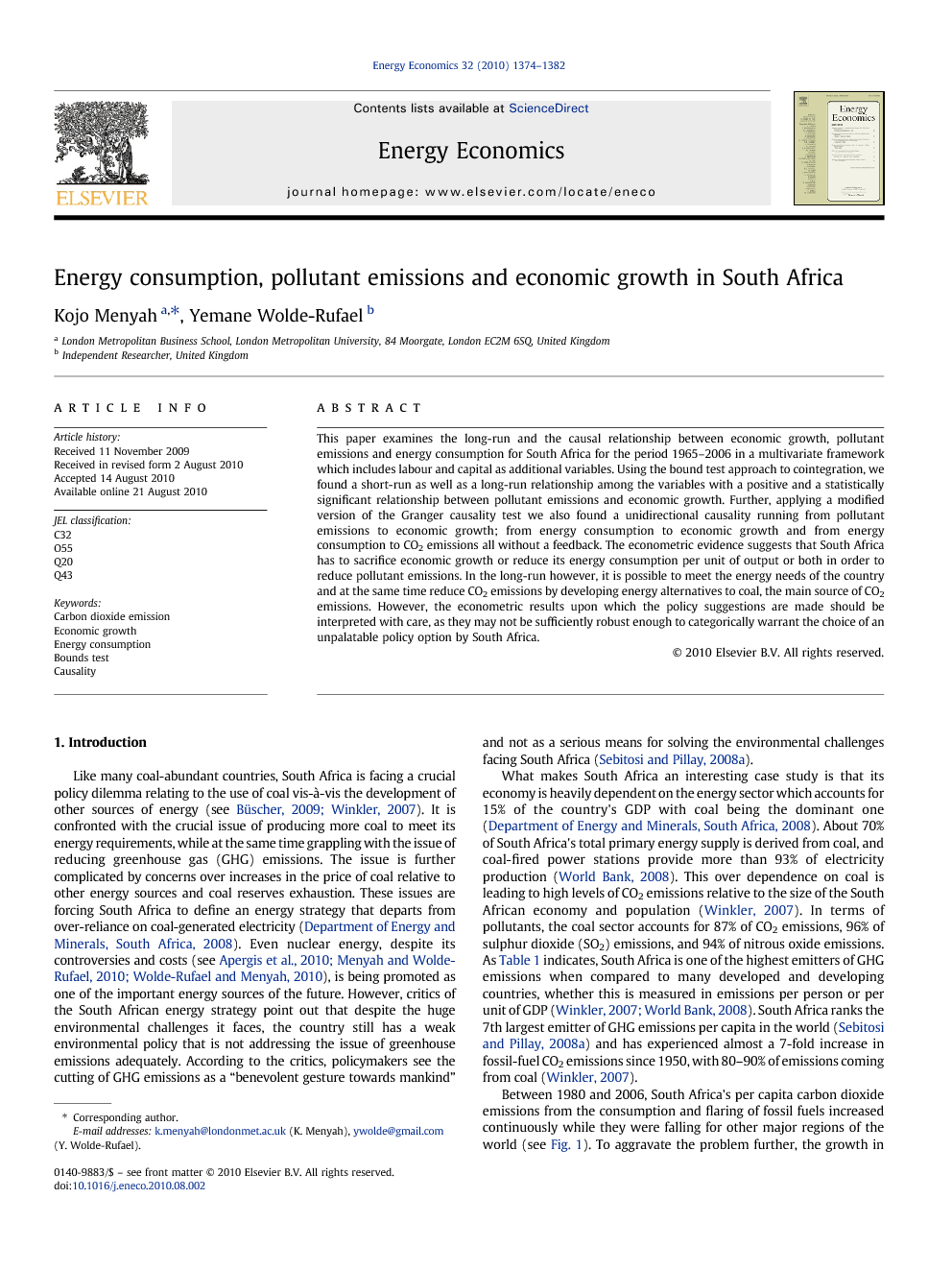 Like many coal-abundant countries, South Africa is facing a crucial policy dilemma relating to the use of coal vis-à-vis the development of other sources of energy (see Büscher, 2009 and Winkler, 2007). It is confronted with the crucial issue of producing more coal to meet its energy requirements, while at the same time grappling with the issue of reducing greenhouse gas (GHG) emissions. The issue is further complicated by concerns over increases in the price of coal relative to other energy sources and coal reserves exhaustion. These issues are forcing South Africa to define an energy strategy that departs from over-reliance on coal-generated electricity (Department of Energy and Minerals, South Africa, 2008). Even nuclear energy, despite its controversies and costs (see Apergis et al., 2010, Menyah and Wolde-Rufael, 2010 and Wolde-Rufael and Menyah, 2010), is being promoted as one of the important energy sources of the future. However, critics of the South African energy strategy point out that despite the huge environmental challenges it faces, the country still has a weak environmental policy that is not addressing the issue of greenhouse emissions adequately. According to the critics, policymakers see the cutting of GHG emissions as a “benevolent gesture towards mankind” and not as a serious means for solving the environmental challenges facing South Africa (Sebitosi and Pillay, 2008a). What makes South Africa an interesting case study is that its economy is heavily dependent on the energy sector which accounts for 15% of the country's GDP with coal being the dominant one (Department of Energy and Minerals, South Africa, 2008). About 70% of South Africa's total primary energy supply is derived from coal, and coal-fired power stations provide more than 93% of electricity production (World Bank, 2008). This over dependence on coal is leading to high levels of CO2 emissions relative to the size of the South African economy and population (Winkler, 2007). In terms of pollutants, the coal sector accounts for 87% of CO2 emissions, 96% of sulphur dioxide (SO2) emissions, and 94% of nitrous oxide emissions. As Table 1 indicates, South Africa is one of the highest emitters of GHG emissions when compared to many developed and developing countries, whether this is measured in emissions per person or per unit of GDP (Winkler, 2007 and World Bank., 2008). South Africa ranks the 7th largest emitter of GHG emissions per capita in the world (Sebitosi and Pillay, 2008a) and has experienced almost a 7-fold increase in fossil-fuel CO2 emissions since 1950, with 80–90% of emissions coming from coal (Winkler, 2007).Between 1980 and 2006, South Africa's per capita carbon dioxide emissions from the consumption and flaring of fossil fuels increased continuously while they were falling for other major regions of the world (see Fig. 1). To aggravate the problem further, the growth in coal use is expected to continue or even accelerate over the next few years as South Africa is building more coal-powered stations to meet its growing energy needs and also to redress the past inequitable distribution of electricity use among its races (Winkler, 2007 and Sebitosi and Pillay, 2008a).South Africa's energy consumption per capita and CO2 emissions per capita have been growing faster than real GDP per capita and there is no doubt that the current emission profile poses a significant challenge to the country's energy development strategy (Fig. 2).Studies that link economic growth, energy consumption and pollutant emissions in the same framework tend not to focus on South Africa. Most of the studies that relate to South Africa only investigate the link between energy consumption and economic growth (see, Ziramba, 2009, Odhiambo, 2009, Wolde-Rufael, 2006 and Wolde-Rufael, 2009). To our knowledge, there are no specific studies for South Africa that have employed modern advances in time series econometrics of cointegration and causality to test the relationship between energy consumption, pollutant emissions and economic growth in a coherent framework. The aim of this paper is to fill this gap by investigating the relationship between economic growth, energy consumption and pollutant emissions in a multivariate framework by including labour and capital as additional variables. The purpose is to show how environmental degradation and other crucial variables such as energy, combine with capital and labour to affect the growth process. From an econometric point of view, we include these additional variables because the exclusion of relevant variables makes the estimates not only biased but also inconsistent, but the absence of causality in a bivariate system can arise from omitted variables (Lütkepohl, 1982). However, since a five-variable case incorporates more information than a bivariate case, the causal inference drawn may be relatively more reliable (Loizides and Vamvoukas, 2005). In this paper, tests for establishing the long-run relationship between the variables are carried out by using the cointegration procedure developed by Pesaran et al. (2001), hereafter PSS, while testing for causality is conducted using a modified version of the Granger causality test proposed by Toda and Yamamoto (1995), hereafter, TY which is valid regardless whether a series is I(0), I(1) or I(2), non-cointegrated or cointegrated of any arbitrary order. To reinforce our empirical findings, we also quantify how much feedback exists from one series to the other using the generalized forecast error variance decomposition technique proposed by Pesaran and Shin (1998), which is invariant to the ordering of the variables. The rest of the paper is structured as follows. In Section 2 we present a brief review of the empirical literature followed by a discussion of the methodology used in Section 3. The empirical evidence is presented in Section 4 while the summary and the concluding remarks are outlined in Section 5.

Like many coal-abundant and major coal consuming countries, South Africa is facing a crucial challenge on the extent to which fossil fuel can be used to generate electricity. The country is confronted with the crucial issue of balancing its sectoral energy strategies to produce more coal while at the same time having to reduce greenhouse gas emissions (GHG) which is largely generated by coal-fired power stations. This paper examined the cointegration and the causal relationship between economic growth, pollutant emissions, energy consumption, labour and capital in South Africa for the period 1965–2006 by applying the cointegration approach developed by Pesaran et al. (2001) and using the modified version of the Granger causality test proposed by Toda and Yamamoto (1995). Our empirical results suggest that there was a short-run as well as a long-run relationship between the variables with a positive and a significant relationship between pollutant emissions and economic growth. Our causality tests also indicate that there was a unidirectional Granger causality running from pollutant emissions to economic growth; from energy consumption to economic growth and from energy consumption to CO2, all without feedback. The evidence seems to suggest that economic growth is not a solution to reducing the levels of CO2 emissions. If South Africa is to reduce its emission levels, it has to reduce not only energy consumption per unit of output but it may sacrifice its economic growth. An alternative and viable option for South Africa is to increase the use of alternative sources of energy that are relatively free from pollutant emissions. South Africa is endowed with adequate sources of renewable energy that can simultaneously address both the energy needs as well as the environmental concerns due to CO2 emissions. So far, the evidence indicates that South Africa has not fully exploited these alternative energy resources. To combat energy shortages and address the environmental degradation facing the country, there is a need for South Africa to develop strategies to exploit its clean energy potential and increase their utilization. Research and investment in clean energy should be an integral part of the process of controlling GHG emissions and finding alternative sources of energy to coal. Improving energy efficiency and the exploitation of the country's renewable energy are viable options for meeting the significant energy and environmental challenges facing the country. However, the econometric results upon which the policy suggestions are made should be interpreted with care, as they may not be robust enough to categorically warrant the choice of an unpalatable policy option by South Africa.