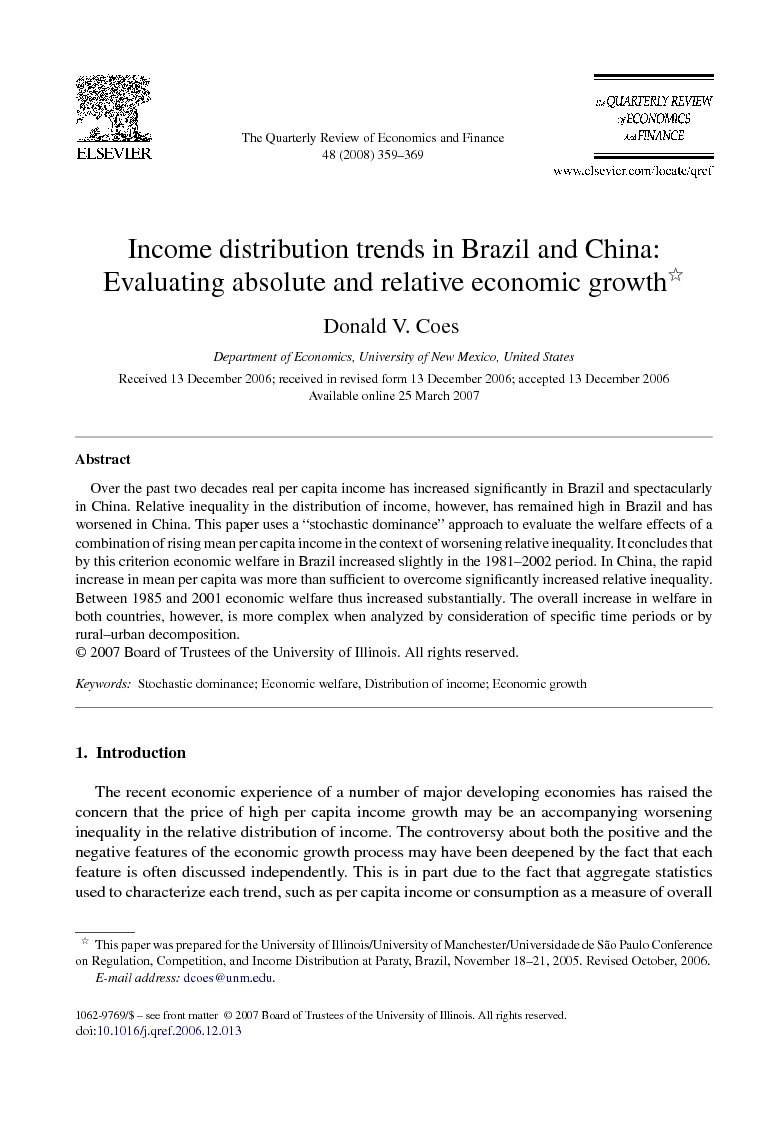 Over the past two decades real per capita income has increased significantly in Brazil and spectacularly in China. Relative inequality in the distribution of income, however, has remained high in Brazil and has worsened in China. This paper uses a “stochastic dominance” approach to evaluate the welfare effects of a combination of rising mean per capita income in the context of worsening relative inequality. It concludes that by this criterion economic welfare in Brazil increased slightly in the 1981–2002 period. In China, the rapid increase in mean per capita was more than sufficient to overcome significantly increased relative inequality. Between 1985 and 2001 economic welfare thus increased substantially. The overall increase in welfare in both countries, however, is more complex when analyzed by consideration of specific time periods or by rural–urban decomposition.

The recent economic experience of a number of major developing economies has raised the concern that the price of high per capita income growth may be an accompanying worsening inequality in the relative distribution of income. The controversy about both the positive and the negative features of the economic growth process may have been deepened by the fact that each feature is often discussed independently. This is in part due to the fact that aggregate statistics used to characterize each trend, such as per capita income or consumption as a measure of overall growth, and the Gini coefficient or the Lorenz curve as indicators of relative income inequality, may indeed be calculated and examined in isolation from each other. The difficulty with considering each trend in isolation is that it easily leads to arbitrary value judgments about the success or failure of the development process. A more satisfactory approach must consider per capita income growth and relative inequality in the distribution of income simultaneously. Such an evaluation, however, requires an explicit consideration of the preferences that underlie judgments that one kind of economic growth outcome is preferred to another. Economists have traditionally summarized these kinds of preferences using utility functions, while seeking to make the resulting judgments as general as possible. This is the approach of this paper, which uses a utility-based or “stochastic dominance” approach to examine the effects of economic growth in recent decades in Brazil and in China. The use of stochastic dominance rules to compare income distributions is not new.1 This paper extends the approach, however, by using stronger and computationally simpler criteria to make such comparisons. Section 2 is summarizes the intuition, assumptions, and methodology of the stochastic dominance comparison. Section 3 applies the method to data from Brazil's Pesquisa Nacional por Amostra de Domicílios (PNAD), or National Household Sample Survey, from 1981 to 2002, noting some of the sample-specific and country-specific features of these data. Section 4 is a similar application to China's State Statistical Bureau Annual Household Survey, using data from 1985 and 2001. The paper concludes in Section 5 with a discussion of some of the empirical and theoretical limitations faced by any utility-based evaluation of income trends.