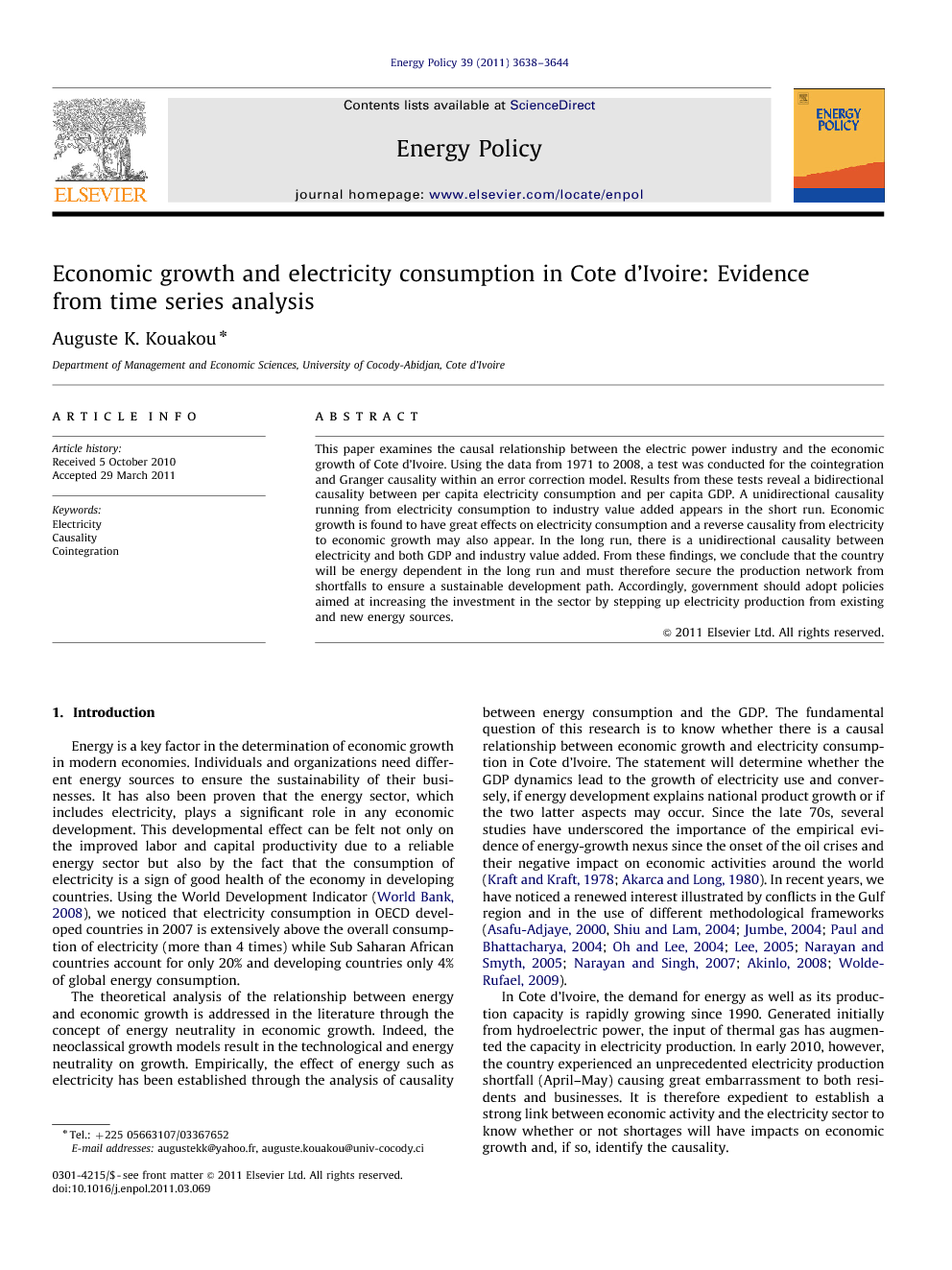 This paper examines the causal relationship between the electric power industry and the economic growth of Cote d'Ivoire. Using the data from 1971 to 2008, a test was conducted for the cointegration and Granger causality within an error correction model. Results from these tests reveal a bidirectional causality between per capita electricity consumption and per capita GDP. A unidirectional causality running from electricity consumption to industry value added appears in the short run. Economic growth is found to have great effects on electricity consumption and a reverse causality from electricity to economic growth may also appear. In the long run, there is a unidirectional causality between electricity and both GDP and industry value added. From these findings, we conclude that the country will be energy dependent in the long run and must therefore secure the production network from shortfalls to ensure a sustainable development path. Accordingly, government should adopt policies aimed at increasing the investment in the sector by stepping up electricity production from existing and new energy sources.

Energy is a key factor in the determination of economic growth in modern economies. Individuals and organizations need different energy sources to ensure the sustainability of their businesses. It has also been proven that the energy sector, which includes electricity, plays a significant role in any economic development. This developmental effect can be felt not only on the improved labor and capital productivity due to a reliable energy sector but also by the fact that the consumption of electricity is a sign of good health of the economy in developing countries. Using the World Development Indicator (World Bank, 2008), we noticed that electricity consumption in OECD developed countries in 2007 is extensively above the overall consumption of electricity (more than 4 times) while Sub Saharan African countries account for only 20% and developing countries only 4% of global energy consumption. The theoretical analysis of the relationship between energy and economic growth is addressed in the literature through the concept of energy neutrality in economic growth. Indeed, the neoclassical growth models result in the technological and energy neutrality on growth. Empirically, the effect of energy such as electricity has been established through the analysis of causality between energy consumption and the GDP. The fundamental question of this research is to know whether there is a causal relationship between economic growth and electricity consumption in Cote d'Ivoire. The statement will determine whether the GDP dynamics lead to the growth of electricity use and conversely, if energy development explains national product growth or if the two latter aspects may occur. Since the late 70s, several studies have underscored the importance of the empirical evidence of energy-growth nexus since the onset of the oil crises and their negative impact on economic activities around the world (Kraft and Kraft, 1978 and Akarca and Long, 1980). In recent years, we have noticed a renewed interest illustrated by conflicts in the Gulf region and in the use of different methodological frameworks (Asafu-Adjaye, 2000, Shiu and Lam, 2004, Jumbe, 2004, Paul and Bhattacharya, 2004, Oh and Lee, 2004, Lee, 2005, Narayan and Smyth, 2005, Narayan and Singh, 2007, Akinlo, 2008 and Wolde-Rufael, 2009). In Cote d'Ivoire, the demand for energy as well as its production capacity is rapidly growing since 1990. Generated initially from hydroelectric power, the input of thermal gas has augmented the capacity in electricity production. In early 2010, however, the country experienced an unprecedented electricity production shortfall (April–May) causing great embarrassment to both residents and businesses. It is therefore expedient to establish a strong link between economic activity and the electricity sector to know whether or not shortages will have impacts on economic growth and, if so, identify the causality. The aim of this paper is twofold: firstly, we have to investigate the long-term relationship between electricity consumption and economic growth and secondly, the causal impact of electricity and growth will be tested using Granger causality tests. This is to establish whether long-term electricity consumption per capita goes with the GDP per capita and determine the causality between them. The empirical analysis of causality is carried out in a vector error correction model after stationary and cointegration relationship testing. In terms of causality, three types of results may occur. The first may be a no causality relationship between energy consumption and the extent of economic growth. It refers to the neutrality hypothesis, which implies that energy policy is not correlated with the GDP and vice versa (Akarca and Long, 1980). In this case, an apparent inconsistency between global and energy policies may not create excessive distortions. The second may be the unidirectional causality either from economic growth to energy sector (GE) or from the energy sector to economic growth (EG). If the result shows a unidirectional causality of type GE, this means that the economy is less dependent on energy and energy policy has no effect on growth. If the unidirectional causality of type EG appears, then shortfalls or conservation of electricity power will have impacts in terms of go-slow in economic activity and conversely, an increase in the use of energy involve positive impact on economic growth. In the latter perspective, energy plays an important direct and indirect role in economic growth by acting as a complement of labor and capital factors. Finally, the causality may be bidirectional between energy and growth yielding the feedback hypothesis. This result implies that both energy consumption and economic growth are jointly determined. The remaining part of this document emphasizes a review of the relevant empirical literature in section 2 and describes the electricity sector and economic activities in Cote d'Ivoire in section 3. Section 4 introduces the methodological framework while section 5 displays the econometric results. Policy implications and conclusions are outlined in section 6.