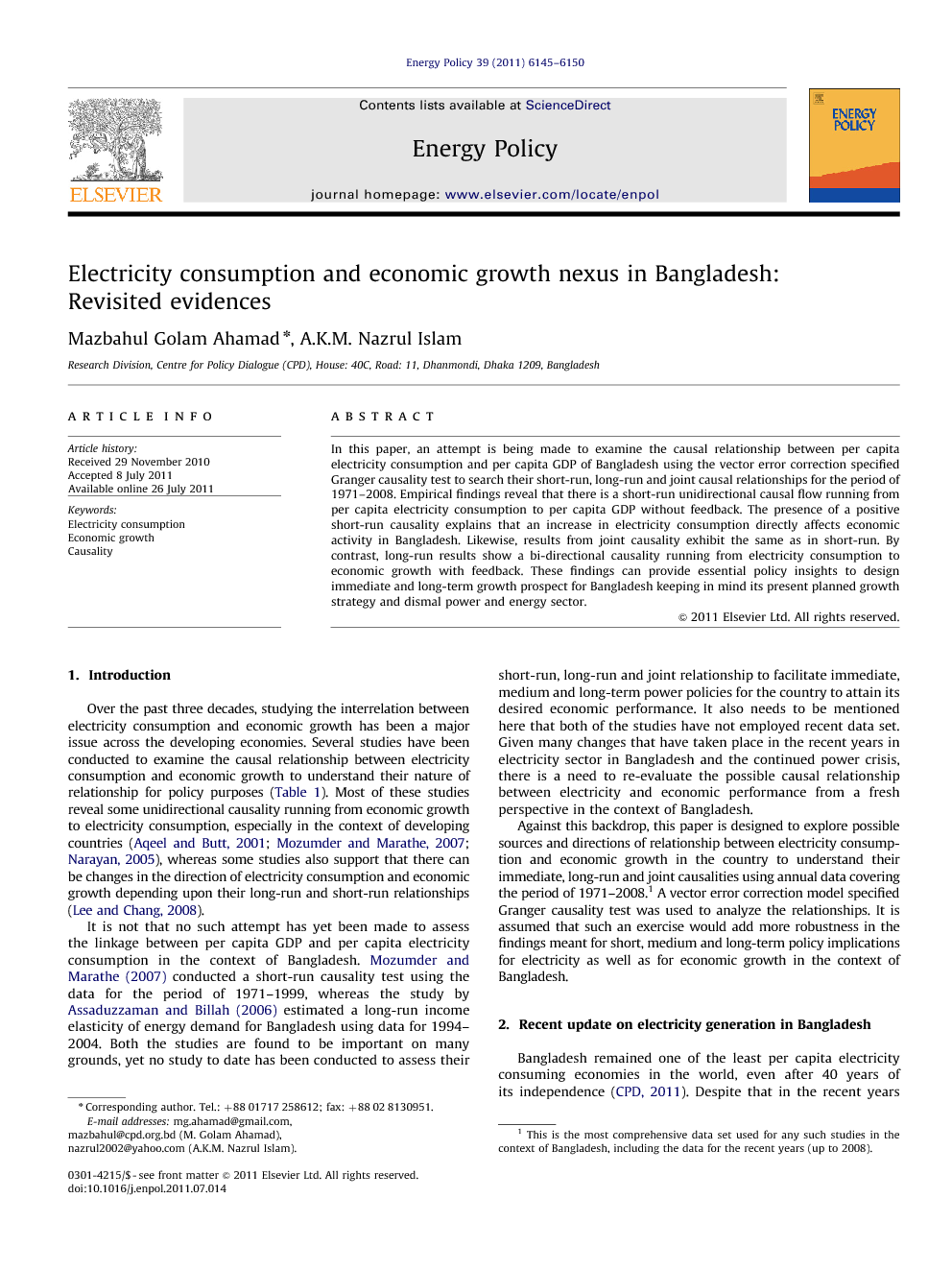 This study has been conducted to assess the causal relationship between per capita electricity consumption and per capita GDP of Bangladesh covering the period 1971–2008, keeping in mind immediate, mid-term and long-term policy implications concerning electricity generation, distribution and management in one hand and to accelerate per capita GDP on the other. In view of this, the study has employed necessary econometric techniques such as unit root test, cointegration test and a step by step analysis of vector error correction specified Granger causality test to understand the source and direction of the possible causal relationship between electricity consumption and GDP for Bangladesh. Results from the cointegration test establish the existence of a cointegrating (long-run equilibrium) relationship between the series, while the causality results exhibit some robust evidences of positive and unidirectional short-run and joint causal relationships running from per capita electricity consumption to per capita GDP. Similarly, the results also substantiate a bi-directional causal relationship between the two variables in the long run. The findings lay emphasis on electricity consumption as a pre-requisite of achieving higher GDP growth, both in short and medium term perspectives for Bangladesh. This implies that priority should be given to electricity generation, distribution and management in the short and medium term policies of the government to achieve higher per capita GDP for the economy. Taking into cognizance this fact the recent emphasis on establishing rental, quick rental and peaking power plants by the government across the country to improve the power situation within the shortest possible time can be considered as a positive step to accelerate country's economic performance, provided such initiatives are cost-effective and do not necessarily require subsidy measure, as such a step may cut down government's budgetary allocations for other productive sectors and jeopardize the overall macroeconomic stability in the economy. Contrary to the short and medium term results, higher access to electricity and high per capita GDP are likely to influence each other, which in turn suggests investing on strengthening electricity supply in the country as well as on those factors, which influence GDP growth in the long run. In view of the above findings it is recommended that generation of electricity should be given due priority in the short and medium term policies for the economy of Bangladesh to achieve higher per capita GDP, while GDP may also take care of achieving higher electricity consumption in the long run. Therefore rationalization of power tariff, minimization of system loss and demand side management need to be given due priority in immediate and mid-term policies of the government, besides ensuring higher electricity generation in the economy. In view of the importance of accessing electricity for accelerating per capita GDP in short and mid-run, higher investment in power can be suggested. However, it can also be opined that Bangladesh could pursue power generation from other non-conventional sources such as solar, hydro and wind power in the short run despite that such initiatives may turn out to be little more costly in the short run. On the other hand, there is a need to provide favorable fiscal incentives and also encourage private entrepreneurs in developing power sector in Bangladesh in the long-run along with other growth influencing factors. But given the weak electricity situation in Bangladesh and her desire to become a middle income country, which is envisaged in Vision 2021, she needs to pursue a policy of establishing power plants, which will be cost-effective in the long run, possibly using the vast local coal resource, which at present occupies only an insignificant part of the fuel needs for her power generation.