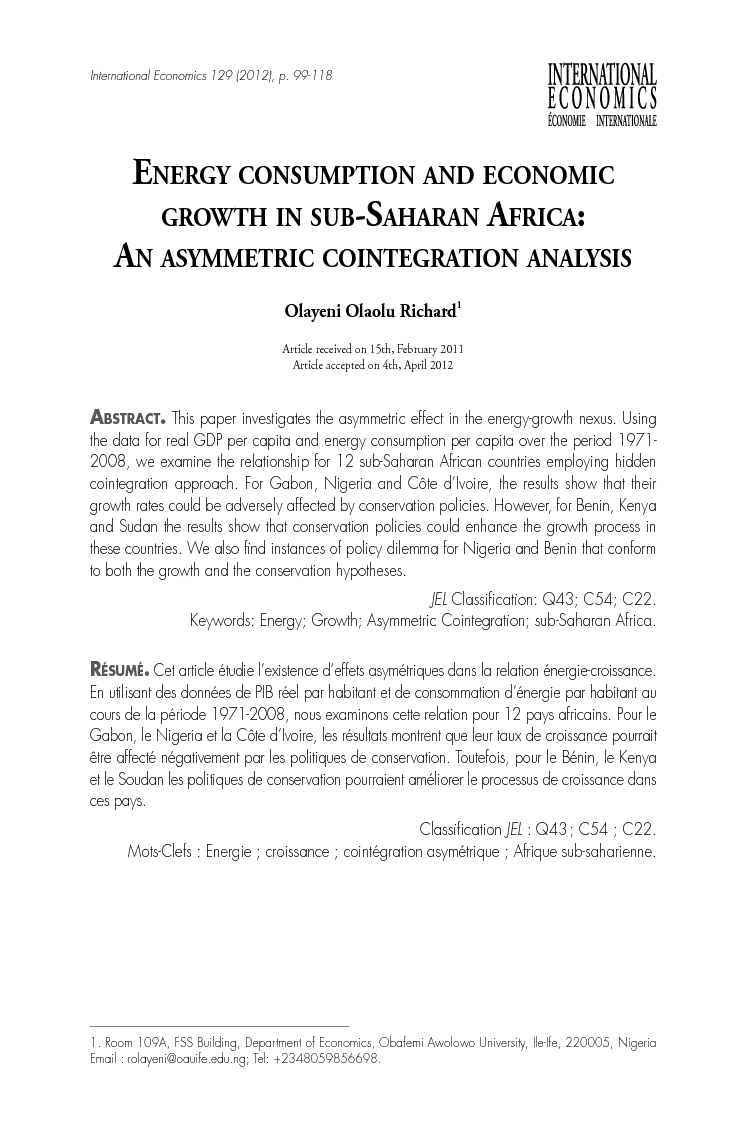 This paper investigates the asymmetric effect in the energy-growth nexus. Using the data for real GDP per capita and energy consumption per capita over the period 1971-2008, we examine the relationship for 12 sub-Saharan African countries employing hidden cointegration approach. For Gabon, Nigeria and Côte d'Ivoire, the results show that their growth rates could be adversely affected by conservation policies. However, for Benin, Kenya and Sudan the results show that conservation policies could enhance the growth process in these countries. We also find instances of policy dilemma for Nigeria and Benin that conform to both the growth and the conservation hypotheses.

The core of research on energy consumption and economic growth in the last two decades has focused on the existence and the direction of causality between the two series. Not surprisingly, this research reflects the issues in an ongoing debate on whether energy consumption can be reduced without adversely affecting the growth process. Hence, investigating the causality and cointegration properties is a legitimate research issue. The call for reduction in energy consumption in the first instance is a consequence of the need to mitigate the amount of pollution and global warming as well as enhancing energy efficiency. Consequently, a number of authors have studied this relationship. Starting with the pioneering work of Kraft and Kraft (1978), the list of authors includes Yang (2000), Stern (2000), Asafu-Adjaye (2000), Soytas and Sari (2003), Jumbe (2004), Shiu and Lam (2004), Yoo (2006), Mozumbder and Marathe (2007), Chontanawat et al., (2008), Akinlo (2008), Wolde-Rufael (2005, 2009, 2010) and Tsani (2010). This paper contributes to the literature by examining cointegration between energy consumption and economic growth for some sub-Saharan African countries bearing in mind that this relationship may be subject to nonlinearity. Previous studies examined this relationship either for some selected sub-Saharan African countries (see, for example, Wolde-Rufael, 2005, 2009; Akinlo, 2008) or for some individual countries (see, for example, Jumbe, 2004) assuming a linear cointegration between the variables. If it is true that the data-generating process underlying this relationship is nonlinear, the models that these authors used are clearly misspecified and the conclusions that they inferred may not be correct. The present study emphasizes the exigency of looking more closely at the question of cointegration between economic growth and energy consumption in the context of asymmetrically cointegrating relationship. The vehicular method to studying this phenomenon is the hidden cointegration approach developed in Granger and Yoon (2002) and in Schorderet (2004). The position of these papers is that although any two series may not be linearly cointegrated, there is still the possibility of asymmetric cointegration between them. The upshot is that there may be hidden dynamics in an otherwise non-cointegrating relationship that drives the components – positive or negative – of the series rather than the series themselves. For sub-Saharan African countries, the issue of energy consumption or conservation is an interesting one since promoting growth necessarily requires intensifying energy use. Yet, only a very tiny body of literature exists on the nexus between energy use and economic growth in Africa. It is submitted however that this body of literature is growing. Existing literature characterizes the relationship for (sub-Saharan) African countries by testing for the Granger non-causality and estimating the cointegrating vectors between energy consumption and economic growth (Wolde-Rufael, 2005, 2009; Akinlo, 2008). A noticeable finding in these studies as in the studies for other economies is conflicting evidence on the causal relation, where causality may run from economic growth to energy consumption for a particular country but run from energy consumption to economic growth for another. Also with respect to cointegration issue, conflicting evidence is extant. For some economies, evidence shows no cointegration between these variables whereas for others cointegration is confirmed. Wolde-Rufael (2009) attempts to fill this gap by expanding the bivariate VAR model to a four-variable VAR model augmented with labour force and capital as control variables omitted from his earlier study. In the same vein, Akinlo (2008) includes government expenditure and price index as control variables in addition to energy consumption and economic growth. Of course, as argued by Lütkepohl (1982), omission of relevant variables will have implications for causal evidence. Furthermore, the Toda-Yamamoto (1995) procedure employed by Wolde-Rufael (2005, 2009) glosses over the importance of nonlinear cointegration by deliberately and completely avoiding its treatment. Yet, a lot of information is still pending on the question of asymmetric response among cointegrated and non-cointegrated variables. The Pesaran-Shin-Smith (2001) autoregressive distributed lag (ARDL) bound test used by Akinlo (2008) is likewise inclined to avoid testing for cointegration. The importance of nonlinear cointegration in the relationship between energy consumption and economic growth is borne out by the cost of inventory keeping and by market friction and adjustment costs. When economic activity lulls energy consumption will fall due to stifling aggregate demand. However in booms, when firms really need more energy to support the expanding demand, inadequate inventory of energy will slow down the adjustment. Moreover, the delivery time could be proportionate to the length of time the economy has slipped into recession because energy suppliers cannot be immune to the downturn particularly if it is global. Considerations such as these can vitiate any linear cointegrating relationship between energy consumption and economic activity. When data are truly generated by nonlinear cointegration processes, most of the conclusions based on the linear approach will be reversed. Thus, we need a more general and more forgiving approach than the ones currently used such as in the studies mentioned above. The rest of this paper is organized as follows. Section 2 discusses the method of hidden cointegration, sources of data and measurement of variables. Section 3 discusses the results and also presents the Monte Carlo results for small sample bias and the acceptance rate of hidden cointegration, while Section 4 concludes with some recommendations.

The objective of this paper is premised on the hypothesis that there may be asymmetric effect between economic growth and energy use, resulting from the cost of inventory keeping, market friction and adjustment costs. These factors could vitiate any linear treatment of the relationship between the two variables. For this purpose, the recently developed hidden cointegration technique came in handy. This technique naturally allows a straightforward delimitation of the data in an economically sensible way: the negative component of energy consumption carries the notion of energy conservation, while the positive component carries the notion of energy utilization. In the same way, the negative component of GDP captures recessions or output contraction while the positive component captures booms or output expansion. Using this classification, we tested for the existence of hidden cointegration for each of the 12 countries. Gabon, Nigeria and Côte d'Ivoire conform to the growth hypothesis, suggesting that their growth could be adversely affected by conservation policies. On the other hand, Benin, Kenya and Sudan conform to the conservation hypothesis, indicating that conservation policies could enhance the growth process in these countries. We find that while intensifying energy use in Cameroon, Côte d'Ivoire, Kenya and Senegal could induce output contraction, it could induce output expansion in Gabon, Ghana and Togo. Lack of hidden cointegration between growth and energy use confirms the neutrality hypothesis for Zambia. We also find instances of policy dilemma for Nigeria and Benin that conform to both the growth and the conservation hypotheses. The Monte Carlo experiment showed that indeed the hidden cointegration analysis employed might well have dectected the presence of hidden cointegration despite the small sample size used. Finally, the new evidence suggests that lack of cointegration and hence stable relationship between energy consumption and economic growth found in previous studies for some of these countries may be due to failure to properly delimit the nonlinearity property in the data.