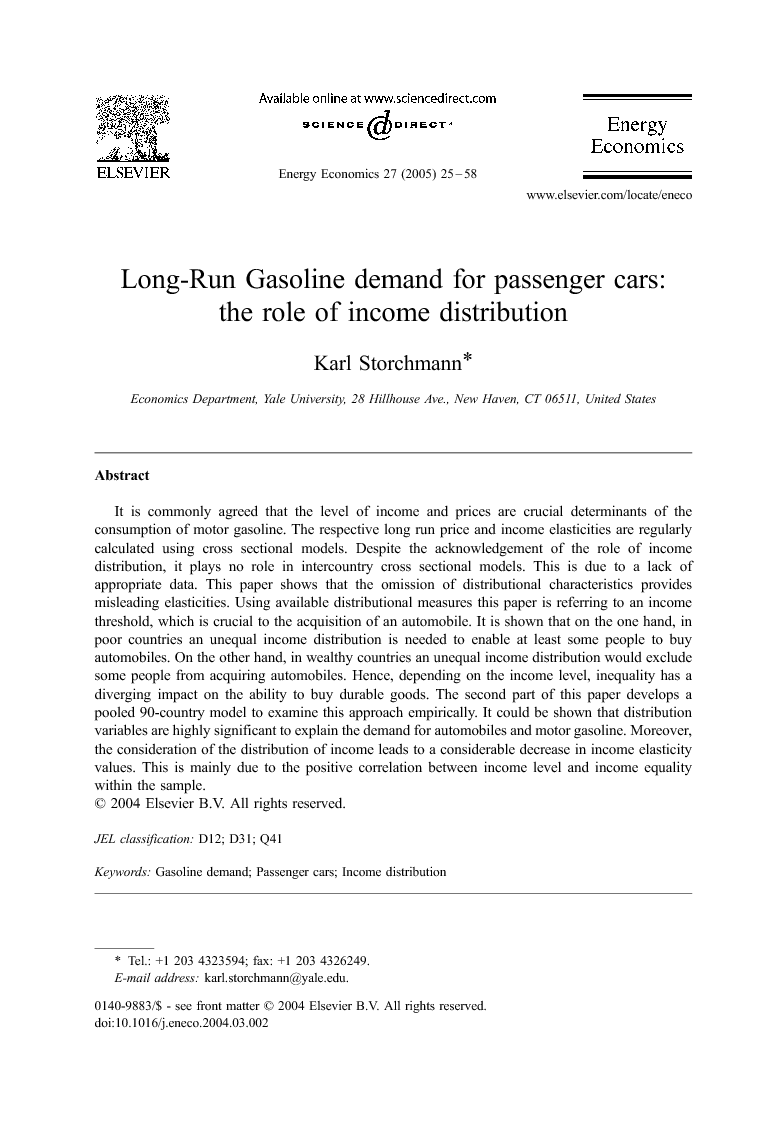 It is commonly agreed that the level of income and prices are crucial determinants of the consumption of motor gasoline. The respective long run price and income elasticities are regularly calculated using cross sectional models. Despite the acknowledgement of the role of income distribution, it plays no role in intercountry cross sectional models. This is due to a lack of appropriate data. This paper shows that the omission of distributional characteristics provides misleading elasticities. Using available distributional measures this paper is referring to an income threshold, which is crucial to the acquisition of an automobile. It is shown that on the one hand, in poor countries an unequal income distribution is needed to enable at least some people to buy automobiles. On the other hand, in wealthy countries an unequal income distribution would exclude some people from acquiring automobiles. Hence, depending on the income level, inequality has a diverging impact on the ability to buy durable goods. The second part of this paper develops a pooled 90-country model to examine this approach empirically. It could be shown that distribution variables are highly significant to explain the demand for automobiles and motor gasoline. Moreover, the consideration of the distribution of income leads to a considerable decrease in income elasticity values. This is mainly due to the positive correlation between income level and income equality within the sample.

Since the first oil price crisis in the early 1970s, energy consumption and its determinants have received a wave of attention. A lot of studies have been carried out in order to quantify price and income elasticities of oil demand. Since the segment “passenger cars” is not only the largest consumer of oil products, but also has the highest growth rates,1 most of those studies focus on the demand for motor gasoline for automobiles. The long-term elasticity with respect to gasoline prices and income is of paramount interest. Whereas 30 years ago scientific research was fueled mainly by the threat of energy scarcity, nowadays environmental problems like the potential global warming change are becoming increasingly important. Most of the models developed in the early 1970s were one-equation models, estimating the fuel consumption simply in dependence on gasoline prices, disposable income, and gasoline consumption in the previous period (e.g., Houthakker et al., 1974). Some studies also included variables such as railway prices or population density (e.g., Ramsey et al., 1975). In contrast to these studies, Nordhaus (1977) applied a complex dynamic approach in order to evaluate elasticities of sectoral energy demand. According to the household production approach he deemed energy demand as a derived rather than a final demand. Sweeney (1978) followed this approach and developed a decomposed vintage model of gasoline consumption for the U.S., taking the capital stock into account. This allows for differential adjustment speeds associated with changes in the character of the capital stock and its utilization. Due to the turn over time in the capital stock, long run elasticities were found to be significantly higher than short run elasticities. Pindyck (1979) applied this approach in a pooled cross section time series model for 16 countries including a subsample of a few developing countries. As pointed out by many authors (e.g., Griffin and Gregory, 1976, Nordhaus, 1977, Drollas, 1984 and Baltagi and Griffin, 1984), cross sectional data show much less multicollinearity than do time series data. Furthermore, cross sectional data are characterized by wide intercountry differences of consumption patterns and prices, which tend to be the result of long-standing national tariff, tax and subsidy policies. That makes cross sectional and pooled models, respectively, particularly appropriate to reflect long-term rather then short-term elasticities. For 11 OECD countries Pindyck (1979) calculated a long-term price elasticity of −1.31 and an income elasticity of 0.84. In contrast, a decomposed static cross sectional model by Wheaton (1982) for a sample of 25 industrialized countries showed virtually an inverse relation of the elasticity values: Whereas the income elasticity lies with 1.26 above unity, the price elasticity is only −0.74 (see Table 1). Similar results were found by Nordhaus (1977): In a pooled model encompassing six OECD countries, he calculated an income elasticity of 1.34 and a price elasticity of −0.36 for the entire transportation sector. Recently, a comprehensive dynamic panel study covering 12 OECD countries and 20 years was undertaken by Johansson and Schipper (1997). The model is decomposed and refers also to geographic variables such as population density. The results resemble those of Wheaton with income elasticity being above and price elasticity below unity.