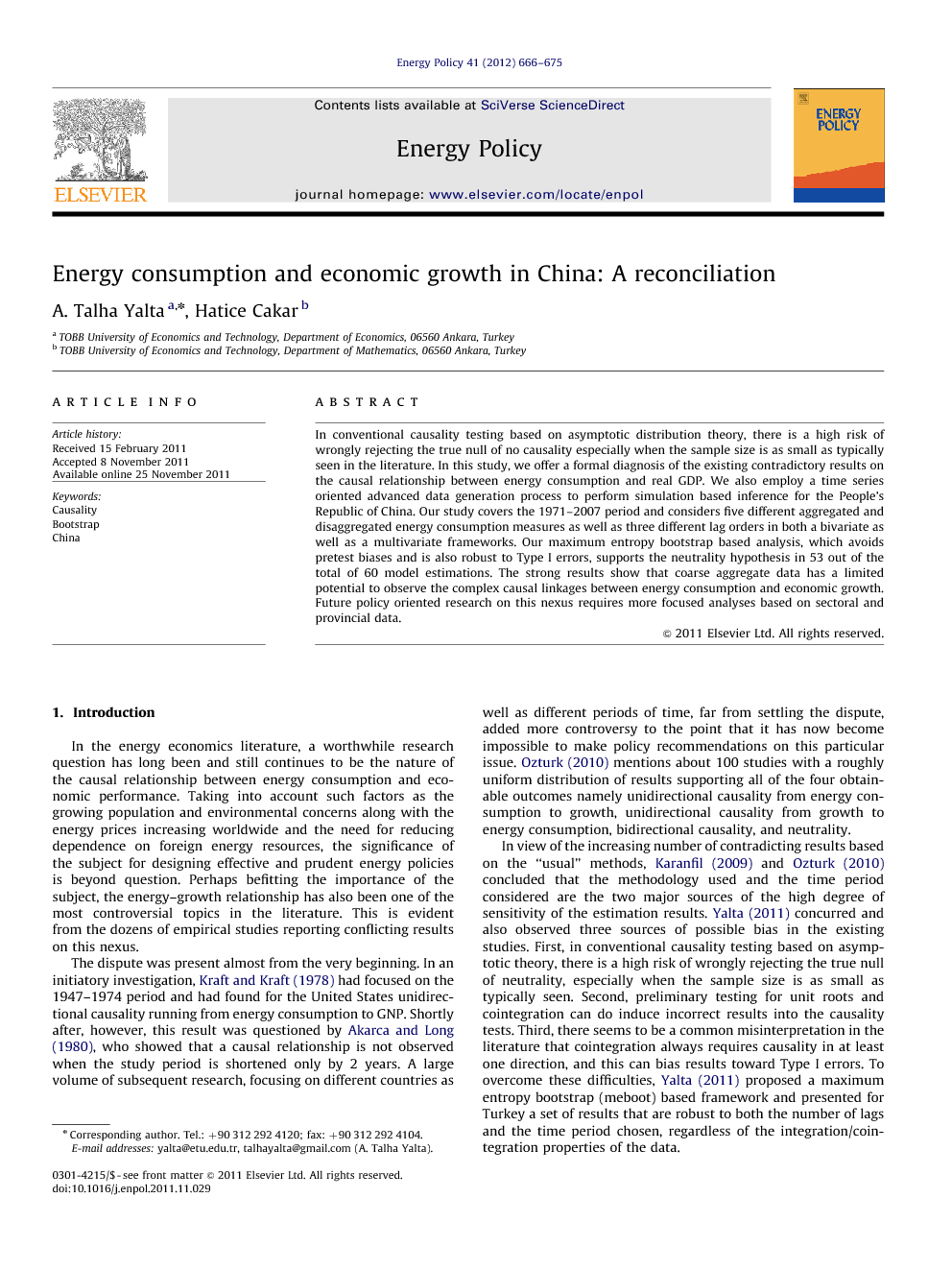 In conventional causality testing based on asymptotic distribution theory, there is a high risk of wrongly rejecting the true null of no causality especially when the sample size is as small as typically seen in the literature. In this study, we offer a formal diagnosis of the existing contradictory results on the causal relationship between energy consumption and real GDP. We also employ a time series oriented advanced data generation process to perform simulation based inference for the People's Republic of China. Our study covers the 1971–2007 period and considers five different aggregated and disaggregated energy consumption measures as well as three different lag orders in both a bivariate as well as a multivariate frameworks. Our maximum entropy bootstrap based analysis, which avoids pretest biases and is also robust to Type I errors, supports the neutrality hypothesis in 53 out of the total of 60 model estimations. The strong results show that coarse aggregate data has a limited potential to observe the complex causal linkages between energy consumption and economic growth. Future policy oriented research on this nexus requires more focused analyses based on sectoral and provincial data.

In the energy economics literature, a worthwhile research question has long been and still continues to be the nature of the causal relationship between energy consumption and economic performance. Taking into account such factors as the growing population and environmental concerns along with the energy prices increasing worldwide and the need for reducing dependence on foreign energy resources, the significance of the subject for designing effective and prudent energy policies is beyond question. Perhaps befitting the importance of the subject, the energy–growth relationship has also been one of the most controversial topics in the literature. This is evident from the dozens of empirical studies reporting conflicting results on this nexus. The dispute was present almost from the very beginning. In an initiatory investigation, Kraft and Kraft (1978) had focused on the 1947–1974 period and had found for the United States unidirectional causality running from energy consumption to GNP. Shortly after, however, this result was questioned by Akarca and Long (1980), who showed that a causal relationship is not observed when the study period is shortened only by 2 years. A large volume of subsequent research, focusing on different countries as well as different periods of time, far from settling the dispute, added more controversy to the point that it has now become impossible to make policy recommendations on this particular issue. Ozturk (2010) mentions about 100 studies with a roughly uniform distribution of results supporting all of the four obtainable outcomes namely unidirectional causality from energy consumption to growth, unidirectional causality from growth to energy consumption, bidirectional causality, and neutrality. In view of the increasing number of contradicting results based on the “usual” methods, Karanfil (2009) and Ozturk (2010) concluded that the methodology used and the time period considered are the two major sources of the high degree of sensitivity of the estimation results. Yalta (2011) concurred and also observed three sources of possible bias in the existing studies. First, in conventional causality testing based on asymptotic theory, there is a high risk of wrongly rejecting the true null of neutrality, especially when the sample size is as small as typically seen. Second, preliminary testing for unit roots and cointegration can do induce incorrect results into the causality tests. Third, there seems to be a common misinterpretation in the literature that cointegration always requires causality in at least one direction, and this can bias results toward Type I errors. To overcome these difficulties, Yalta (2011) proposed a maximum entropy bootstrap (meboot) based framework and presented for Turkey a set of results that are robust to both the number of lags and the time period chosen, regardless of the integration/cointegration properties of the data. Our main objective in this paper is to highlight the importance of robustness issues of econometric estimates in policy studies. Also, we propose an appropriate method to obtain consistent findings on the energy consumption and gross domestic product (GDP) nexus. Finally, we perform rigorous analysis that can put the aforementioned observations to test and provide conclusive results for the People's Republic of China. Our approach is based on the meboot data generation process (DGP), which allows reliable bootstrap inference for nonstationary time series showing high levels of state dependency. The analysis considers five different aggregated and disaggregated energy consumption measures as well as three different lag orders in both a bivariate as well as a multivariate frameworks. The scope of our analysis, which involves running millions of regressions and estimating 60 different models using different parameters and specifications, is unparalleled in the energy economics literature. Conducting this study for China is particularly useful for three reasons. First, China is the most populous and the second largest economy in the world (International Monetary Fund, 2010) with continuously increasing energy needs that cause a significant impact in energy prices and make the country a key player in the world energy markets. Second, China is the world's largest emitter of greenhouse gases (GHGs), which leads to important environmental concerns, and also brings forth the question of whether sustainable growth can be achieved with energy conservation policies. Third, there exists a relatively large number of conflicting results for China on the energy consumption and GDP nexus, which points out the need for conclusive results that can be guiding for future research as well as energy policy directions. The rest of the paper is organized as follows: in the next section, we provide a brief overview of China's energy issues and the various findings of the earlier studies on the energy–growth nexus in China. Section 3 includes our discussion of the methodology, explanation of the data, and the presentation of the empirical results for both the bivariate and the multivariate analyses. This is followed by a review of the policy implications of the empirical results. Section 5 concludes.

Looking at the existing studies on the energy consumption and GDP nexus in the People's Republic of China, it is eye catching that the various findings show great variability with respect to the energy consumption definition used, the methodology employed, and the time period considered. It also stands out that the techniques applied in the previous studies are based on asymptotic testing of the null of non-causality using small samples, typically with number of observations less than 50. It is long known that such tests can exhibit serious size distortions, and that the bootstrap technique can provide huge improvements upon the approximations of asymptotic theory. Meboot is the newest and one of the most advanced bootstrap DGPs, which is specifically designed for use under myriad forms of nonstationarity. It can be used in most real world applications where the stationarity assumptions are difficult to verify with certainty. Meboot allows robust and reliable statistical inference even under the limited number of observations problem, which is especially often seen in the energy economics literature. In this study, we utilized a meboot DGP based VAR framework with the goal of performing rigorous analysis that can provide conclusive evidence regarding the energy consumption and GDP nexus in China. Our analysis involved five different aggregated and disaggregated energy consumption measures, three different lag orders, and both bivariate as well as multivariate specifications. Out of the total of 60 models that we have considered, only 7 show a causal relationship and none of these models are the preferred ones according to multiple model selection criteria. In particular, in the multivariate analysis, 0 out of 30 models show a causal relationship between energy consumption and GDP in China. These findings also agree with the multi-period analysis for Turkey by Yalta (2011). Our results strongly support Karanfil (2009) and Ozturk (2010), who show that employing the usual methods with the same aggregate variables with a small set of observations has over time resulted in a large number of studies with contradictory conclusions on the energy–growth relationship. This study offers a formal diagnosis of the situation and proposes an appropriate method to obtain robust findings supporting the neutrality hypothesis for China at the aggregate level. This, of course, does not mean that energy consumption and GDP are not interrelated. Rather, it implies that coarse aggregate data, which yield contradicting results with asymptotic testing in small samples, has a limited potential to observe the complex causal linkages between energy consumption and income. Therefore, future policy oriented studies on this nexus should employ more focused and detailed analyses utilizing state of the art econometric methods, and using sectoral and provincial data closely related to the specific question being tackled. Such approach can provide the robust and reliable answers that the policy makers can benefit from.