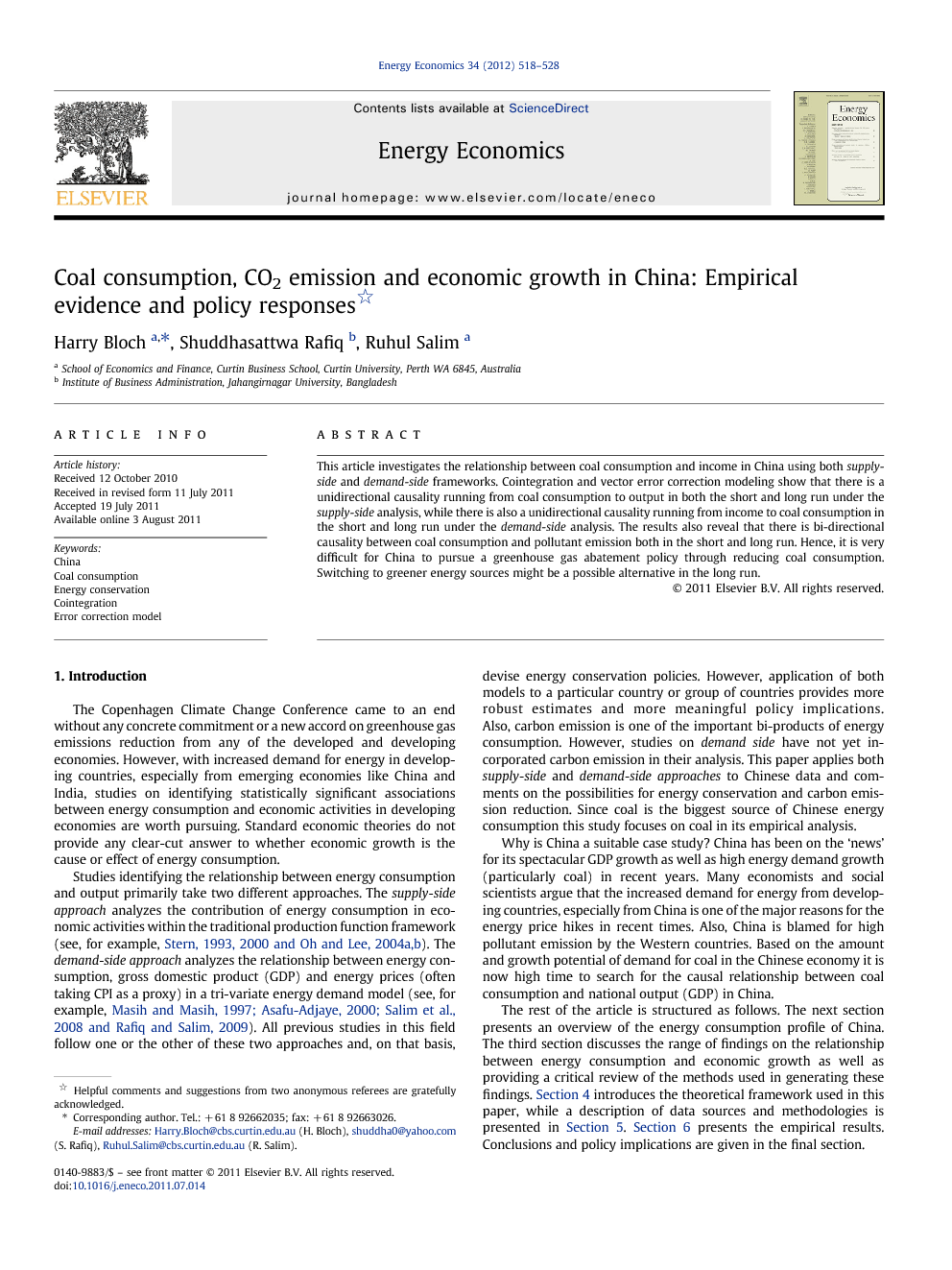 The Copenhagen Climate Change Conference came to an end without any concrete commitment or a new accord on greenhouse gas emissions reduction from any of the developed and developing economies. However, with increased demand for energy in developing countries, especially from emerging economies like China and India, studies on identifying statistically significant associations between energy consumption and economic activities in developing economies are worth pursuing. Standard economic theories do not provide any clear-cut answer to whether economic growth is the cause or effect of energy consumption. Studies identifying the relationship between energy consumption and output primarily take two different approaches. The supply-side approach analyzes the contribution of energy consumption in economic activities within the traditional production function framework (see, for example, Stern, 1993, Stern, 2000, Oh and Lee, 2004a and Oh and Lee, 2004b). The demand-side approach analyzes the relationship between energy consumption, gross domestic product (GDP) and energy prices (often taking CPI as a proxy) in a tri-variate energy demand model (see, for example, Masih and Masih, 1997, Asafu-Adjaye, 2000, Salim et al., 2008 and Rafiq and Salim, 2009). All previous studies in this field follow one or the other of these two approaches and, on that basis, devise energy conservation policies. However, application of both models to a particular country or group of countries provides more robust estimates and more meaningful policy implications. Also, carbon emission is one of the important bi-products of energy consumption. However, studies on demand side have not yet incorporated carbon emission in their analysis. This paper applies both supply-side and demand-side approaches to Chinese data and comments on the possibilities for energy conservation and carbon emission reduction. Since coal is the biggest source of Chinese energy consumption this study focuses on coal in its empirical analysis. Why is China a suitable case study? China has been on the ‘news’ for its spectacular GDP growth as well as high energy demand growth (particularly coal) in recent years. Many economists and social scientists argue that the increased demand for energy from developing countries, especially from China is one of the major reasons for the energy price hikes in recent times. Also, China is blamed for high pollutant emission by the Western countries. Based on the amount and growth potential of demand for coal in the Chinese economy it is now high time to search for the causal relationship between coal consumption and national output (GDP) in China. The rest of the article is structured as follows. The next section presents an overview of the energy consumption profile of China. The third section discusses the range of findings on the relationship between energy consumption and economic growth as well as providing a critical review of the methods used in generating these findings. Section 4 introduces the theoretical framework used in this paper, while a description of data sources and methodologies is presented in Section 5. Section 6 presents the empirical results. Conclusions and policy implications are given in the final section.

This paper investigates the relationship between coal consumption and GDP in China using both a supply-side and a demand-side framework. The error correction mechanism (ECM) is used to examine both short-run and long-run Granger causality. Furthermore, generalized variance decompositions and impulse response functions are employed to confirm the robustness of the causality tests. The empirical results show that there is a unidirectional causality running from coal consumption to GDP in the short- and long-run under the supply side analysis, where GDP is interpreted as a measure of aggregate output in China. The result is confirmed in the impulse response function that shows positive and persistent impact on GDP growth from shocks to oil consumption growth, with these shocks accounting for about half of variance in GDP growth in the long run according to the variance decomposition. If we consider the findings of all the tests for the two demand-side equations, they show there is a short- and long-run bi-directional causality between coal consumption and GDP, where GDP is interpreted as a measure of aggregate income. Thus, it is very difficult for China to conserve coal without adversely affecting national income. Moreover, the demand-side model indicates that there is a very strong link between carbon emissions and coal consumption, with the findings that there is a bi-directional causality between the variables. This finding gives support to the increasing concern of the global community regarding the detrimental effect of coal consumption toward the overall climatic degradation. On a more hopeful note, the results show that coal prices Granger cause coal consumption, so a reduction in pollution without restricting economic growth may be possible by withdrawing the current policy of coal subsidization by the Chinese Government and replacing it with a policy of subsidizing greener energy sources.