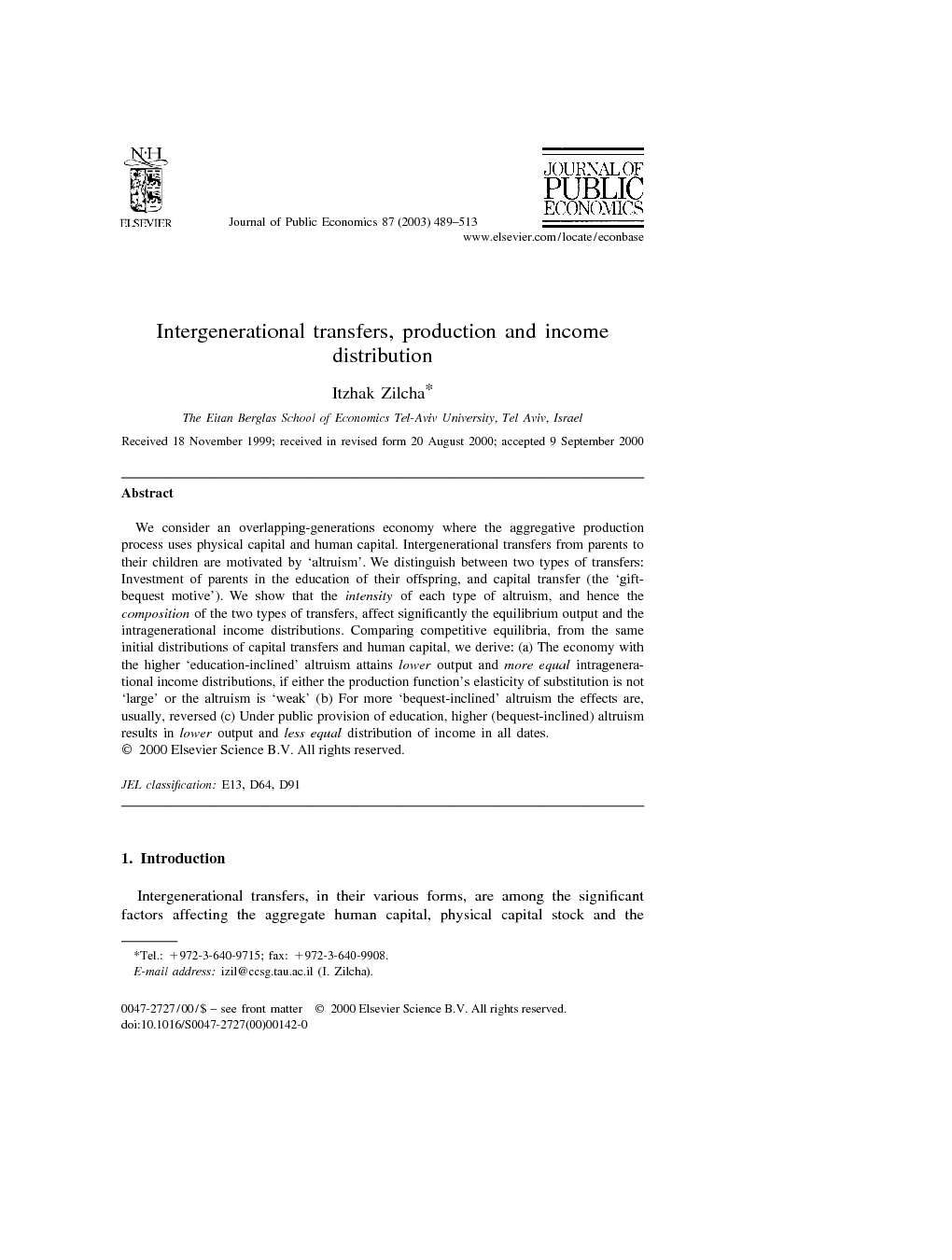 We consider an overlapping-generations economy where the aggregative production process uses physical capital and human capital. Intergenerational transfers from parents to their children are motivated by ‘altruism’. We distinguish between two types of transfers: Investment of parents in the education of their offspring, and capital transfer (the ‘gift-bequest motive’). We show that the intensity of each type of altruism, and hence the composition of the two types of transfers, affect significantly the equilibrium output and the intragenerational income distributions. Comparing competitive equilibria, from the same initial distributions of capital transfers and human capital, we derive: (a) The economy with the higher ‘education-inclined’ altruism attains lower output and more equal intragenerational income distributions, if either the production function’s elasticity of substitution is not ‘large’ or the altruism is ‘weak’ (b) For more ‘bequest-inclined’ altruism the effects are, usually, reversed (c) Under public provision of education, higher (bequest-inclined) altruism results in lower output and less equal distribution of income in all dates.

Intergenerational transfers, in their various forms, are among the significant factors affecting the aggregate human capital, physical capital stock and the inequality in the distribution of income. In recent years economists studied extensively various types of endogenous growth models where human capital is assumed to be the engine for growth. The issues we consider here are related to the following two presumptions which are supported by empirical evidence: 1. Intergenerational transfers in the form of human capital and physical capital affect significantly intragenerational income distribution and capital accumulation. 2. These transfers are motivated mainly by some sort of ‘altruism’ between parents and children. Should we distinguish between countries (or societies) where parental transfers to children consists mainly of investments in education and countries where parental transfers are biased towards physical capital? How does the ‘mixture’ of these two types of intergenerational transfers affect income inequality and output? The coexistence of these two types of transfers has received little attention in the literature (see, for example, Becker and Tomes, 1986 and Lord and Rangazas, 1991. An extensive survey is brought in Laitner, 1997). Evidence regarding significant differences in investments in education between countries has been documented in recent years (among the OECD countries see: Education at Glance: OECD Indicators, 1997 for other countries see: World Development Indicators, 2000). It is our main aim to demonstrate the economic importance of the ‘composition’ of these two different types of intergenerational transfers. Differences between societies (and, hence, economies) emanate from cultural and traditional gaps as well as the nature of the ‘altruism’ of parents towards their children. We assume that, (a) The investment of parents in education of their child emanates from their preference for a ‘more educated’ offspring, and also to affect this way her future earning capability (we call it ‘education-inclined altruism’). (b) All sorts of physical capital transfers are motivated by the ‘joy of giving’ and/or the ‘gift-bequest motive’ ( we call it ‘bequest-inclined altruism’). The utility derived by parents from each kind of transfer is assumed to exist but the intensity (of the preferences) towards each transfer may differ between economies. Thus, in comparing economies, which differ only in the intensity of each type of altruism, we shall study the following questions: • When parental transfers to children have larger bias towards education does it imply more equal intragenerational income distributions? higher output? • Do the answers to the above questions depend on the education provision regime? Namely, is the private provision of education case different significantly from the public provision case? In an OLG model we compare competitive equilibria of two economies, starting from some initial distributions of human capital and intergenerational transfers, which differ only in the ‘composition’ of transfers (due to different utility functions). Let σ be the aggregate production function’s elasticity of substitution. We obtain that under private provision of education, if either σ is not ‘much larger than 1’, or the preference for human capital of the offspring is ‘strong’ then: A more (education-inclined) altruistic economy attains lower output, but more equal intragenerational income distribution. However, when we consider higher bequest-inclined altruism the direction reverses in some circumstances: For example, when σ assumes ‘low’ values more altruism imply higher output and less equal income distribution in each date. Thus, in comparing income distributions in various countries we should also pay attention to the mode in which transfers from parents to children are carried out: Is it more in the form of enhancing human capital formation or is it mostly transfers of some sorts of capital. Consider the case where education is provided by the government, financed by taxing the wage-income, and the provision is equal to all ‘young’ individuals (i.e., independent of ability and wealth of parents). It is shown that, regardless of the above-mentioned parameters, higher bequest-inclined altruism results in (a) higher output, and (b) less equal income distributions, in all dates. Thus, under public provision of education more altruism results in a significantly different economic consequences compared to the private provision case.

The attempts to explain the persistent differences in economic development between countries, using new models of growth, were concentrated on the technological aspects and the endogenous human capital accumulation. We claim here that intergenerational transfers, motivated by ‘altruism’ within families, including values and cultural background, and their composition, play an important role. Put it differently, the interactions between generations, which are affected greatly by altruistic considerations, have significant impact on the production activities and inequality in income distributions. However, as was shown in this work, it is important to distinguish between the intensities in which the two types of transfers are carried out: Whether the emphasis is on children’s human capital formation or, perhaps, on direct transfers of wealth from parents to children in various ways. Whether the transfers from parents to their children are mostly some sort of physical capital, or predominantly investments in education and knowledge, have different economic implications. Such comparison between countries (or societies) may explain part of the persistent differences in growth rates and/or income distributions. In this paper we assume a Cobb-Douglas type of utility function in order to derive ‘sharp’ results. Some restriction of the homothetic utility family is essential when we need to aggregate, in a manageable way, over dynasties’ savings, transfers and human capital. Most of our results are robust to some generalization of the Cobb-Douglas preferences. However, we were unable to obtain our results assuming, for example, any homothetic utility function. Since any generalization of the utility function entails more complex proofs we did not proceed this way. In the Becker and Tomes type of altruism, even though transmission of capital from parents to children is based on utility maximization of parents (concerned about their child’s welfare), the composition of transfers is driven by the relative returns on human and physical capital, which depends upon family wealth. In our case, although we take each country’s preferences to be ‘given’, it is the intragenerational income distributions that are affected by the relative rates of return. A modest generalization of our preferences will yield ‘more’ dependence of the composition of transfers on the relative returns. Surprisingly, in our economy, when education is provided equally by the government the impact of higher altruism (the relevant one to this case) is reversed, for most relevant values of the parameters, compared to the private provision case. More altruism reinforces the role played by the initial income dispersion, caused by historical reasons, and hence results in less equality. It seems to us that the ‘mixed’ provision case, i.e., the case where a certain level of education is provided by the government while parents can increase the investment in education, should be examined as well. We claim that in such a case the results obtained in Section 5 will change.