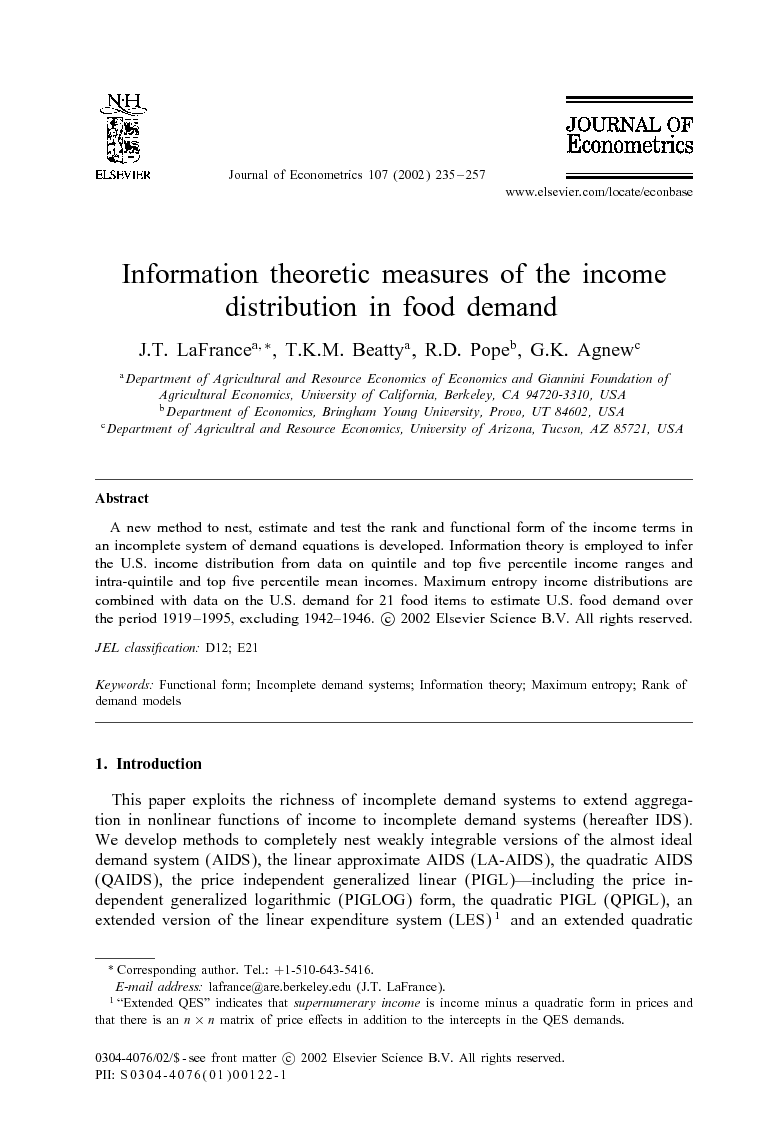 A new method to nest, estimate and test the rank and functional form of the income terms in an incomplete system of demand equations is developed. Information theory is employed to infer the U.S. income distribution from data on quintile and top five percentile income ranges and intra-quintile and top five percentile mean incomes. Maximum entropy income distributions are combined with data on the U.S. demand for 21 food items to estimate U.S. food demand over the period 1919–1995, excluding 1942–1946.

This paper exploits the richness of incomplete demand systems to extend aggregation in nonlinear functions of income to incomplete demand systems (hereafter IDS). We develop methods to completely nest weakly integrable versions of the almost ideal demand system (AIDS), the linear approximate AIDS (LA-AIDS), the quadratic AIDS (QAIDS), the price independent generalized linear (PIGL)—including the price independent generalized logarithmic (PIGLOG) form, the quadratic PIGL (QPIGL), an extended version of the linear expenditure system (LES)1 and an extended quadratic expenditure system (QES). These methods permit us to test for and estimate the rank and functional form of the income terms in aggregable incomplete demand systems. Rank three demand models require at least three summary statistics from the income distribution, e.g., for a QPIGL model in expenditure form we need the cross-sectional means of mh1−κ, mh, and mh1+κ, where mh is the income level of family h,h=1,…,H, say, and κ is the PIGL coefficient on income, while for a QAIDS model we need the means of mh, View the MathML source, and mh[ln(mh)]2. To calculate these means, we need information on the distribution of income. The U.S. Bureau of the Census annually publishes the quintile ranges, intra-quintile means, top five percentile lower bound for income, and the mean income within the top five percentile range for all U.S. families. We use information theory to obtain annual maximum entropy income distributions that satisfy each of the intra-range percentile and conditional mean conditions for the period 1910–1999. These estimates of the income distribution are combined with aggregate annual time series data on per family U.S. food expenditures for 21 individual food items over the period 1919–1995, excluding 1942–1946 to account for the structural impacts of World War II.2 In addition to annual measures of food expenditures, prices, and the income distribution, we incorporate measures for the distribution of the U.S. population by age and the ethnicity of the U.S. population in the IDS specification. The results of the empirical application strongly suggest that a full rank three model is essential, and that all forms of the AIDS–IDS model are rejected in favor of a QPIGL–IDS that is nearly an extended QES. The rest of the paper is organized as follows. The next section extends the aggregation results of Gorman and others to incomplete demand systems that can be written in a PIGL or PIGLOG form. The third section describes the implementation of the maximum entropy procedure to estimate the U.S. income distribution. Section 4 presents a summary and discussion of the empirical results, focusing primarily on the rank of the demand model and the functional form of the income terms. The final section summarizes and concludes. Proofs of our main results and additional discussions and derivations of the modeling approach are contained in an expanded paper (LaFrance, Beatty, Pope and Agnew (2001), hereafter LBPA), which is available from the authors upon request.