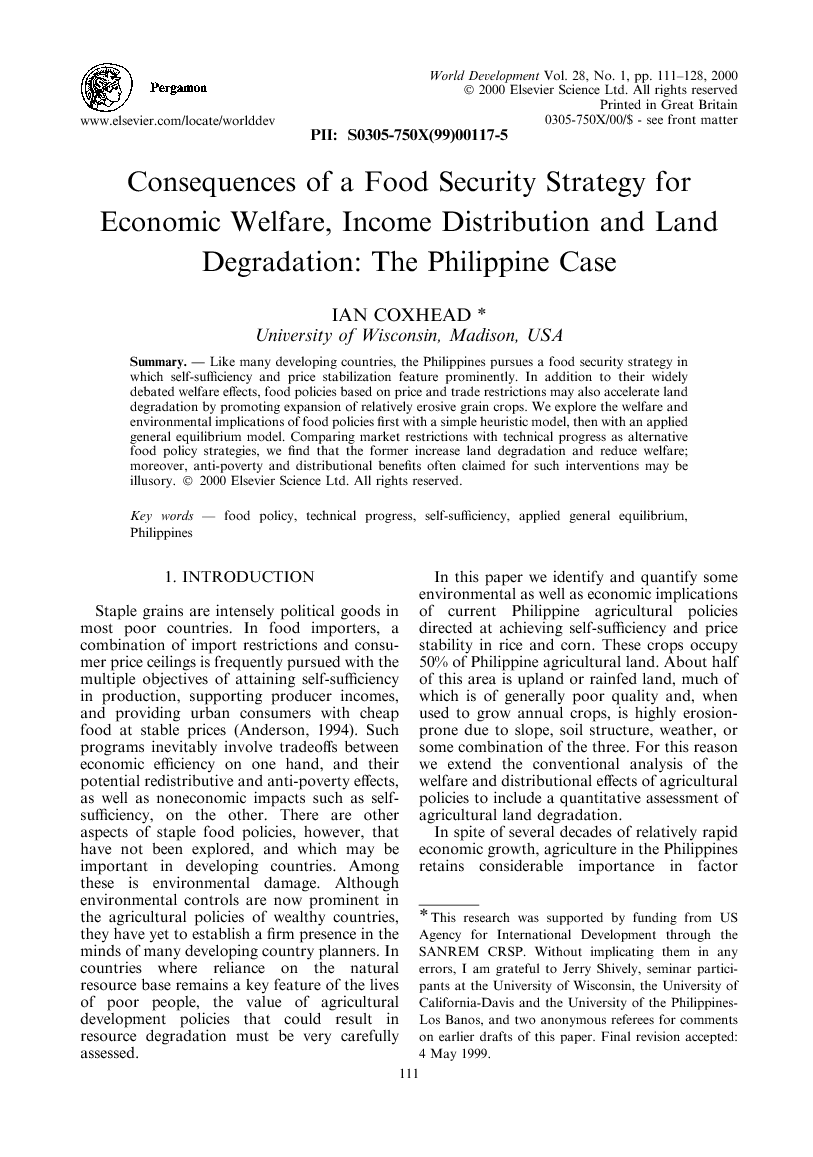 Like many developing countries, the Philippines pursues a food security strategy in which self-sufficiency and price stabilization feature prominently. In addition to their widely debated welfare effects, food policies based on price and trade restrictions may also accelerate land degradation by promoting expansion of relatively erosive grain crops. We explore the welfare and environmental implications of food policies first with a simple heuristic model, then with an applied general equilibrium model. Comparing market restrictions with technical progress as alternative food policy strategies, we find that the former increase land degradation and reduce welfare; moreover, anti-poverty and distributional benefits often claimed for such interventions may be illusory.

Staple grains are intensely political goods in most poor countries. In food importers, a combination of import restrictions and consumer price ceilings is frequently pursued with the multiple objectives of attaining self-sufficiency in production, supporting producer incomes, and providing urban consumers with cheap food at stable prices (Anderson, 1994). Such programs inevitably involve tradeoffs between economic efficiency on one hand, and their potential redistributive and anti-poverty effects, as well as noneconomic impacts such as self-sufficiency, on the other. There are other aspects of staple food policies, however, that have not been explored, and which may be important in developing countries. Among these is environmental damage. Although environmental controls are now prominent in the agricultural policies of wealthy countries, they have yet to establish a firm presence in the minds of many developing country planners. In countries where reliance on the natural resource base remains a key feature of the lives of poor people, the value of agricultural development policies that could result in resource degradation must be very carefully assessed. In this paper we identify and quantify some environmental as well as economic implications of current Philippine agricultural policies directed at achieving self-sufficiency and price stability in rice and corn. These crops occupy 50% of Philippine agricultural land. About half of this area is upland or rainfed land, much of which is of generally poor quality and, when used to grow annual crops, is highly erosion-prone due to slope, soil structure, weather, or some combination of the three. For this reason we extend the conventional analysis of the welfare and distributional effects of agricultural policies to include a quantitative assessment of agricultural land degradation. In spite of several decades of relatively rapid economic growth, agriculture in the Philippines retains considerable importance in factor incomes and trade, and basic foods constitute a large share of consumer spending. All Philippine governments in the postwar era have attempted to increase domestic production with the explicit goals of achieving national self-sufficiency and ensuring price stability for producers and consumers alike, as key components of food security and income redistribution strategies Mangahas, 1975, Intal and Power, 1990 and Pagulayan, 1998.1 Philippine grain yields are low by Asian standards, and with relatively low spending on agricultural infrastructure and technology, yields have not risen as rapidly as in comparable countries. Consequently, output growth has been due primarily to area expansion, promoted by trade and price policies. The chief agency of food policy has been the National Food Authority (NFA), which from 1950 until the early 1990s held a monopoly over Philippine cereal trade as well as engaging in domestic purchase, storage and release to promote production and to defend producer price floors and consumer price ceilings. Given the political significance of self-sufficiency, NFA grain imports are historically very tightly circumscribed,2 and in spite of liberalization in recent years, nominal protection rates (NPRs) remain high by comparison with other agricultural commodities. The NPR for rice averaged 8% from 1960–86. That for corn has generally been much higher, especially after the mid-1970s when self-sufficiency was made a goal: the NPR averaged 18% in 1970–74, and 42% in 1983–86 (Intal & Power, 1990); in 1990 it reached 63% (Pagulayan, 1998), and has remained at or above this level since (for comparison, all other crops except sugar have negative average NPRs, while the average manufacturing NPR exceeded 30% until recently). While the rhetoric of agricultural policy also prioritizes technological progress and infrastructure development, the net subsidy received by the NFA for its grain price and marketing programs exceeds the agricultural research and development (R&D) budget by a factor of 50 (Manasan, 1994). Expansion of the permanent agricultural area takes place mainly at the frontier, in upland agronomic zones. It occurs through replacement of perennial and long-fallow agricultural systems (including forests) by short-season crops, among which corn predominates.3 In seasonal cropping the soil is tilled more frequently and exposed for longer periods to the erosive effects of rain and wind, so this land use change has been associated with rapid increases in upland land degradation and soil erosion. Corn in particular is associated with high rates of soil nutrient uptake and erosion in tropical soils, and among upland crops in the Philippines is the chief contributor to land degradation by virtue both of its high relative erosivity and its large share of upland cropped area (David, 1988). Agricultural policies that support corn prices thus contribute to increased land degradation.4 Technical progress could inhibit this by raising yields on existing croplands, thus allowing food self-sufficiency targets to be achieved at lower levels of price support. Lower protection for corn producers would in turn diminish incentives to continue expanding corn production in uplands. In other words, investments in technical progress might help the Philippines achieve its food policy goals at a lower environmental cost than the equivalent amount spent in defense of producer prices. Our results in this study suggest that endogenous changes in the rate of land degradation caused by Philippine cereal policies aimed at self-sufficiency and price stability are large in relation to national income, agricultural factor markets, and the budgets of government agencies charged with promoting soil conservation. These environmental costs should be included in assessments of the benefits and costs of agricultural policy.

Food security in staple grains is an important policy target in many developing countries. If pursued purely or primarily through trade and price interventions, however, it is likely to be achieved at some cost in terms of economic welfare. In economies where agriculture is large in relation to total income, employment, or household expenditures, the effects of agricultural support programs may be pervasive, causing reduced profitability even in nonagricultural sectors. In addition, price support for food crops causes scarce agricultural land to be transferred from generally less erosive to more erosive uses, and the consequent decline in effective land area means that future generations also bear part of the cost of policies directed at the current generation. Conversely, investments in technical progress and improved land productivity may have social benefits in excess of private profits if incentives to use land in environmentally damaging ways diminish as a result. The empirical core of our study indicates the importance of a general equilibrium appraisal of welfare and environmental impacts of food policy. Interventions—whether they serve self-sufficiency, price stabilization or distributional goals—may create environmental ``surprises'' through the reallocation of depletable natural resources or through externalities. Moreover, if the Philippine results are a guide, the distributional gains often cited in defense of market-based food policies may well take the perverse form of a “leveling-down” of all incomes. Our analytical and simulation results suggest that some forms of agricultural growth might be consistent both with increased aggregate real income and reduced agricultural land degradation. In the Philippines, technical progress in corn—a relatively erosive crop characterized by income-inelastic domestic demand—results in reductions in corn area and thus less land degradation, so long as the gains from the productivity growth result in lower producer prices. Technical progress in corn has a regressive distributional impact, but only in the sense that the real expenditures of the poor rise less rapidly than those of the rich. Investments in productivity growth for the corn sector would thus appear to have relatively high social rates of return when the benefits of reduced land degradation are included. By contrast, market interventions appear to have only modest success in supporting producer prices and to have little ameliorative impact on income distribution. They may also promote accelerated degradation of the agricultural resource base.