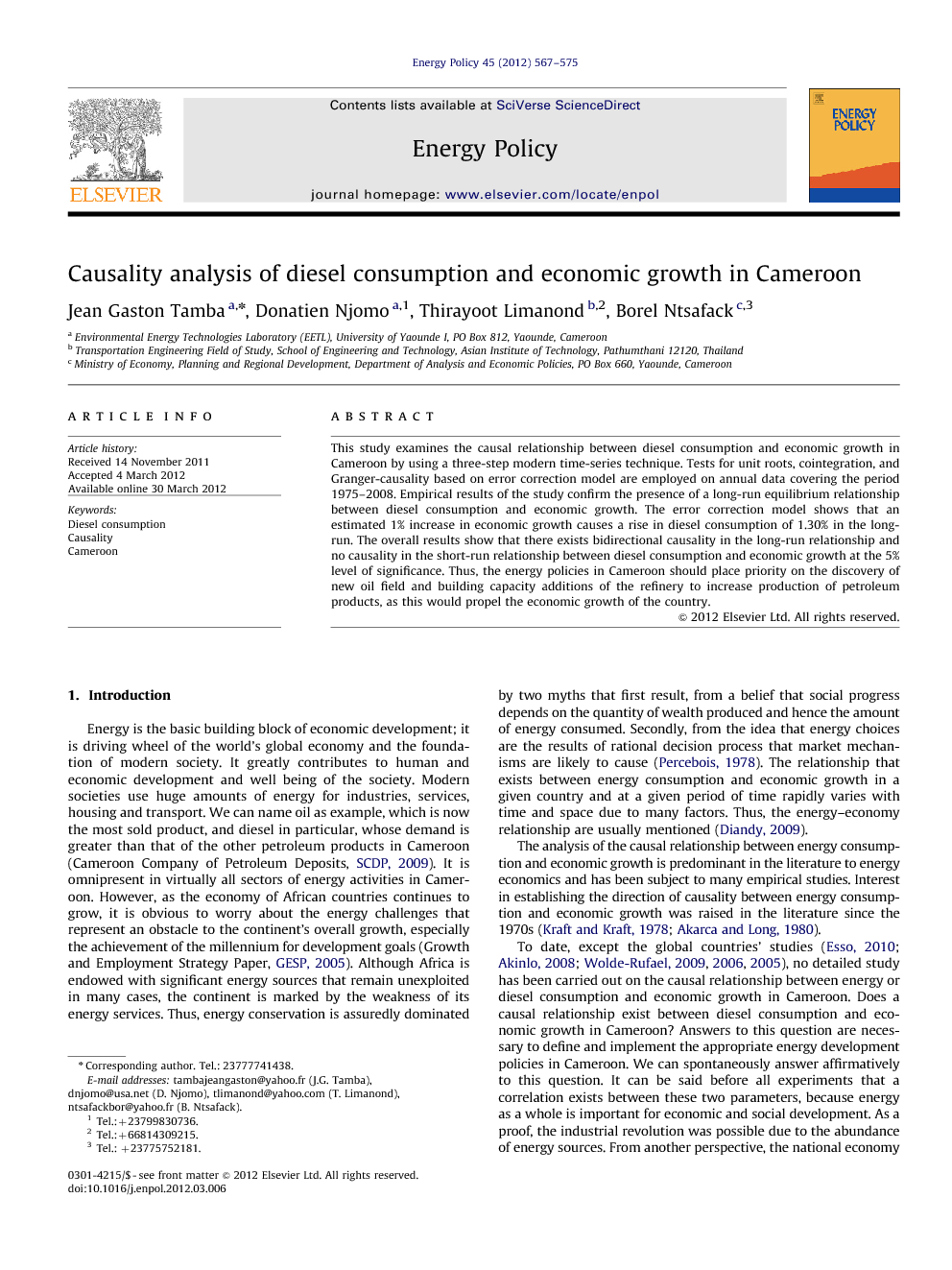 This paper analyzes the causal relationship between diesel consumption and GDP in Cameroon over the period 1975–2008. Data series are obtained by the national institute in Cameroon. This study was done by using some developments in the econometrics of non-stationary time series including the cointegration theory. These times series techniques have permitted to explore the causal relationship between diesel consumption and economic growth in Cameroon. We began by testing the order of integration of series by the ADF unit root test. Then we tested the cointegration to determine the existence of a long-run relationship between variables. Finally we estimated the error correction model that aims at accounting in a same equation of a possible deviation from a long-run equilibrium and short-run adjustment dynamics of this equilibrium. The cointegration tests concluded the existence of ECT with the variables. This result is confirmed by Akinlo (2008), who was interested in 11 Sub-Saharan countries over the period 1980–2003, is also a cointegrating relationship between economic growth and energy consumption in Cameroon. The causality test within the error correction model shows that GDP Granger cause diesel consumption and diesel consumption Granger cause GDP at the 5% level. Thus, we concluded that there exist bidirectional causality in long-run and no causality in short-run relationship at the 5% level between diesel consumption and GDP. Our results are not in line with Esso (2010) and Akinlo (2008). They find no causality between energy consumption and economic growth. An interesting finding of the study illustrates that the vector error correction model analysis found that a one percent increase in GDP corresponds to a 1.3% rise in diesel consumption in the long term. This can be roughly translated as an energy intensity (percent increase of oil consumption/one percent increase of GDP) of 1.3 for the nation. In Cameroon, an economic policy aimed at improving energy or diesel supply will inevitably have a positive impact on economic growth. Hence, energy is a stimulus to economic growth and feedback. Moreover, an economic growth will be according to forecasts of the Ministry of Economy, Planning and Regional Development focus on increasing diesel consumption in the industrial sector, and consequently, the economic and social development of Cameroon. In addition, Rosellini (2005) shows that the main challenge for the oil countries of Central Africa are the maximization of their oil resources for the development and well-being of the population. This is in agreement with the statistical results. However, field surveys (Ministry of Energy and Water resources, 2011) have shown that a reduction in diesel consumption or energy to be efficient (the energy intensities in the countries where energy is utilized more efficiently are close to 1.0 or lower) is not a conceivable option in Cameroon. For, according to the SIE-Cameroon (2010), Cameroon's population still has a difficult access to the consumption of energy (except for firewood). Thus, the average energy consumption per capita in 2008 was 0.30 toe and it is strongly dominated by firewood consumption which is (very inefficient for the economy of Cameroon) at 73%. This energy consumption is lower than the African (0.48 toe per capita) and world (1.25 toe per capita) average. This is a tangible proof that Cameroon has not yet attained self-sufficiency. Hence by making modern energy (besides firewood) available to everyone could help reduce not only poverty but also improve the leaving standard in Cameroon. The government should adopt policies to ensure that the diesel consumption used in the country turns into a full benefit of the nation's economy improvement. Ultimately, energy supply is inadequate and seriously hampers economic activities and the current structure of the economy of Cameroon, based on finite and exhaustible resources, is unsustainable (Ministry of Energy and Water resources, 2011). Diesel and other fossil fuels are non-renewable resources, and can potentially become scarce in the long-run. Moreover, they produce greenhouse gases, which, in turn, accelerate climate change phenomenon for the whole globe. Thus, for future years, it would be a proper time for the government to start exploring a variety of alternative and clean fuel options that suit for the nation in the long-run. It should be noted that the switch of energy resources would require large amount of resources, investment, manpower, and time. Energy planning in Cameroon with considerations of alternative fuels is required to ensure energy security and sustain the social and economic growth in the country for future years.