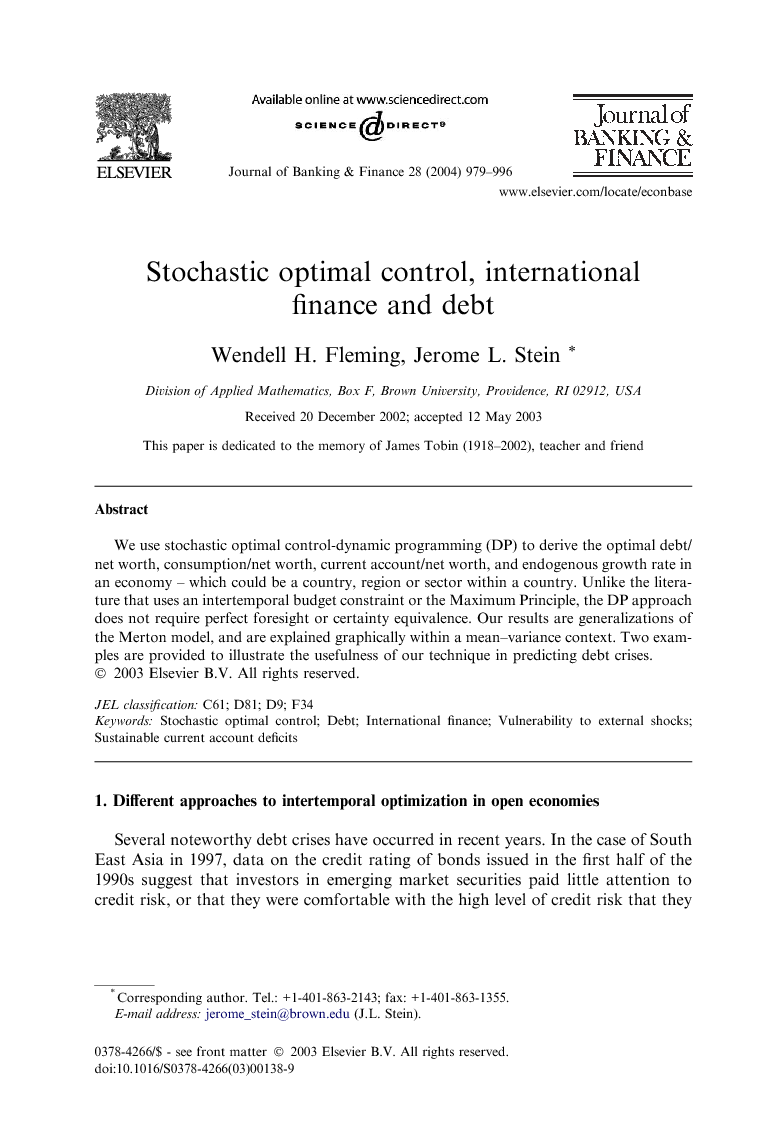 We use stochastic optimal control-dynamic programming (DP) to derive the optimal debt/net worth, consumption/net worth, current account/net worth, and endogenous growth rate in an economy – which could be a country, region or sector within a country. Unlike the literature that uses an intertemporal budget constraint or the Maximum Principle, the DP approach does not require perfect foresight or certainty equivalence. Our results are generalizations of the Merton model, and are explained graphically within a mean–variance context. Two examples are provided to illustrate the usefulness of our technique in predicting debt crises.

Our stochastic optimal control approach has been applied in two papers, Stein and Paladino (2001) and Stein (2003). In the first paper, we evaluated the country default risk in emerging markets. In this case, the debt is short-term sovereign debt that must be repaid at maturity. This paper is an application of the stochastic opti- mal controls models of Fleming and Stein (2001) in discrete time and with a finite horizon. We provide benchmarks to evaluate an optimal debt and a maximal debt ( debt-max ), when risk is explicitly considered. Defaults are likely to occur when the servicing of the debt requires a decline in consumption. When the debt exceeds debt-max , the expected consumption will decline. Therefore, when the actual debt ex- ceeds debt-max , then the economy will default when a ‘‘bad shock’’ occurs. We con- sider two sets of high-risk countries during the period 1978–99: a subset of 21 countries that defaulted on the debt, and another set of 13 countries that did not de- fault. Default is a situation where the firms or government of a country reschedule the interest/principal payments on the external debt. We thereby explain how ouranalysis can anticipate default risk, and add another dimension to the literature of early warning signals of default/credit risk. Our current paper involves an infinite horizon and continuous time, and ‘‘debt’’ includes equity and long-term bonds. There have not been debt crises in the major countries in recent years. In principle, our current paper is applicable to a country, a group of countries such as the European Monetary Union, a region within a coun- try or a large sector within a country. There was a severe agricultural debt crisis in the US during the first half of the 1980s. For this reason, Stein (2003) applies the model in present paper to explain the US agricultural debt crisis. There are reliable data for the US agricultural sector, which relates directly to the theoretical variables. There is just one currency and the values of income, debt, interest expense, capital and equity are reported regularly. Since there are empirical measures of the objective components of the optimal debt f , we have chosen to cite this example of the ad- vantages of our DP approach. 15 Besides the parameters in our model to be estimated from data, there are two model design parameters to be freely chosen. These subjective variables are discount rate/time preference d , and the exponent c of the HARA function. Delta effectively determines the planning horizon and ð 1 c Þ is a measure of risk aversion. The op- timal debt/equity ratio f turns out not to depend on time preference, and thus is not affected by the planning horizon. A myopic planner, with large delta, has the same optimal f as one with a longer planning horizon. Historical data show that over a many year horizon, the mean productivity b and mean interest rate r in the model vary considerably depending on the economic envi- ronment. Our technique is to replace them with short term (five year) moving averages of b ð t Þ and r ð t Þ and then use these averaged values over shorter time scales as the true means b and r in the formula for optimal f . The variances and correlations are also time varying. The optimal f is then also time varying, primarily because the ð b r Þ = r 2 varies;but the intercept f ð 0 Þ has not changed drastically over the periods. There- fore, the optimal f follows ð b r Þ as five-year moving averages of past net returns. The farm debt crisis occurred during the period 1980–88, the shaded area in Fig. 3, when defaults and delinquency ratios rose drastically. We plot in normalized form, 16 to facilitate comparisons, the actual debt/equity ratio DEBTEQUITY, the mean net return ð b r Þ 5 ¼ RETVAINTD5 based upon past information and the ratio of interest payments/value added INTVA ¼ rL = Y . On the basis of this figure we see that during the period 1975–85 movements in the actual debt/equity ratio DEBTEQUITY fail to accord with those in the mean net re- turn ð b r Þ 5 ¼ RETVAINTD5. At any time ð b r Þ 5 is known from past data. From 1975–83 the five-year MA net return was declining;and from 1979–84 the actual net return was negative. The actual numbers are as follows.The optimal debt/equity ratio should have been declining. In terms of Fig. 1, when the mean net return declines from B to A , the optimal ratio declines from f ð B Þ to zero. Our analysis correctly predicts a debt crisis in the shaded region. On the other hand, our analysis correctly predicts tranquil periods pre-1979 and post-1990. We have cited two examples of the usefulness of our technique: one for the emerg- ing market countries and the other for the debt crisis in US agriculture.