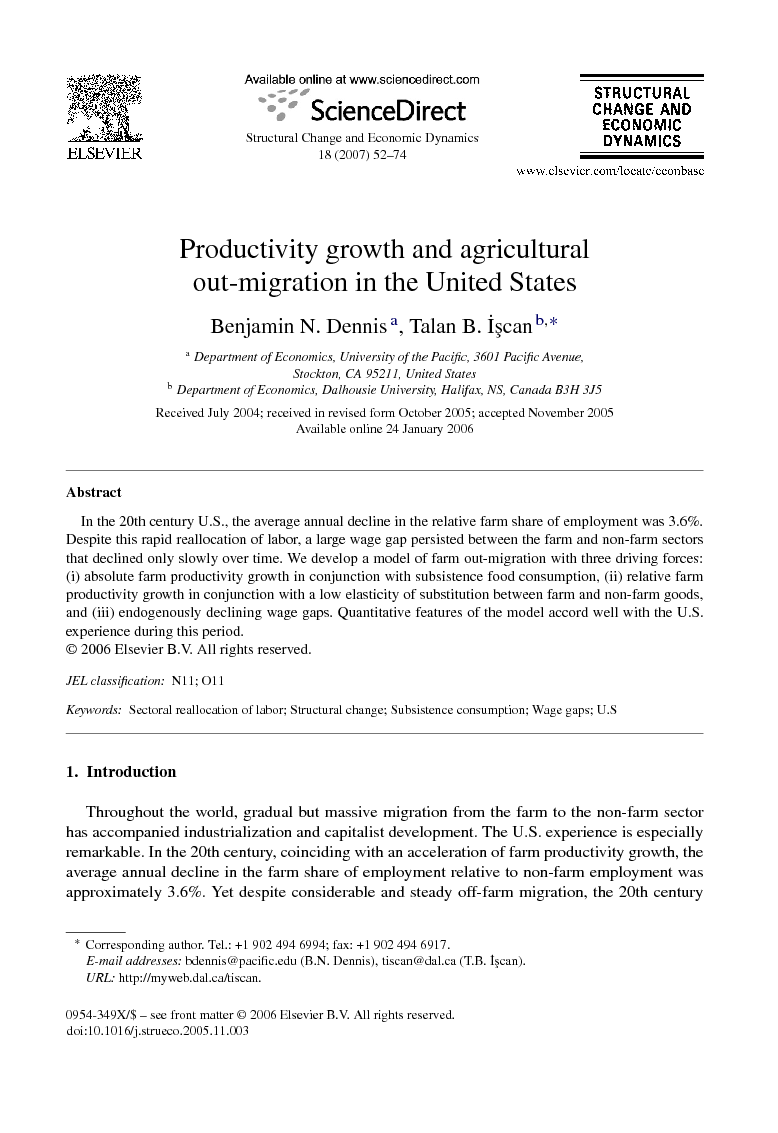 In the 20th century U.S., the average annual decline in the relative farm share of employment was 3.6%. Despite this rapid reallocation of labor, a large wage gap persisted between the farm and non-farm sectors that declined only slowly over time. We develop a model of farm out-migration with three driving forces: (i) absolute farm productivity growth in conjunction with subsistence food consumption, (ii) relative farm productivity growth in conjunction with a low elasticity of substitution between farm and non-farm goods, and (iii) endogenously declining wage gaps. Quantitative features of the model accord well with the U.S. experience during this period.

This paper makes a case for three important mechanisms that together can account for the key stylized facts of the U.S. off-farm labor reallocation experience of the 20th century. We show the economic significance of three driving forces of farm out-migration during this period: (i) absolute farm productivity growth in conjunction with subsistence food consumption, (ii) relative farm productivity growth in conjunction with a low elasticity of substitution between farm and non-farm goods, and (iii) endogenously declining wage gaps. Although this paper deals with the U.S. experience, the structural changes discussed have occurred and will continue to occur in developing countries. The mechanisms we identify are general and significant. In particular, within a unified framework we demonstrate that the recognition of subsistence consumption in agriculture accounts for not only the pattern of off-farm migration, but also, in conjunction with fixed relocation costs, the secular trends in observed wage gaps. We have framed our analysis in the context of a closed economy. This is a reasonable framework for the U.S., especially for much of the long time period we examined. In our extended model without migration costs, because they are driven by identical demand and supply factors, agriculture's share of employment and consumption expenditures coincide as is commonly found in other structural change models (e.g., Echevarria, 1997 and Kongsamut et al., 2001) and historical accounts (e.g., Crafts, 1980). Naturally, in the presence of international trade, these two shares may evolve differently. Therefore, extending this class of models to an open economy context is important and left for future research. Finally, we have framed our analysis in the context of an infinite horizon economy with a constant population. This is also common to other structural change models, though it overlooks the demographic transformation that has also been central to earlier accounts of structural transformation (e.g., Kuznets, 1966). We leave this extension for future work as well.