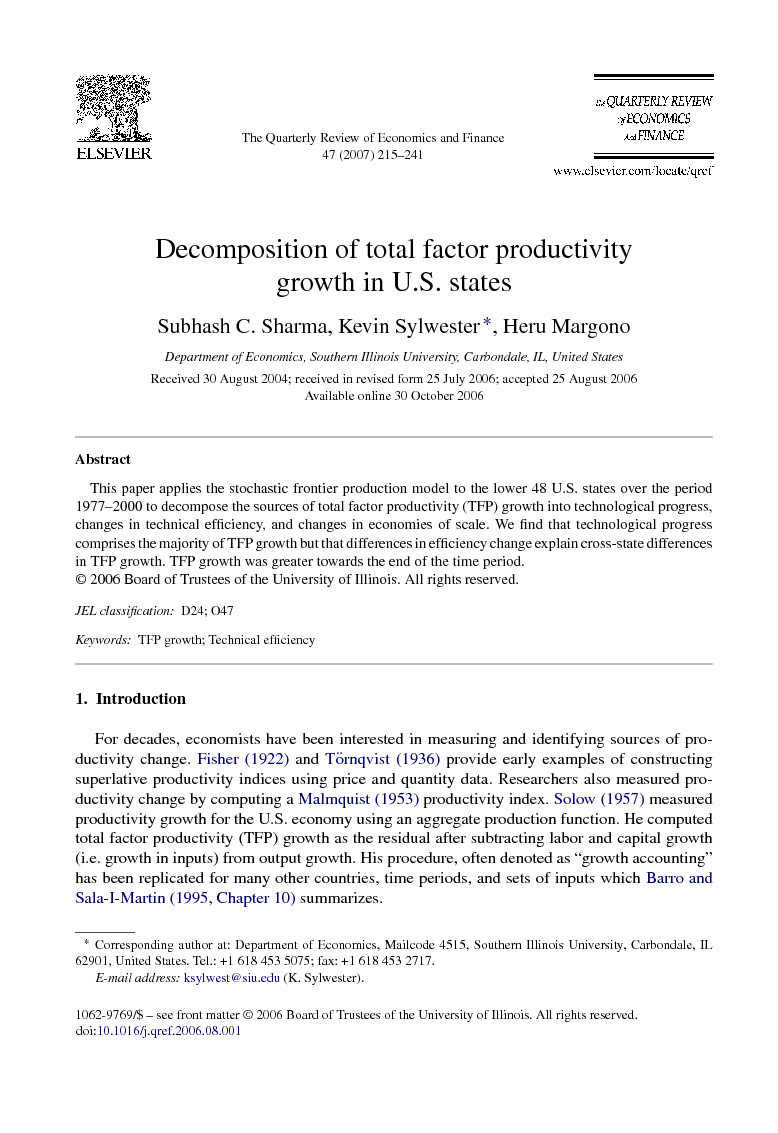 This paper applies the stochastic frontier production model to the lower 48 U.S. states over the period 1977–2000 to decompose the sources of total factor productivity (TFP) growth into technological progress, changes in technical efficiency, and changes in economies of scale. We find that technological progress comprises the majority of TFP growth but that differences in efficiency change explain cross-state differences in TFP growth. TFP growth was greater towards the end of the time period.

This paper examined total factor productivity growth across U.S. states. Our findings are as follows: (1) TFP growth mainly stems from technological progress and this is encouraging because changes in efficiency can no longer be positive once the frontier is reached. However, differences in TFP growth across states mainly stem from differences in efficiency change. (2) Efficiency in the 48 contiguous states averaged 76% from 1977 to 2000. States undergoing the greatest declines in efficiency were oil and coal producing states. Those experiencing the greatest increases were those with larger financial sectors. (3) Human capital and urbanization are both associated with efficiency. Of the industries, agriculture is negatively associated with efficiency whereas financial sectors are positively associated. (4) The biggest states had the higher labor elasticities and lowest capital elasticities. The assumption of constant returns to scale often employed when using aggregate production functions is supported here and so the economies of scale component is negligible with regards to TFP growth. In our estimation, we have attempted to control for price differences across states by use of regional dummies. However, this is not a perfect solution as states within the same region might also significantly differ across this dimension. Consider Vermont versus New York. One possible way to account for these differences is through our measure of urbanization as price levels are likely to be higher in cities and this might be what our urbanization variable is capturing. If so, then it is less clear that some aspect of agglomeration is leading to greater efficiency. Obviously, this is an avenue of future research although what is really needed are state GDP measures that are adjusted for purchasing power parity differences across states. We encourage that such measures be developed, not only to better measure differences in efficiency across states but to compute TFP growth since changes in efficiency appear to be important in explaining differences in TFP growth across states.