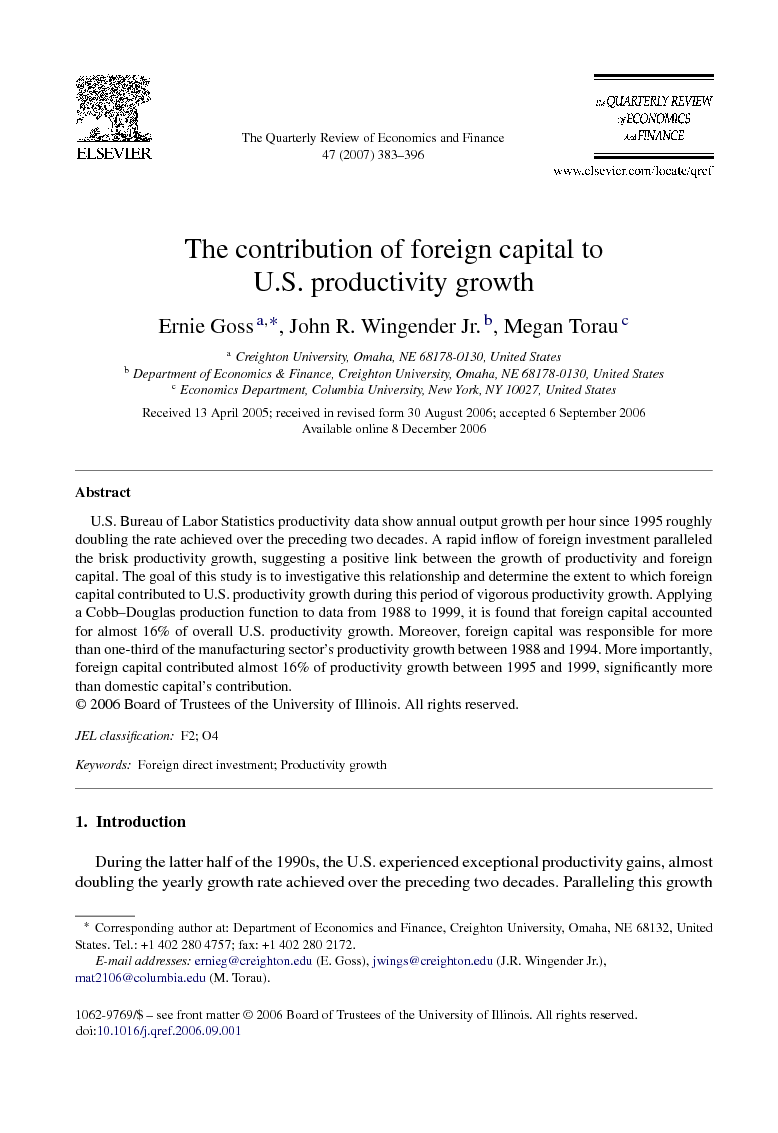 During the latter half of the 1990s, the U.S. experienced exceptional productivity gains, almost doubling the yearly growth rate achieved over the preceding two decades. Paralleling this growth in productivity was a rapid increase in foreign direct investment (FDIUS) suggesting a positive link between the productivity upturn and foreign capital. Table 1 provides country detail for FDIUS on a historical basis from 1988 to 1999. Over the time span, FDIUS grew each year with the overall growth rate greatly exceeding that of overall GDP growth. While the amount of FDIUS from each countries varied from year-to-year, the major countries investing in the U.S. were developed countries. Fig. 1 depicts the relationship between foreign capital and U.S. productivity from 1980 to 1999. The figure shows several consecutive years of productivity growth coupled with growth in foreign capital stocks. In particular, during the latter half of the 1990s, foreign capital's growth path paralleled that of productivity gains.Despite the possible linkage between foreign capital and productivity, no research, to the authors’ knowledge, has estimated foreign capital's contribution to U.S. economic performance during this period. This dearth in research can be attributed to the relative small magnitude of foreign to domestic capital, and to the traditional belief that capital is fungible. As such, skeptics argue that the surge in aggregate productivity owes little to foreign capital, and can instead be traced to other factors such as the rapid buildup in information technology capital, both domestic and foreign. The goal of this study is to examine the extent to which foreign capital contributed to the revival in U.S. productivity growth focusing on two periods, 1988–1994 and 1995–1999.1 Examining an earlier period, Graham and Krugman (1995) found that the U.S. has benefited greatly as the world's largest importer and exporter of capital. They noted that FDIUS was growing, and it provided mostly positive benefits to the U.S. economy with few negatives. From a political policy perspective, the researchers asserted that most FDIUS comes from developed countries that are U.S. allies, thus no special policy proposals are recommended. They concluded that the U.S. had become more like other countries in terms of serving as a host for foreign affiliates as well as a home for multi-national firms. If foreign capital was an important contributor to U.S. productivity gains in the latter half of the 1990s, then recent pullbacks in foreign investment in the U.S. should raise concerns regarding the sustainability and/or volatility of the nation's productivity gains. According to U.S. Bureau of Economic Analysis (BEA) data, the compound annual growth rate of FDIUS inflows declined from 10.6% between 1988 and 1999 to 5.0% between 2000 and 2004. Moreover, the OECD estimates that FDI inflows to member countries fell by an additional 25–30% for 2003 (Anonymous, 2003). Fig. 2 shows foreign capital as a percent of total capital from 1980 to 1999. As presented, this percentage increased from 2.9% in 1980 to 5.6% in 1999, but with considerable variation over the period. Fig. 3 compares growth rates of foreign and domestic capital from 1980 to 1999. Of course, foreign capital's much smaller base tended to produce much larger variations in its growth rate over the period. The standard deviation of foreign capital's growth rate was 9.3%, while it was only 1.0% for domestic capital. In addition, foreign capital's yearly growth rate dropped considerably after the recessions of 1981–1982 and 1991. Likewise, the year-over-year growth rate in FDIUS plunged to 0.1% in 2002, the year after the 2001 U.S. recession, from 31.5% in 2001.Fig. 4 presents the ratio of FDIUS to U.S. Direct Investment Abroad (USDIA). The figure shows the increasing importance of foreign capital to the U.S. economy in the latter half of the 1990s. U.S. BEA data show that after declining from 3.2 in 1988 to 0.5 in 1992, the ratio increased to 2.1 in 1999. As presented, the U.S. began the decade of the 1990s as a net exporter of investment, but ended the decade as a net importer of investment. In 1999, foreign investment in the U.S. was more than twice U.S. investment abroad.It is puzzling that no studies, to the authors’ knowledge, have specifically examined the relationship between FDIUS and U.S. productivity. More than two decades ago, Arpan, Flowers, and Ricks (1981) noted that despite the significance of FDIUS for the economy, scholars had completed little published research on the topic. In suggesting areas for future research, the authors concluded that there was a need for studies examining the impact of FDIUS on local, state, and regional economies. However, in the intervening years, scholars have instead focused on USDIA.2 Examining data from two decades later, Lavine (2001) noted that despite the increasing magnitude of spending to attract foreign investment and the varying success of states in attracting new foreign firms, little research had actually examined the impact of foreign capital on output growth, and had instead tended to focus on the impact of tax incentives.3 Leichenko and Erickson (1997) found that inflows of FDIUS were statistically significant and positively related to exports by the U.S., and that the increased export activity was likely due to increased productivity caused by FDI. Their review of the relevant literature indicated that there were sound theoretical arguments to support the proposition that increased levels of FDI enhanced international competitiveness, and led to an increase in export activity. While the researchers established a link between FDIUS and exports, the missing nexus was between FDIUS and productivity. In the end, the authors concluded that thus far, research has produced no compelling conclusions regarding the impact of rising FDIUS on U.S. productivity growth. This study fills this research gap. Using foreign capital stock estimates from the U.S. BEA, this study pools cross-sectional and time-series data in a Cobb–Douglas regression framework to estimate the extent to which foreign capital contributed to U.S. productivity between 1988 and 1999. This study further examines how foreign capital's contribution to productivity growth differed between 1988–1994 and 1995–1999 and the extent to which foreign capital's contribution differed between manufacturing and non-manufacturing sectors. The next section provides a discussion of foreign capital and domestic capital in the U.S.

Using U.S. BEA foreign capital data, this study examined the impact of foreign capital on productivity growth. It found that foreign capital was a positive and statistically significant factor stimulating productivity growth during the latter half of the 1990s, a period marked by rapid productivity growth. Given current low investment rates of foreign capital, there appears to be significant room for enhancing productivity growth via expanding foreign capital. While the productivity enhancing power of foreign capital has not been monumental, it has been statistically significant with quite promising measured impacts. Furthermore, findings from this study suggest that foreign capital provides counter-cyclical support for the overall U.S. economy as it grew at a faster rate during slower periods of U.S. growth. This latter proposition should stimulate greater research in this area. Laster and McCauley (1994) concluded that the profitability of foreign-owned companies should rebound as they reduce their acquisition activity, gain experience, and divest under-performing operations. Findings from the present study underpin this finding. The increase of FDI in expansionary U.S. economic periods leads to increased productivity and fuels more rapid economic growth. Further research is needed to determine its impact on the U.S. money supply, money reserves, money velocity, inflation, and Federal Reserve policy. Advocates of the “new economy” hail the very strong economic performance between 1995 and 1999 as evidence of a sustainable increase in the underlying growth potential of the U.S. Whether these gains ultimately prove permanent or transitory remains unknown, but it is certain that substantial inflows of private foreign capital have contributed to it.