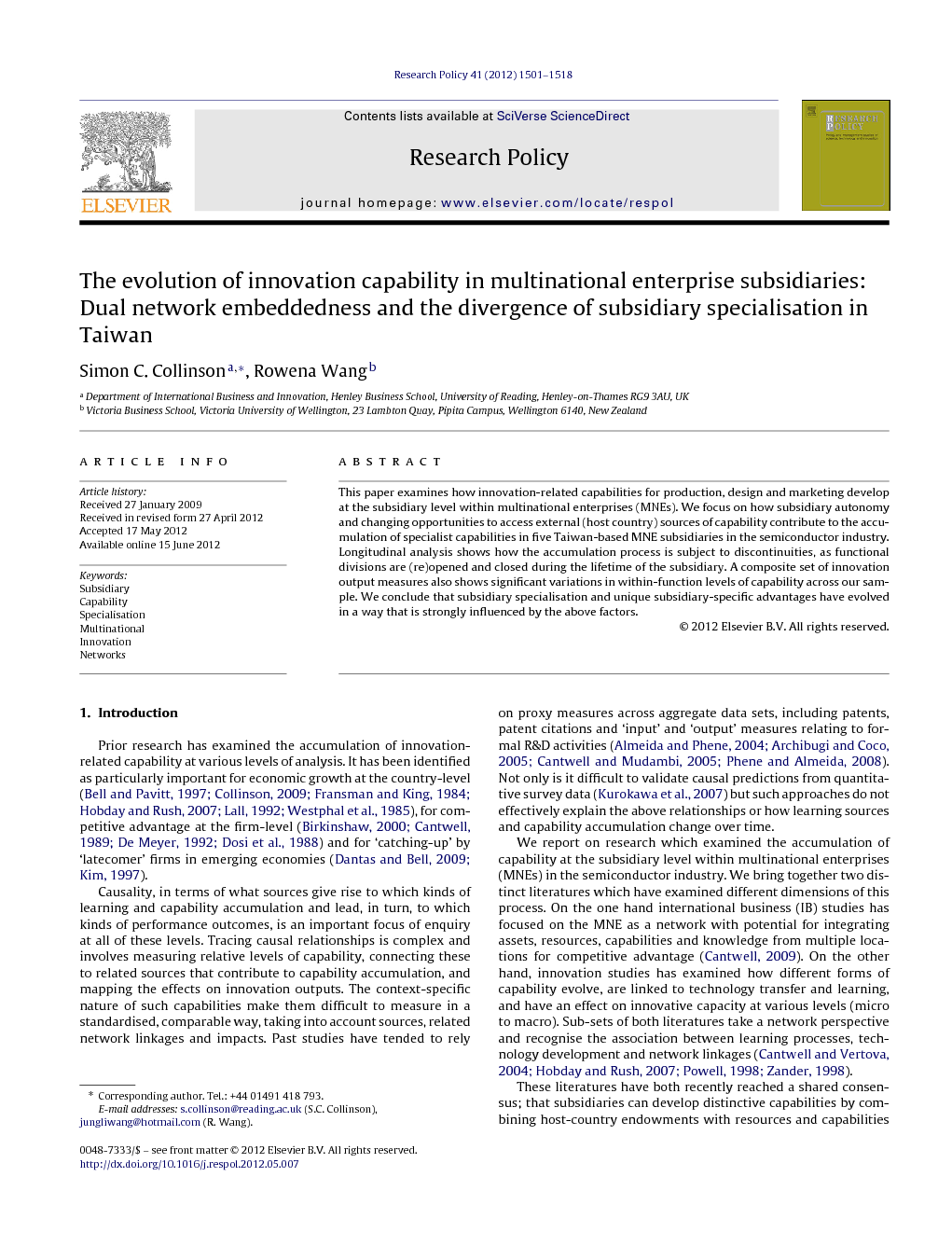 This paper examines how innovation-related capabilities for production, design and marketing develop at the subsidiary level within multinational enterprises (MNEs). We focus on how subsidiary autonomy and changing opportunities to access external (host country) sources of capability contribute to the accumulation of specialist capabilities in five Taiwan-based MNE subsidiaries in the semiconductor industry. Longitudinal analysis shows how the accumulation process is subject to discontinuities, as functional divisions are (re)opened and closed during the lifetime of the subsidiary. A composite set of innovation output measures also shows significant variations in within-function levels of capability across our sample. We conclude that subsidiary specialisation and unique subsidiary-specific advantages have evolved in a way that is strongly influenced by the above factors.

Prior research has examined the accumulation of innovation-related capability at various levels of analysis. It has been identified as particularly important for economic growth at the country-level (Bell and Pavitt, 1997, Collinson, 2009, Fransman and King, 1984, Hobday and Rush, 2007, Lall, 1992 and Westphal et al., 1985), for competitive advantage at the firm-level (Birkinshaw, 2000, Cantwell, 1989, De Meyer, 1992 and Dosi et al., 1988) and for ‘catching-up’ by ‘latecomer’ firms in emerging economies (Dantas and Bell, 2009 and Kim, 1997). Causality, in terms of what sources give rise to which kinds of learning and capability accumulation and lead, in turn, to which kinds of performance outcomes, is an important focus of enquiry at all of these levels. Tracing causal relationships is complex and involves measuring relative levels of capability, connecting these to related sources that contribute to capability accumulation, and mapping the effects on innovation outputs. The context-specific nature of such capabilities make them difficult to measure in a standardised, comparable way, taking into account sources, related network linkages and impacts. Past studies have tended to rely on proxy measures across aggregate data sets, including patents, patent citations and ‘input’ and ‘output’ measures relating to formal R&D activities (Almeida and Phene, 2004, Archibugi and Coco, 2005, Cantwell and Mudambi, 2005 and Phene and Almeida, 2008). Not only is it difficult to validate causal predictions from quantitative survey data (Kurokawa et al., 2007) but such approaches do not effectively explain the above relationships or how learning sources and capability accumulation change over time. We report on research which examined the accumulation of capability at the subsidiary level within multinational enterprises (MNEs) in the semiconductor industry. We bring together two distinct literatures which have examined different dimensions of this process. On the one hand international business (IB) studies has focused on the MNE as a network with potential for integrating assets, resources, capabilities and knowledge from multiple locations for competitive advantage (Cantwell, 2009). On the other hand, innovation studies has examined how different forms of capability evolve, are linked to technology transfer and learning, and have an effect on innovative capacity at various levels (micro to macro). Sub-sets of both literatures take a network perspective and recognise the association between learning processes, technology development and network linkages (Cantwell and Vertova, 2004, Hobday and Rush, 2007, Powell, 1998 and Zander, 1998). These literatures have both recently reached a shared consensus; that subsidiaries can develop distinctive capabilities by combining host-country endowments with resources and capabilities available via internal MNE networks (Cantwell, 2009, Sigueiredo, 2011 and Marin and Bell, 2010). These subsidiary-specific capabilities give them the potential to contribute to the innovative capacity of the overall firm. However, there have been few empirical studies showing how this occurs. Instead, two kinds of assumption have been commonly made about important aspects of the process. The first is that capability accumulation is linear and cumulative in the sense that organisations steadily get better at doing certain things over time. The second, referring more specifically to capability accumulation in MNE subsidiaries is that although their capabilities are unique insofar as they draw on host-location endowments, subsidiaries in the same industry and location are likely to develop the same kinds of capabilities as contributions to their respective MNEs. These two assumptions are explicitly tested in our research. We draw on frameworks which differentiate types and levels of capability within organisations (Lall, 1992, Hobday, 1995, Ariffin and Figueiredo, 2004 and Hobday and Rush, 2007) and extend these to compare five MNE subsidiaries in Taiwan in the semiconductor industry. Using a composite, industry and function-specific set of measures of innovation we identify different levels of ‘revealed capability’ (Figueiredo, 2011) within functions when comparing each function (production, design and marketing) across these subsidiaries at the time of our study. But we also trace back in time to identify changes in the range of functions, and therefore the range of functional types of capability, hosted by each subsidiary over time. The latter, longitudinal analysis reveals that the accumulation of capabilities is not linear; the development of specialist knowledge and expertise can stop and start at different stages of the subsidiary's evolution. The former, analysis of within-function capabilities at a single point in time, shows that these MNE subsidiaries, despite operating in the same industry and being based at the same location, have evolved different levels of within-function capability. They have specialised in terms of their innovative capabilities. This specialisation appears to be subject to several factors in combination, which account for the variations in the sourcing patterns and capability accumulation that takes place over time. The headquarters (HQ) mandate, strongly emphasised in international business studies, is just one contextual factor and operates in tandem with the changing opportunities for accessing new capabilities from internal (intra-MNE networks) and external (host country networks) sources. Each of these networks is, in turn, influenced by a number of secondary factors as described in the final sections of this paper. In order to develop these arguments we start in Section 2 by outlining the relevant theoretical foundations of our research. We locate the focal subsidiary in the context of both local and intra-firm network contexts (Fig. 1) and indicate the specific causal relationships we examine in this paper (Fig. 2). After describing our methodological approach in Section 3 we present our findings derived from the cross-subsidiary comparisons in Section 4. These are discussed in Section 5 and in Section 6 we present our conclusions about the explanations of the key causal relationships.

Our study of innovation-related capabilities in five multinational subsidiaries in the semiconductor industry, based in Taiwan, sought to examine the evolution of subsidiary specialisation. Our central aim was to challenge two major assumptions in previous studies: (1) that capability-accumulation is linear, and; (2) that subsidiaries based in the same location develop the same kinds of capabilities and contribute similarly to the innovation efforts of their parent firms. We find that capability accumulation can be discontinuous and that subsidiaries in the same host location specialise in different ways.