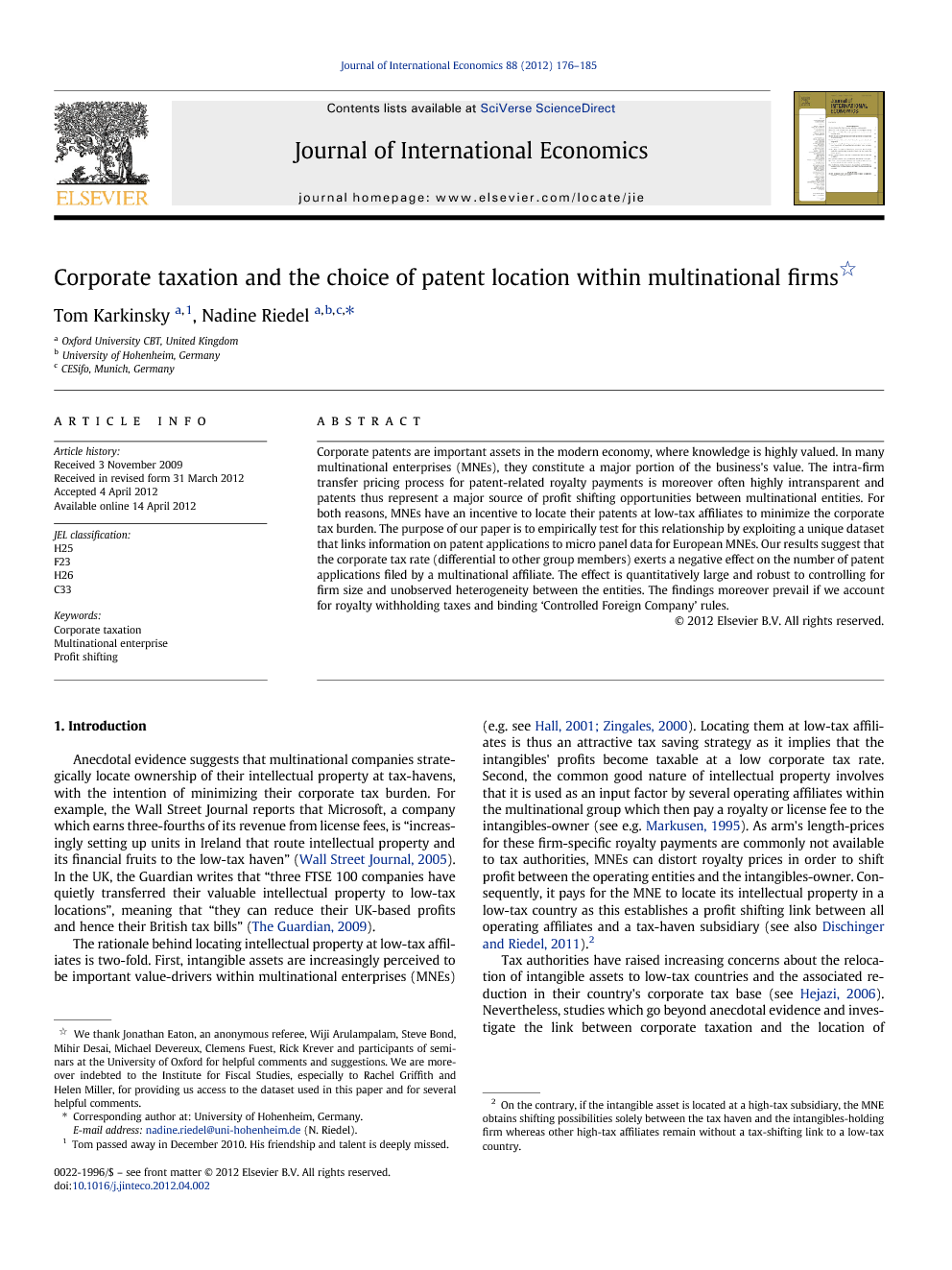 Corporate patents are important assets in the modern economy, where knowledge is highly valued. In many multinational enterprises (MNEs), they constitute a major portion of the business's value. The intra-firm transfer pricing process for patent-related royalty payments is moreover often highly intransparent and patents thus represent a major source of profit shifting opportunities between multinational entities. For both reasons, MNEs have an incentive to locate their patents at low-tax affiliates to minimize the corporate tax burden. The purpose of our paper is to empirically test for this relationship by exploiting a unique dataset that links information on patent applications to micro panel data for European MNEs. Our results suggest that the corporate tax rate (differential to other group members) exerts a negative effect on the number of patent applications filed by a multinational affiliate. The effect is quantitatively large and robust to controlling for firm size and unobserved heterogeneity between the entities. The findings moreover prevail if we account for royalty withholding taxes and binding ‘Controlled Foreign Company’ rules.

Anecdotal evidence suggests that patents and other intangible assets play a decisive role in profit shifting strategies of multinational enterprises. Several firms are known to hold their patents and trademarks in tax-haven countries like Ireland and Switzerland, famous examples are Vodafone, Pfizer and Microsoft. Although tax authorities in various countries have raised increasing concerns about these intangibles relocations, studies which test for the link between corporate taxes and the location of intangible assets in a systematic empirical framework are scarce. This paper exploits a new and unique data set which links company accounting data to information on patent applications to the European Patent Office in order to investigate whether and to what extent corporate taxation affects the patent location within multinational groups. Our results suggest that the corporate tax rate exerts a strong negative impact on a subsidiary's number of patent applications. The effect appears across a range of model specifications and is robust against controlling for affiliate size, firm fixed effects and time-varying country characteristics. Similar findings are reported if we account for the relative attractiveness of an affiliate's tax scheme by using the tax rate differential to other group members as explanatory variable. Moreover, the estimated effects prevail if we additionally account for the role of withholding taxes on royalty payments and CFC legislations. Thus, our findings indeed suggest that MNEs tend to distort the location of their corporate patents in favor of low-tax affiliates. As patented technologies are considered to be drivers of future profits and simultaneously constitute a major source of transfer pricing opportunities within multinational groups, their relocations are likely to shift relevant volumes of profit to low-tax economies. Consequently, governments have an incentive to compete for these mobile profits by reducing their corporate tax rates in order to attract multinational patents to their jurisdiction. The European Union currently appears to experience this type of tax competition behavior as the Netherlands, Belgium and Luxembourg have recently introduced special low tax rates on royalty income from patent holdings. Moreover, as the latest addition, the UK recently announced the introduction of a patent box from 2013 onwards. This in turn puts pressure on high-tax economies with large R&D activities to restrict the migration of patents and other intangible assets from their borders. One means of limiting this outflow is to introduce or tighten CFC legislations which make foreign royalty income taxable at the parent location. Examples of countries which recently introduced CFC rules are Spain and Italy. Furthermore, several countries currently consider the introduction of another anti-avoidance instrument which was implemented by the German government in 2008 and allows the German tax authorities to tax a fraction of the future income generated from patents and other (intangible) assets developed in Germany even after the relocation to a foreign country (see OECD (2009)). In the light of our results, such limitations appear beneficial as they hamper international profit shifting and tend to reduce tax competition behavior between countries.