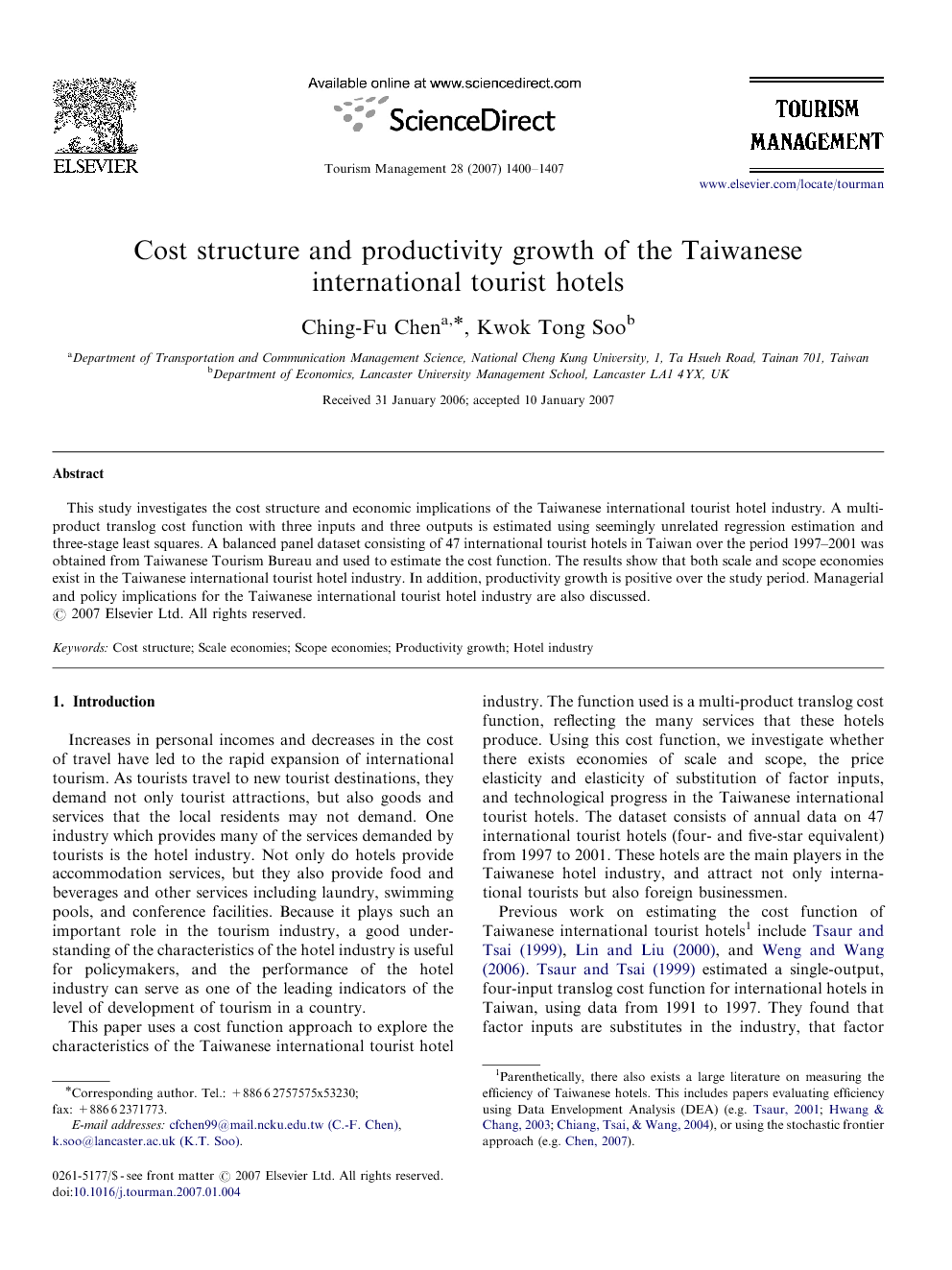 Increases in personal incomes and decreases in the cost of travel have led to the rapid expansion of international tourism. As tourists travel to new tourist destinations, they demand not only tourist attractions, but also goods and services that the local residents may not demand. One industry which provides many of the services demanded by tourists is the hotel industry. Not only do hotels provide accommodation services, but they also provide food and beverages and other services including laundry, swimming pools, and conference facilities. Because it plays such an important role in the tourism industry, a good understanding of the characteristics of the hotel industry is useful for policymakers, and the performance of the hotel industry can serve as one of the leading indicators of the level of development of tourism in a country. This paper uses a cost function approach to explore the characteristics of the Taiwanese international tourist hotel industry. The function used is a multi-product translog cost function, reflecting the many services that these hotels produce. Using this cost function, we investigate whether there exists economies of scale and scope, the price elasticity and elasticity of substitution of factor inputs, and technological progress in the Taiwanese international tourist hotels. The dataset consists of annual data on 47 international tourist hotels (four- and five-star equivalent) from 1997 to 2001. These hotels are the main players in the Taiwanese hotel industry, and attract not only international tourists but also foreign businessmen. Previous work on estimating the cost function of Taiwanese international tourist hotels1 include Tsaur and Tsai (1999), Lin and Liu (2000), and Weng and Wang (2006). Tsaur and Tsai (1999) estimated a single-output, four-input translog cost function for international hotels in Taiwan, using data from 1991 to 1997. They found that factor inputs are substitutes in the industry, that factor inputs are price inelastic, and that there is decreasing returns to scale. Lin and Liu (2000) improve on Tsaur and Tsai (1999) by estimating a multi-product translog cost function using three outputs and four inputs, using data from 1993 to 1997. Unlike Tsaur and Tsai, they find that there exist scale economies, and complementarities between accommodation and food and beverages. Weng and Wang (2006) follow Lin and Liu (2000) by using a multi-product translog cost function with three outputs and three inputs, with cross-sectional data in 2000. They find evidence of product-specific scale economies for each of their outputs (accommodation, food and beverages, and other services), as well as overall ray scale economies. They also find evidence of scope economies between certain pairs of outputs. However, because they used cross-sectional data, the productivity growth of the industry cannot be obtained from their result. The present paper builds on these three papers. Following Lin and Liu (2000), we use a multi-product translog cost function, using newer data between 1997 and 2001. Our data, obtained using the same approach as Weng and Wang (2006), is also more appropriately measured than in Lin and Liu (2000). We also innovate relative to this literature by exploring technological change in the industry. This follows the approach of Wang and Chen (2005) and Wang and Liao (2006), who estimate cost structures and productivity growth in the Kaohsiung city bus system and in Taiwan Railway, respectively. Our main results are as follows. First, there exists both scale and scope economies in the Taiwanese international tourist hotels. Second, there is substitutability among the factor inputs of capital, labour and materials. Third, the output cost elasticity is lower for accommodation services compared to food and beverages and other services. Finally, there is evidence of technological progress in the industry over time. As the main new finding of the paper, this last result is quite important as productivity and technological improvements show that Taiwanese international tourist hotels are improving their competitiveness not only to compete with one another, but also against hotels in other tourist destinations. The rest of this paper is structured as follows. Section 2 develops the theoretical model, while Section 3 describes the data used and the estimation procedure. The empirical results are presented in Section 4. Section 5 provides the conclusions and some policy implications.

In this paper, we investigate the cost structure and productivity growth of the Taiwanese international tourist hotel industry. A translog cost function including three output variables (accommodation, food and beverages, and other services) and three input prices (labour, capital and materials) has been estimated using SURE and 3SLS using annual panel data for 47 international tourist hotels over the period 1997–2001. We improve on the estimation procedure adopted by previous hotel studies by controlling for heteroskedasticity and measurement error through the use of heteroskedastic-robust standard errors and 3SLS estimation. Our main results are as follows. First, the cost effect with respect to accommodation service is inelastic and the lowest among the three outputs. Second, output-specific scale economies exist for accommodation, food and beverage, and other services; this is consistent with the findings of Lin and Liu (2000) and Weng and Wang (2006). Third, applying Pulley and Braunstein's (1992) formulation of quasi-scope economies, we find that scope economies also exist across all three outputs. Fourth, technological change in the Taiwanese international tourist hotel industry is not neutral but depends on the combination of inputs and outputs. Pure productivity growth is positive between 1997 and 1999, and this may be attributed to either technological growth or improved efficiency in this period. Our results may offer guidance to hotel managers as to the management and expansion of existing facilities. Unlike food and beverage services, accommodation services have relatively high fixed costs. From the perspective of yield management, the issue of how to maximize revenues subject to the fixed capacity of guest rooms needs to be addressed. Since costs grow slowly with accommodation services, hotel managers should aim to attract more lodgers and increase room occupancy by means of effective marketing strategies. For example, a dynamic pricing mechanism through electronic marketing channels which has been successfully adopted by some low-cost airlines seems useful for hotel marketers. In addition, all cross-price elasticities are positive implying substitutability between factors. However, the degree of substitutability between labour and materials is the lowest. This provides hotel managers with information on the optimal expansion path of his/her hotel, given the hotel's existing resources in these areas. Labour cost always accounts for a considerable share of the total operating costs in the hotel industry. Given the seasonality of the hotel industry, hotel managers need to optimize their labour force to save avoidable labour costs in off-peak seasons. For example, the practice of on-the-job training to give full-time employees cross-functional skills would be helpful in lowering labour costs in off-peak seasons. In the peak seasons, successful use of part-time labour and outsourcing non-core services can improve operational efficiency without reducing service quality. Our results also have implications for policymakers. With rising income levels combined with the recent emergence of low-cost airlines and increasing trade relations in the East Asian region, the international hotel industry is likely to play an increasingly important role in the economies of these countries. Countries may face increasing competition from their neighbours for tourists and corporate travelers, so that the provision of better quality hotel services at affordable prices becomes a key part of the national tourism policy. Our results suggest that the Taiwanese government may want to implement policies that encourage the development of large international tourist hotels due to the scale and scope economies present in all three main outputs of these hotels. Policies to increase the degree of competition between hotels could also be implemented, if as suggested above productivity improvements coincided with periods of relatively low tourist arrivals. Support could also be given to increasing the ease of making hotel bookings through the development of online bookings and better links to online travel sites. More importantly, to significantly increase the demand for hotel accommodation, the government may wish to consider allowing the entry of tourists from mainland China to a greater extent. These would show up as improved productivity as it may increase occupancy for any given level of inputs. The approach we have used in this study, estimating a multi-product translog cost function, is well established in the literature. Nevertheless, the translog function does suffer from the fact that its flexibility means that it may violate the property of a cost function of concavity with respect to input prices. Since the Allen own-partial elasticities of substitution are negative, we can conclude that the estimated function is at least locally concave around the mean of the data. The lack of quality-related variables in the translog cost function specification is also a potential limitation in the study. In addition to the measured factor inputs, there are other factors affecting the outcome of a hotel's performance, such as management style, market orientation, hotel image, employee skills and other operating characteristics. Given the availability of data, future research can expand the existing specification to introduce qualitative variables into the cost function to better capture a hotel's productivity and managerial efficiency. Finally, given the dynamic and rapidly changing nature of the industry, examination of more-recent data would provide us with more up-to-date results on the elasticities and measures we seek to obtain from the research.