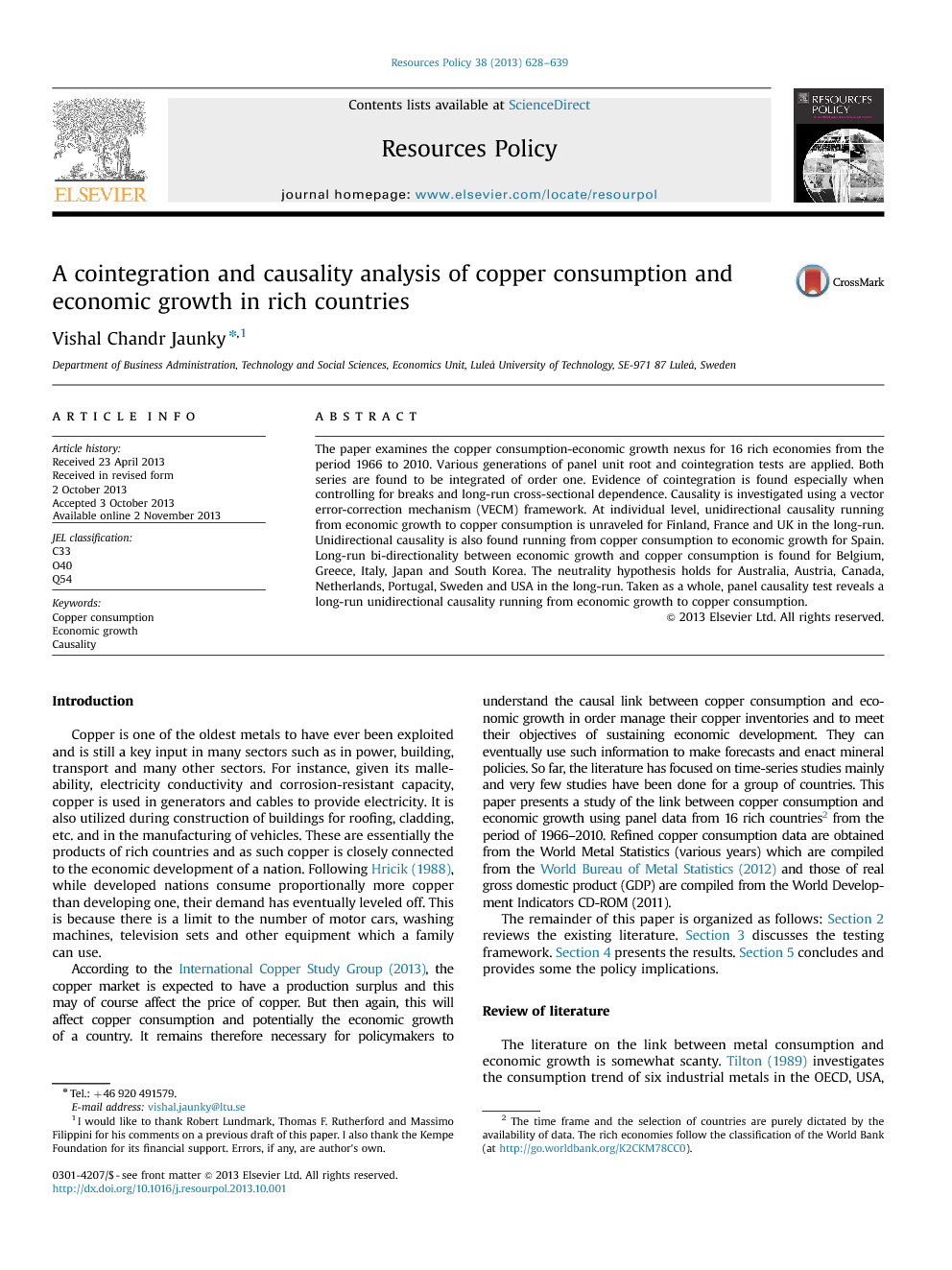 Copper is one of the oldest metals to have ever been exploited and is still a key input in many sectors such as in power, building, transport and many other sectors. For instance, given its malleability, electricity conductivity and corrosion-resistant capacity, copper is used in generators and cables to provide electricity. It is also utilized during construction of buildings for roofing, cladding, etc. and in the manufacturing of vehicles. These are essentially the products of rich countries and as such copper is closely connected to the economic development of a nation. Following Hricik (1988), while developed nations consume proportionally more copper than developing one, their demand has eventually leveled off. This is because there is a limit to the number of motor cars, washing machines, television sets and other equipment which a family can use. According to the International Copper Study Group (2013), the copper market is expected to have a production surplus and this may of course affect the price of copper. But then again, this will affect copper consumption and potentially the economic growth of a country. It remains therefore necessary for policymakers to understand the causal link between copper consumption and economic growth in order manage their copper inventories and to meet their objectives of sustaining economic development. They can eventually use such information to make forecasts and enact mineral policies. So far, the literature has focused on time-series studies mainly and very few studies have been done for a group of countries. This paper presents a study of the link between copper consumption and economic growth using panel data from 16 rich countries2 from the period of 1966–2010. Refined copper consumption data are obtained from the World Metal Statistics (various years) which are compiled from the World Bureau of Metal Statistics (2012) and those of real gross domestic product (GDP) are compiled from the World Development Indicators CD-ROM (2011). The remainder of this paper is organized as follows: Section 2 reviews the existing literature. Section 3 discusses the testing framework. Section 4 presents the results. Section 5 concludes and provides some the policy implications. Review of literature The literature on the link between metal consumption and economic growth is somewhat scanty. Tilton (1989) investigates the consumption trend of six industrial metals in the OECD, USA, Japan and the EEC over two periods, 1960–1973 and 1973–1985. Such trend is found to be stimulated by increased economic activities. Roberts (1990) forecasts US steel consumption up to 2010 using data over the period 1963–1983 and pinpoints to the importance of the gross national product (GNP) in determining metal use. Labson and Crompton (1993) analyze the link between five industrial metals and income for the USA, UK, Japan and OECD for the period of 1960–1987 and discover little evidence of a long-run relationship between the two variables. Ghosh (2006) studies the link between steel consumption and economic growth in India for the period beginning in 1951–1952 and ending in 2003–2004. He finds no evidence of cointegration but he finds existence of a unidirectional causal effect of economic growth on steel consumption. In similar fashion, Huh (2011) investigates the link between steel consumption and economic activity for Korea over the period of 1975–2008. He discovers evidence of a long-run relationship between total steel consumption and GDP, running from GDP to total steel consumption. Jaunky (2012) studies the link between aluminum consumption and economic growth for 20 rich countries. His study reveals a unidirectional causality running from aluminum consumption to economic growth in the short-run and vice-versa in the long-run.