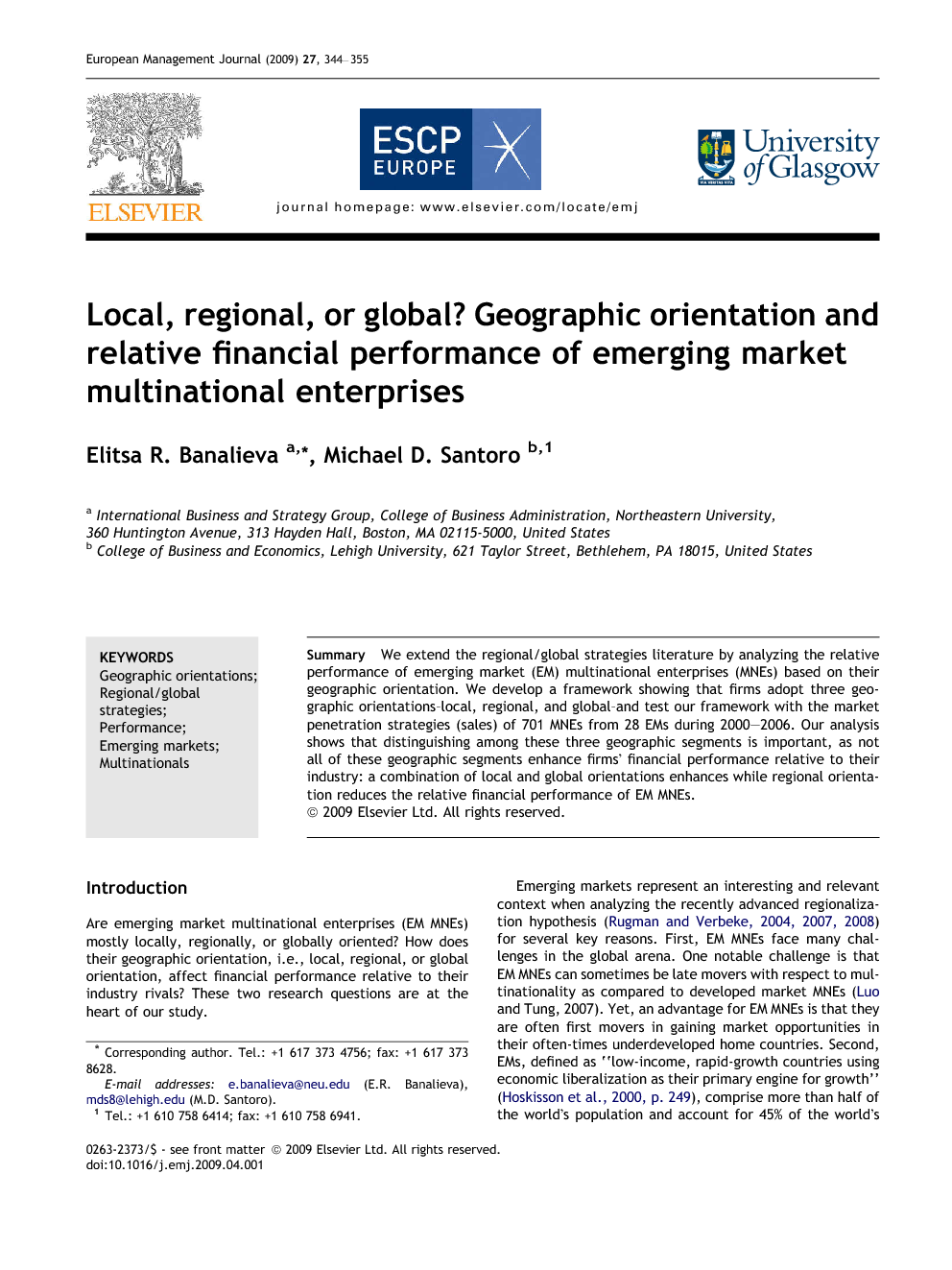 We extend the regional/global strategies literature by analyzing the relative performance of emerging market (EM) multinational enterprises (MNEs) based on their geographic orientation. We develop a framework showing that firms adopt three geographic orientations—local, regional, and global—and test our framework with the market penetration strategies (sales) of 701 MNEs from 28 EMs during 2000–2006. Our analysis shows that distinguishing among these three geographic segments is important, as not all of these geographic segments enhance firms’ financial performance relative to their industry: a combination of local and global orientations enhances while regional orientation reduces the relative financial performance of EM MNEs.

Are emerging market multinational enterprises (EM MNEs) mostly locally, regionally, or globally oriented? How does their geographic orientation, i.e., local, regional, or global orientation, affect financial performance relative to their industry rivals? These two research questions are at the heart of our study. Emerging markets represent an interesting and relevant context when analyzing the recently advanced regionalization hypothesis (Rugman and Verbeke, 2004, Rugman and Verbeke, 2007 and Rugman and Verbeke, 2008) for several key reasons. First, EM MNEs face many challenges in the global arena. One notable challenge is that EM MNEs can sometimes be late movers with respect to multinationality as compared to developed market MNEs (Luo and Tung, 2007). Yet, an advantage for EM MNEs is that they are often first movers in gaining market opportunities in their often-times underdeveloped home countries. Second, EMs, defined as “low-income, rapid-growth countries using economic liberalization as their primary engine for growth” (Hoskisson et al., 2000, p. 249), comprise more than half of the world’s population and account for 45% of the world’s exports (Economist, 2007). Third, despite the notable importance of EMs to the global economy and the challenges EM MNEs face in their internationalization, no study in the regional/global strategies literature to date has fully examined the link between regionalization and relative financial performance in the context of EM MNEs. So far, the literature’s focus has been largely on Triad MNEs (e.g., Delios and Beamish, 2005, Li, 2005, Rugman and Verbeke, 2004, Rugman and Verbeke, 2007 and Rugman and Verbeke, 2008). We aim to fill this gap with the present study. Specifically, we build upon previous literature (Delios and Beamish, 2005, Li, 2005 and Rugman and Verbeke, 2008) that suggests that an MNE’s home region includes two distinct geographic segments—local, i.e., activities within the home country; and regional, i.e., activities outside the home country but within the proximate home regional confines. We also expand on an even greater multinationality literature (e.g., Li, 2005, Hennart, 2007 and Wan and Hoskisson, 2003) by incorporating a third important component; i.e., the global segment, since some MNEs also operate globally (i.e., beyond their home country and home region). Since learning the competitive conditions of doing business and creating a competitive advantage in each of these three segments is costly for MNE managers, MNEs do not typically focus equally on the three geographic segments. Instead, firms, particularly EM MNEs, orient to various extents toward one of three main geographic segments: local, regional, or global. For instance, in 2006, Naspers, a South-African MNE focused on electronic and print media, extracted roughly 76% of its total sales from Africa and only 11.7% from the rest of the African continent; while Acer, a Taiwanese electronics MNE, extracted 63% of its total sales from the global segment outside of Asia, and 20% from Taiwan. A key question from these brief examples relates to how the differences in the firms’ geographic orientations affect their financial performance relative to their industry rivals. Focusing on the firms’ financial performance compared to that of their industry allows us to draw implications for the relative market position of the firm; i.e., whether the EM MNEs following each of these geographic orientations perform better or worse than their industry rivals. From a strategy perspective, performing better than the industry ensures the longer-term survival of the company, especially in an emerging market context where country-specific advantages such as lower labor costs enable firms to cut costs and compete more efficiently against each other, as it shows that the outperforming firm is capable of guarding its know-how and market share well against its industry rivals. Thus, analyzing how the geographic orientations of local, regional, and global relate to firms’ relative financial performance represents an important and interesting research question, which we address in this article. With this study, we address this issue and, in doing so, attempt to make both theoretical and empirical contributions to the growing regional/global strategies literature. First, we propose a finer-grained classification of firms’ geographic orientations that takes into account both firms’ intra regional (i.e., between home country and rest of home region) and global (i.e., outside the home region) expansions2 of EM MNEs. Second, by using a comprehensive dataset of 701 MNEs based in 28 EMs from Africa, the Americas, Asia, and Europe during 2000–2006, we analyze whether EM MNEs are mostly locally, regionally, or globally oriented and examine the relationships between these three geographic orientations and relative financial performance. Third, by investigating the geographic orientations of EM MNEs and relating them to the firms’ relative financial performance, we test our theory and add to previous research by examining this phenomenon with an understudied sample that is of growing importance in an increasingly interdependent global economy. In pursuing this line of inquiry we acknowledge that as Hennart (2007) notes, the internationalization-performance literature has produced inconclusive results, since in just the past decade alone, more than one hundred empirical articles have been written. However, they have failed to offer robust results regarding the relationship between multinationality and relative financial performance (Hennart, 2007). Our intent is to advance the theory through theoretical parsimony in the context of EM MNEs. To accomplish this, we follow Hennart’s (2007) call to examine the internationalization-performance relationship at lower levels of analysis, which allow the investigation and control for likely crucial variables at several levels of analysis. We, therefore, include firm-, industry-, country-, and region-level constructs in our analysis to address Hennart’s (2007) recommendations. This study is organized as follows. The next section proposes our conceptual framework of MNEs’ geographic orientations and their relationship to the firms’ relative financial performance. We then present our research design, followed by a discussion of our research results and our contributions to theory, future research, and management practice. We conclude by reviewing the caveats and main findings of this study.