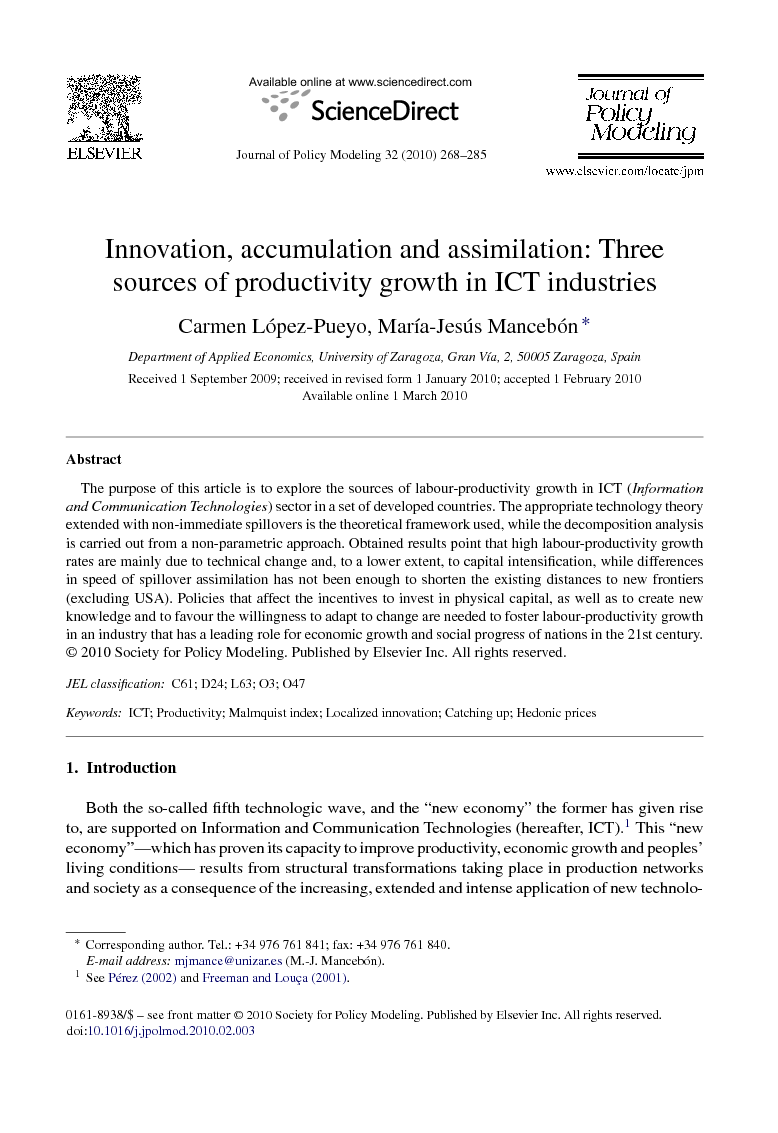 The purpose of this article is to explore the sources of labour-productivity growth in ICT (Information and Communication Technologies) sector in a set of developed countries. The appropriate technology theory extended with non-immediate spillovers is the theoretical framework used, while the decomposition analysis is carried out from a non-parametric approach. Obtained results point that high labour-productivity growth rates are mainly due to technical change and, to a lower extent, to capital intensification, while differences in speed of spillover assimilation has not been enough to shorten the existing distances to new frontiers (excluding USA). Policies that affect the incentives to invest in physical capital, as well as to create new knowledge and to favour the willingness to adapt to change are needed to foster labour-productivity growth in an industry that has a leading role for economic growth and social progress of nations in the 21st century.

Both the so-called fifth technologic wave, and the “new economy” the former has given rise to, are supported on Information and Communication Technologies (hereafter, ICT).1 This “new economy”—which has proven its capacity to improve productivity, economic growth and peoples’ living conditions— results from structural transformations taking place in production networks and society as a consequence of the increasing, extended and intense application of new technologies. This technology wave has a micro-electronic basis and can be exemplified mainly through the application of ICT to economic processes and social customs. According to the OECD (2003), these technologies influence growth through three main channels, namely: (1) rapid productivity growth in ICT manufacturing and the increasing size of these industries; (2) intensification of investment in equipment, incorporating information and communication technologies, and subsequent improvement in labour productivity; and (3) spillover effects on productivity generated by these technologies. In view of the relevance of ICTs and focusing on the first channel, the aim of this paper is analysing the effects of localized technological progress, appropriate technology conditions and differences in speed of spillover assimilation on labour-productivity growth in the ICT industry during the last two decades of the 20th century in a set of developed countries. The contribution of each of these effects to convergence/divergence patterns in labour productivity are analyzed within the theoretical context of the Basu and Weil (1998) model, extended with non-immediate spillovers (Los & Timmer, 2005). Thus, different national development paths shall arise, clarifying the roles of alternative policies in growth. Unlike other previous works (Färe et al., 2006, Kumar and Russell, 2002, Los and Timmer, 2005 and Timmer and Los, 2005), this paper follows a sectorial approach which allows a more accurate study of convergence/divergence patterns in OECD countries, as Bernard and Jones (1996) pointed out. This is due to the fact that convergence driven by technology diffusion occurs at level of industries (or products) rather than at aggregate level. For that reason, if countries experience different patterns of industrial specialization, convergence at industry level might not be reflected in aggregate studies. On the other hand, sector-specific analyses allow a better approach to the empirical approximation to of the appropriate technology concept. In this paper, the sector object of analysis is, as it has already been explained, ICT-producing manufacturing industries. Special attention is paid to the accurate measurement of the variables used in the article, due to the nature of the industry and the difficulties of international and intertemporal productivity analysis (OECD, 2001). By one hand, Inklaar, O’Mahony, and Timmer (2003) expose the rapid quality change that suffers the ICT industry and so, the need to properly deflated current values by hedonic prices. On the other hand, Inklaar and Timmer, 2007, Inklaar and Timmer, 2009a and Inklaar and Timmer, 2009b offer a systematic analysis about the consequences of measurement error in productivity comparisons. Empirical analysis shall be based on a frontier non-parametric intertemporal approach (Tulkens & Van den Eeckaut, 1995) which allows decomposing labour-productivity growth in three parts (Kumar & Russell, 2002): movement towards the frontier (gains of efficiency), movements along the frontier (capital accumulation) and movements of the frontier itself (technical change or innovation). This approach allows measuring the theoretical concepts proposed by Basu and Weil (1998) and Los and Timmer (2005). The paper is organized as follows. Section 2 presents the theoretical framework; Section 3 sets up the database used in the research and the methodological issues; the fourth section discusses the results about global frontiers and productivity growth paths. The paper finishes with a conclusions section.

Following the theoretical framework of Basu and Weil (1998) and Los and Timmer (2005) and applying the non-parametrical frontier methodology of Kumar and Russell (2002), sequential frontiers of production and decomposition of labour-productivity growth in the ICT-producing manufacturing industry have been estimated for six developed countries within the two last decades of the 20th century. Due to the nature of this industry, special attention was paid to variables measurement by using hedonic deflators and unit value ratios to reach accurate international comparison over time. Obtained results point that high labour-productivity growth rates in ITC industries are mainly due to localized innovation (shifts in high-end technology section of world frontier) and, to a lower extent, to capital intensification (accumulation), while differences in speed of technological catch-up (spillovers’ assimilation) has not been enough to shorten the existing distances to new frontiers (USA excluded). Successive estimated frontiers show that innovation has been more pronounced in the last decade and for higher capital intensities, as Basu and Weil (1998) theory proposes. Decomposition of labour-productivity growth shows that capital intensification (technological upgrading) is thus a prerequisite for being able to benefit from international technology spillovers. But spillover assimilation also needs time and the country's ability to catch-up improving its efficiency score (shortening the distance to the frontier). This gives support to Los and Timmer (2005) assumption of heterogeneous assimilation rates versus the immediate spillovers of appropriate technology proposed by Basu and Weil (1998). Analysis shows that developed countries in our sample have followed different paths. While France has maintained a forward position, the top has been reached by USA and Finland. Italy, Canada and Spain have not been able to benefit from spillovers’ assimilation. In spite of its great effort in capital intensification, Canada does not get to reach the appropriate technology, for which more innovation is achieved. Spain, after a capital intensification process and having apparently appropriate technology, has not been able to catch-up the global frontier as if some complementary capabilities were absent. Finally, Italy, which began with and currently sustains high capital/labour ratio (technology), has lost positions in relation to leaders. The results shows two clubs of countries at the beginning of the 21st century: the first group containing USA, France and Finland, with high productivity and efficiency levels; while the second group is formed by Canada, Italy and Spain, with low productivity and efficiency levels. In terms of technology (capital/labour ratio), Finland and Canada belong to the low capital-intensity club, while the high-medium capital-intensity club is formed by USA and France (with the highest levels), together with Italy and Spain. Policy mixes of innovation, accumulation in new ages of capital equipment, and development of complementary actives to take advantage of new technologies, can be managed by the countries to improve their relative positions. Innovation, that is particularly relevant in ICT-producing industries, creates some new technological knowledge that advances world global frontier, while rendering obsolete some of the technological knowledge that was create by previous innovations in a process of “creative destruction”. So, institutions, social arrangement and policies must be oriented to affect the incentive not only to save and the incentive to create new knowledge, but also the willingness and the ability to adapt to change. The compared experience of different countries that has been developed in this paper, can be a good benchmark to choose a sensible mix of those policies.