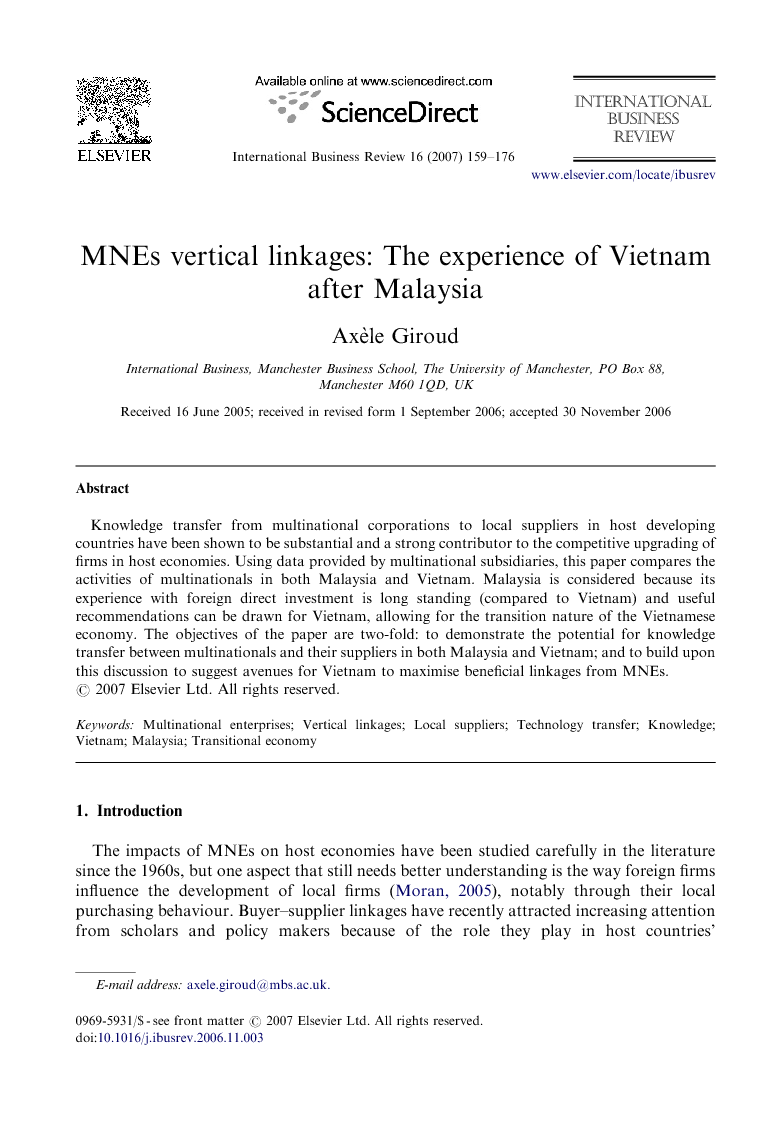 Knowledge transfer from multinational corporations to local suppliers in host developing countries have been shown to be substantial and a strong contributor to the competitive upgrading of firms in host economies. Using data provided by multinational subsidiaries, this paper compares the activities of multinationals in both Malaysia and Vietnam. Malaysia is considered because its experience with foreign direct investment is long standing (compared to Vietnam) and useful recommendations can be drawn for Vietnam, allowing for the transition nature of the Vietnamese economy. The objectives of the paper are two-fold: to demonstrate the potential for knowledge transfer between multinationals and their suppliers in both Malaysia and Vietnam; and to build upon this discussion to suggest avenues for Vietnam to maximise beneficial linkages from MNEs.

The impacts of MNEs on host economies have been studied carefully in the literature since the 1960s, but one aspect that still needs better understanding is the way foreign firms influence the development of local firms (Moran, 2005), notably through their local purchasing behaviour. Buyer–supplier linkages have recently attracted increasing attention from scholars and policy makers because of the role they play in host countries’ development, essentially by supporting the local supply industry and transferring knowledge to local suppliers. Porter (1990) emphasises the central place of supporting industries in generating competitive firms and countries. With this in mind, one of the key consequences of the presence of foreign firms in one sector in host countries is, therefore, the impact they potentially have on the supporting industry, and specifically the impact on the upgrading of suppliers through linkages and related technology transfer. Linkages by multinationals in host economies have received considerable attention in the literature (Blomström, Kokko, & Zejan, 2000; Giroud, 2003; Rodríguez-Clare, 1996; UNCTAD, 2001), yet, the mechanisms through which vertical linkages take place are still not well understood. While the study of linkages is well established in the economic development literature (Lin & Saggi, 2005; Markusen & Venables, 1999; Rodríguez-Clare, 1996), it has not been integrated fully within the theoretical strands of multinationals’ activities (Meyer, 2004). In common with existing theoretical models (e.g. the models developed by Markusen and Venables (1999) and Lin and Saggi (2005), incorporating technology transfer to a two-tier production structure), the paper makes the assumption that multinationals have positive effects on the development of indigenous firms through the creation of vertical linkages and sourcing of intermediate products locally (other effects notwithstanding), and also assumes that the multinational technology is superior to that of its competitors. Further, the paper draws from existing literature on vertical linkages and the literature on local technological capabilities (Lall (1996) and Lall (2002)). Numerous empirical studies have been conducted on these topics, with some authors examining the level of local purchase by MNEs in host economies (Belderbos, Capannelli, & Fukao, 2001; Driffield & Noor, 1999; Görg & Ruane, 2001; McAleese & McDonald, 1978; O’Farrell & O’Loughlin, 1981; Turok, 1993; UNCTAD, 2001) and how these vertical linkages impact on specific industries (Dries & Swinnen, 2004; Kelegama & Foley, 1999), while others focus on the issue of MNE-supplier technology and knowledge transfer (Blalock & Gertler, 2003; Crone & Roper, 2001; Giroud, 2003; Halbach, 1989; Ivarsson & Alvstam, 2005; Supapol, 1995; UNCTAD, 2001; Wong, 1991). Many studies also focus on the issue of wider technology spillovers by multinational firms in host economies (see for instance, Blomström & Kokko, 2001; Blomström et al., 2000; Görg & Strobl, 2001; Günther, 2005; Javorcik, 2004; Sjöholm, 1999, among others). To date, there has been no investigation of the potentially beneficial impact of MNEs on local suppliers through transfer of knowledge and technology in the specific case of Vietnam. In this respect, existing studies on transition economies focus on Eastern European countries (for instance, Javorcik (2004) analyses the spillovers from FDI through vertical linkages in Lithuania; Lorentzen, Møllgaard, and Rojec (2003) study technology transfer in the automotive industry in Poland, the Czech Republic, Hungary, Romania, Slovakia and Slovenia; Dries and Swinnen (2004) focus on the Polish dairy industry). Because they have only recently faced external competition, many firms in transition economies are in dire need of restructuring and upgrading of capital, technology and management (Dries & Swinnen, 2004). The study of the impact of FDI in a transition economy such as Vietnam, which has received substantial flows of foreign investment since the mid-1990s, provides useful insights into foreign firms’ relations with local suppliers. The paper analyses firm-level data collected in Malaysia and Vietnam to, first, assess the existence of technology and knowledge transfer from MNEs to local suppliers and, second, to compare the experience of the two countries. The comparison with Malaysia is particularly useful because it is a neighbouring country which is part of the same regional grouping (ASEAN) as Vietnam but having been host to FDI for far longer, MNEs have already developed substantial vertical linkages with its supplier industries (Cantwell & Iguchi, 2005; Driffield & Noor, 1999; Giroud, 2003; Rasiah, 1995). Other studies have drawn upon the lessons that can be learnt by Vietnam from Malaysia in terms of economic development (Mirza and Giroud, 2004).

The analysis of the data shows that locally-owned suppliers in Vietnam do not yet benefit from foreign firm's superior technology and managerial expertise to the same extent as those in Malaysia. Levels of backward linkages remain small, and little knowledge is being shared by foreign firms with local suppliers. The discussion highlighted some issues related to the transition nature of Vietnam that might explain these limited linkages. Although some of the issues discussed are common to other developing economies, the need to develop further the local supply industry and specifically the private sector is more acute in transition economies such as Vietnam. The specificities of the Vietnamese economic and political systems need to be considered to design an effective promotion programme of vertical linkages. Policies such as local content requirements, rules-of-origin regulations, and other trade-related investment measures have often proved insufficient instruments7 (Hackett & Srinivasan, 1998; UNCTAD, 2003). Soft policy provisions, whereby MNEs are not operating under mandatory rules, but rather are encouraged to conduct business in a particular way, such as those adopted in Malaysia might be more effective. Of course, the inward FDI policies and trade policies encourage foreign firms’ activities in the country, but most urgently, Vietnam must promote its competitive environment and focus on the enhancement of domestic firms’ capabilities, for both SOEs and non-SOEs. This will strengthen the potential for linkages and spillovers by MNEs. Vietnam must first support entrepreneurship and foster the creation of new industries, and new companies, promote private investment (in fixed assets, R&D and training) so as to consolidate the foundation of the competitiveness of domestic firms. Many local suppliers to MNEs are small-scale, and need to improve upon their production, marketing and distribution systems. In the longer term, some of these weaknesses can be remedied, as was achieved in Malaysia, through partnerships between foreign firms and local suppliers. This will be feasible once the preconditions for linkages creation and knowledge sharing are in place. Only then will foreign affiliates feel the benefits of initiating supplier development programmes, some of these linked to government incentives. Indeed, with the competitive foundations in place, further policies targeting partnerships and knowledge sharing between foreign firms and local firms can be implemented. In Malaysia, for instance, the government has adopted a cluster-based approach with strong concern for local linkage creation, thereby supporting existing incentives to attract foreign firms. Similar schemes will be useful in Vietnam too, but only once the local supply base has been sufficiently developed. Finally, the suggestions given above apply to other transition economies, but individual environments differ significantly and the success of linkage promotion measures can only be achieved when contextually specific conditions and policies are in place.