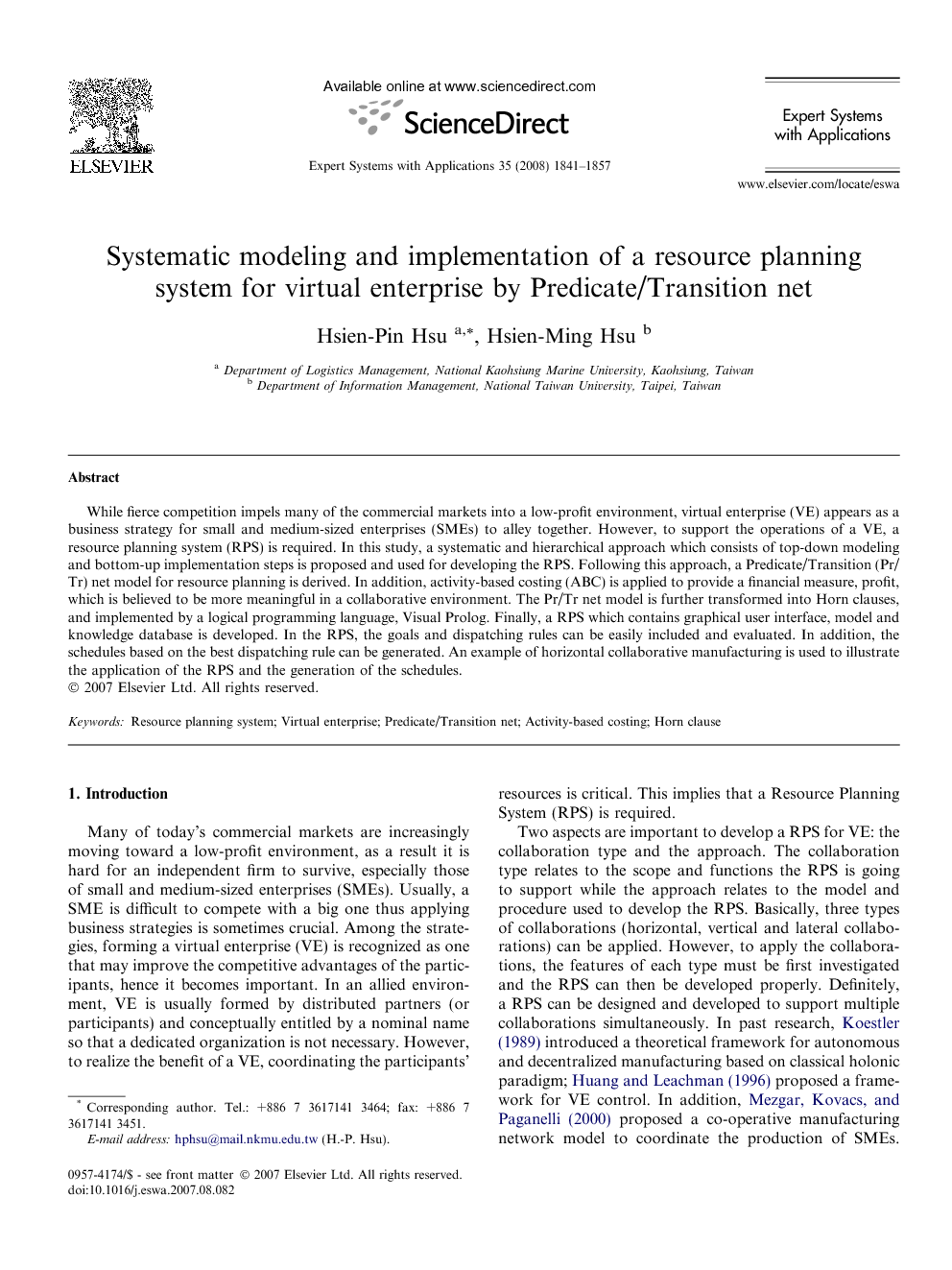 While fierce competition impels many of the commercial markets into a low-profit environment, virtual enterprise (VE) appears as a business strategy for small and medium-sized enterprises (SMEs) to alley together. However, to support the operations of a VE, a resource planning system (RPS) is required. In this study, a systematic and hierarchical approach which consists of top-down modeling and bottom-up implementation steps is proposed and used for developing the RPS. Following this approach, a Predicate/Transition (Pr/Tr) net model for resource planning is derived. In addition, activity-based costing (ABC) is applied to provide a financial measure, profit, which is believed to be more meaningful in a collaborative environment. The Pr/Tr net model is further transformed into Horn clauses, and implemented by a logical programming language, Visual Prolog. Finally, a RPS which contains graphical user interface, model and knowledge database is developed. In the RPS, the goals and dispatching rules can be easily included and evaluated. In addition, the schedules based on the best dispatching rule can be generated. An example of horizontal collaborative manufacturing is used to illustrate the application of the RPS and the generation of the schedules.

Many of today’s commercial markets are increasingly moving toward a low-profit environment, as a result it is hard for an independent firm to survive, especially those of small and medium-sized enterprises (SMEs). Usually, a SME is difficult to compete with a big one thus applying business strategies is sometimes crucial. Among the strategies, forming a virtual enterprise (VE) is recognized as one that may improve the competitive advantages of the participants, hence it becomes important. In an allied environment, VE is usually formed by distributed partners (or participants) and conceptually entitled by a nominal name so that a dedicated organization is not necessary. However, to realize the benefit of a VE, coordinating the participants’ resources is critical. This implies that a Resource Planning System (RPS) is required. Two aspects are important to develop a RPS for VE: the collaboration type and the approach. The collaboration type relates to the scope and functions the RPS is going to support while the approach relates to the model and procedure used to develop the RPS. Basically, three types of collaborations (horizontal, vertical and lateral collaborations) can be applied. However, to apply the collaborations, the features of each type must be first investigated and the RPS can then be developed properly. Definitely, a RPS can be designed and developed to support multiple collaborations simultaneously. In past research, Koestler (1989) introduced a theoretical framework for autonomous and decentralized manufacturing based on classical holonic paradigm; Huang and Leachman (1996) proposed a framework for VE control. In addition, Mezgar, Kovacs, and Paganelli (2000) proposed a co-operative manufacturing network model to coordinate the production of SMEs. Moreover, Huang, Hu, and Li (2004) applied timed colored Petri Net (TCPN) to model distributed manufacturing processes of member enterprise of a virtual manufacturing organization (VMO). However, these researches mainly focused on the modeling phase thus the implementation phase was not detailed; still there is a gap between the modeling and implementation phases. Thus, a procedure which can systematically support and closely link both of the modeling and implementation phases is required. In addition to the procedure, modeling tool is another critical factor impacting the development of a RPS. In this study, Predicate/Transition (Pr/Tr) net is selected as the modeling tool due to its powerful modeling capability supported by two important features emphasized by Janneck and Naedele (1998): the ability of abstraction and refinement as well as the ability of configuration support. The former provides basic functions for modeling a system while the later enables system variants to be included flexibly. Moreover, Pr/Tr nets represent knowledge and reasoning rules (by predicates and transitions) graphically, thus they can be easily transformed into Horn clauses. Additionally, along with some other (expert) knowledge, a (expert) knowledge-based planning engine of the RPS can be established. In the past, it is found that dispatching rules have been widely used for planning, and non-financial measures (such as maximum throughput, maximum utilization of workstations, minimum production cycle time, least tardiness or maximum wafer movements) have been used to evaluate the planning results (Glassey and Resende, 1988, Johri, 1993, Spearman et al., 1990, Uzsoy and Lee, 1992 and Wein, 1988). Non-financial measures, however, cannot dollarize the amount of improvement (Fisher, 1992), nor can they directly link to an enterprise’s financial vision, such as a company-level profitability, which is much emphasized by small firms (Laitinen, 2002). Fortunately, activity-based costing (ABC) was found can cover the shortages. ABC was firstly introduced by George and Stabus in 1977 and was believed can provide visibility to cost behavior (Ong, 1995 and Pirttila and Hautaniemi, 1995). Moreover, ABC was further suggested could be adapted to provide profit information (Salafatinos, 1996), a financial measure, which is believed to be more meaningful in a collaborative environment because it seems hard to sustain a partnership without a profitable foundation. Thus, this study includes cost/profit concept into the RPS, differing to most of the past research.

VE has been regarded as a strategy enabling SMEs to alley and survive in a competitive environment and some of the past research had paid attention to this. However, relatively little research attention so far seems to have been devoted to propose a systematic approach for developing a RPS in supporting the operations of a VE. Thus, a systematic approach which includes steps of top-down analysis and bottom-up implementation is proposed in this study. Following the approach, a Pr/Tr net model for resource planning is derived and it can be easily and directly transformed into Horn clauses and implemented by Visual Prolog, and a RPS is finally developed. The RPS has the following advantages: (1) It is a rule-based system thus goals, dispatching rules and expert knowledge are easily to be included, (2) The system can automatically evaluate alternative dispatching rules and suggest the best one, meanwhile, create the schedules. Thus, it seems that less human intervention is required. (3) ABC concept is included so that cost/profit information, a financial measure, can be provided. A financial measure is thought to be more meaningful in a collaborative environment and useful for supply chain management (SCM). This study puts much effort on the implementation phase, because it is believed to be important in practical application but was seldom elaborated in past studies. In addition, the development of the Pr/Tr net model and the transformation of it into Horn clause are detailed in a systematic approach. The can shorten the gap between the modeling and implementation phases. Moreover, the Pr/Tr net model derived in this study is quite general thus it can be quickly applied to other similar application areas, if the activities of the application areas can be defined and the resource(s) of activities can be analyzed within a short time. An example in this study has demonstrated the application capability of the RPS. Although the example is focused on horizontal collaboration, the vertical and lateral collaborations seemed are applicable. Thus, future research direction is implied.