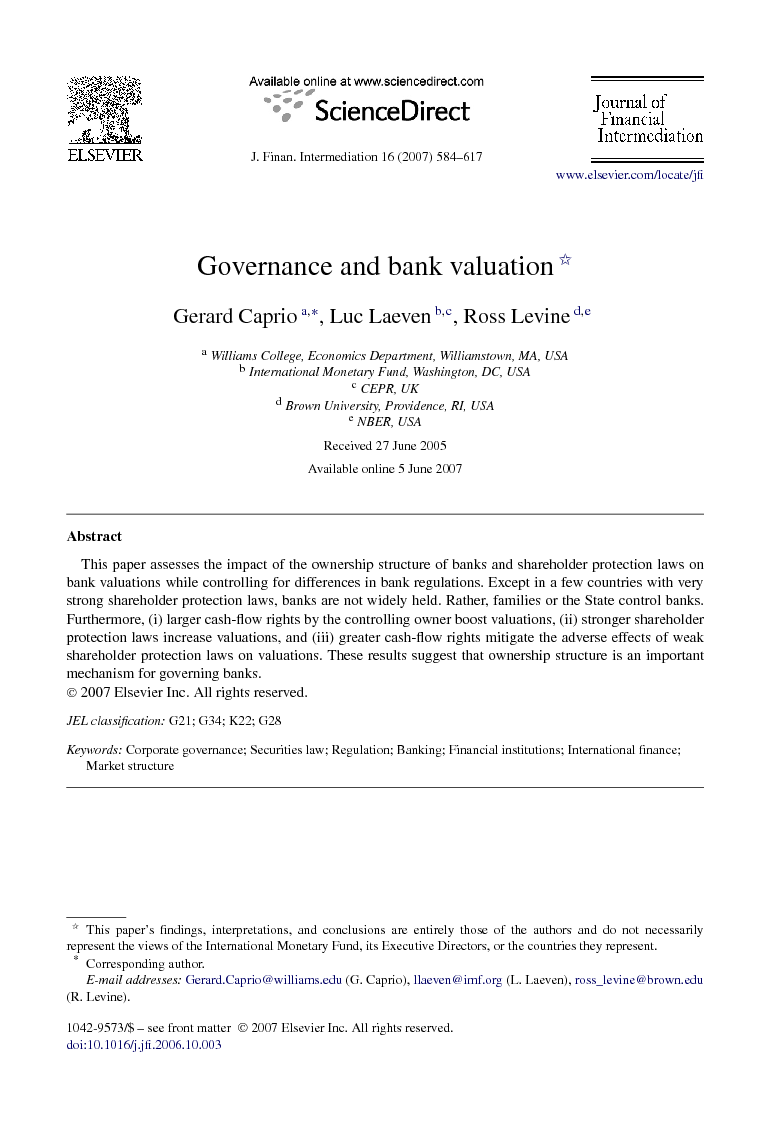 This paper first constructed new data on the ownership of 244 banks in 44 countries and then (1) documented the ownership structure of banks around the world and (2) assessed different theories about the relationships among ownership structure, shareholder protection laws, and bank valuations. On ownership, we find that except in a few countries with very strong shareholder protection laws, banks are not widely held. Indeed, 21 out of the 44 countries in our sample do not have a widely held bank among the ten largest banks. Rather, banks tend to be controlled by a family or the State. On valuations, we find that (i) larger cash-flow rights by the controlling owner boosts valu- ations, (ii) weak shareholder protection laws lower bank valuations, and (iii) greater cash-flow rights mitigate the adverse effects of weak shareholder protection laws on bank valuations. These results are consistent with the views that expropriation of minority shareholders in banks is important internationally, that laws can play a role in restraining this expropriation, and that con- centrated cash-flow rights also represents an important mechanism for governing banks. These results are robust to an array of robustness checks, including controls for numerous country- specific and bank-specific characteristics, the use of different definitions for ownership control and bank valuations, and re-estimation using different samples of countries and banks. Fur- thermore, we do not find robust evidence that the stringency of capital requirements or official supervisory power influences bank valuations, nor do we find that regulatory restrictions on bank activities affect the market’s valuation of banks. Finally, when we scrutinize the different chan- nels through which regulation may affect the governance of banks, we find no evidence that regulation has an impact on bank valuations—neither a positive effect by reducing expropriation nor a negative effect by reducing bank risk below the level desired by shareholders. Thus, the results indicate that the same core corporate control mechanisms that influence the governance of non-financial firms also influence bank operations