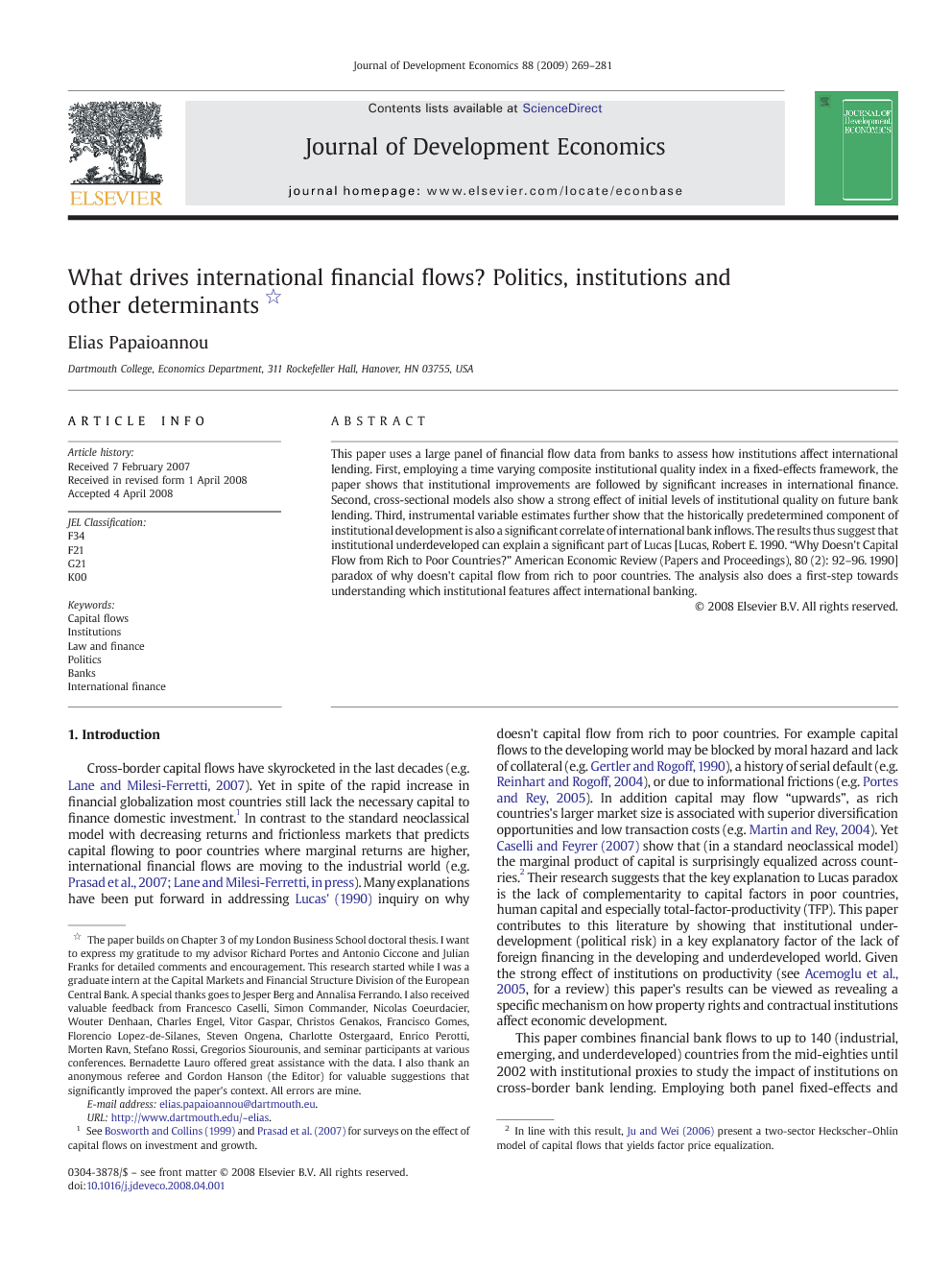 Cross-border capital flows have skyrocketed in the last decades (e.g. Lane and Milesi-Ferretti, 2007). Yet in spite of the rapid increase in financial globalization most countries still lack the necessary capital to finance domestic investment.1 In contrast to the standard neoclassical model with decreasing returns and frictionless markets that predicts capital flowing to poor countries where marginal returns are higher, international financial flows are moving to the industrial world (e.g. Prasad et al., 2007 and Lane and Milesi-Ferretti, in press). Many explanations have been put forward in addressing Lucas' (1990) inquiry on why doesn't capital flow from rich to poor countries. For example capital flows to the developing world may be blocked by moral hazard and lack of collateral (e.g. Gertler and Rogoff, 1990), a history of serial default (e.g. Reinhart and Rogoff, 2004), or due to informational frictions (e.g. Portes and Rey, 2005). In addition capital may flow “upwards”, as rich countries's larger market size is associated with superior diversification opportunities and low transaction costs (e.g. Martin and Rey, 2004). Yet Caselli and Feyrer (2007) show that (in a standard neoclassical model) the marginal product of capital is surprisingly equalized across countries.2 Their research suggests that the key explanation to Lucas paradox is the lack of complementarity to capital factors in poor countries, human capital and especially total-factor-productivity (TFP). This paper contributes to this literature by showing that institutional underdevelopment (political risk) in a key explanatory factor of the lack of foreign financing in the developing and underdeveloped world. Given the strong effect of institutions on productivity (see Acemoglu et al., 2005, for a review) this paper's results can be viewed as revealing a specific mechanism on how property rights and contractual institutions affect economic development. This paper combines financial bank flows to up to 140 (industrial, emerging, and underdeveloped) countries from the mid-eighties until 2002 with institutional proxies to study the impact of institutions on cross-border bank lending. Employing both panel fixed-effects and cross-sectional models the empirical analysis reveals a robust relationship between well-functioning institutions and foreign bank flows. The effect of institutional quality does not seem to be driven by income, human capital, or financial-economic risk. The strong institutions bank flows nexus is also present when we use instrumental variable techniques to account for endogeneity and measurement error. This paper is closely related to empirical work that examines the effect of institutional and informational frictions on various types of foreign investment (e.g. Wei, 2000a, Wei, 2000b, Portes et al., 2001 and Wei and Wu, 2002Portes and Rey, 2005, Buch, 2003, Gelos and Wei, 2005 and Alfaro et al., 2008). Using mainly cross-sectional approaches this literature has revealed a significant correlation between various types of institutional quality, such as low corruption and well-functioning bureaucracy, and international capital flows and holdings. Yet this correlation does not necessarily imply a causal relationship. First, both well-functioning institutions and foreign investment may be driven by a third, hard-to-account-for factor, such as trust or social capital (e.g. Guiso et al., 2004 and Guiso et al., 2006). Second, there is the issue of reverse causation. Since foreign investors ask pressure to governments to enhance investor's protection, remove bureaucratic barriers, and tackle corruption, the correlation may (partly at least) capture this effect. This paper aims to advance this literature, employing two different methodologies that account for these drawbacks. First, I utilize the time-series dimension employing panel techniques that account for country unobserved characteristics. Controlling for fixed-effects accounts for (to a first-approximation time-invariant) social norms, culture, geography, and trust, that affect both finance and institutional quality. This method also addresses directly whether institutional reforms are rewarded by foreign investors in terms of increased lending. The panel estimates are based on two datasets of bank lending from the Bank of International Settlements (BIS). The first covers at a quarterly frequency bank flows from 19 “source” to 50 “recipient–host” countries, while the second dataset reports annual aggregate flows to 140 recipient countries, both over the 1984–2002 period. The first dataset allows controlling for both “push” and “pull” factors. The second enables me to examine the effect of institutions on bank flows in a much wider sample than the previous work. Controlling for standard gravity factors (such as distance, size, etc.), time trends, and source country characteristics the fixed-effect estimates show that institutional improvements are followed by increased bank lending. Second, to account for reverse causality, I build on the institutions and development literature (La Porta et al., 1998, Hall and Jones, 1999, Acemoglu et al., 2001 and Acemoglu et al., 2002) and estimate cross-sectional models using instrumental variable techniques.3 Besides endogeneity the IV estimates also account for measurement error in the institutional quality proxies. The IV estimates show that the historically predetermined component of institutional performance from colonial history is a significant correlate of foreign bank lending. The results are similar when I estimate cross-sectional models with initial values.

This paper studies the determinants of international fi nancial fl ows frombanks in a large panel of countries and years, trying to shed light to the Lucas (1990) paradox on “ why doesn't (bank) capital fl owfrom rich to poor countries ” . The results suggest that poorly per- forming institutions, such as weak protection of property rights, legal inef fi ciency, anda high riskofexpropriationaremajor impediments to foreign bank capital. The analysis is carried with panel and cross-sectional methods. First, I utilize the time-variation in bank lending and institutional quality estimating fi xed-effect models that account for (to a fi rst approximation) time-invariant country unobservable characteristics, such as trust, social capital, and geography, that may affect both foreign lending and institutions. The “ within ” estimates suggest that political liberalizations, privatization and other structural policies enable the economy to attract substantially more foreign bank capital. Second, I estimate cross-sectional models using predetermined values of institutional quality to account for reverse feedback of international lending on institutional quality. The results suggest that institutional quality rather than income or human capital is the key correlate of bank lending. Third, to tackle endogeneity and account for measure- ment error in the institutional proxies, I estimate instrumental variable models using legal origin (following La Porta et al., 1998 ) and population density before colonization(following Acemoglu et al., 2002 ) to extract the historically predetermined component of institutions on foreign bank fl ows. The IV estimates imply a highly signi fi cant and economically sizable effect of institutional perfor- mance on foreign bank lending. Fourth, I use the components of the aggregate institutional index in an effort to identify which exactly institutional features correlate with foreign bank lending. The models suggest that property rights and legal institutions that protect foreign investors against expropriation and contract repudiation are the most signi fi cant correlates of future bank lending. The results call for additional research. Theory on international capital movements needs tomodel explicitly the mechanisms through which institutions in fl uence investors' decisions. Although it is unlikely that institutions alone can explain the large equity home- bias and the low levels of international diversi fi cation, institutional performance and politics should be an ingredient of new theoretical effort to analyze cross-border capital movements.