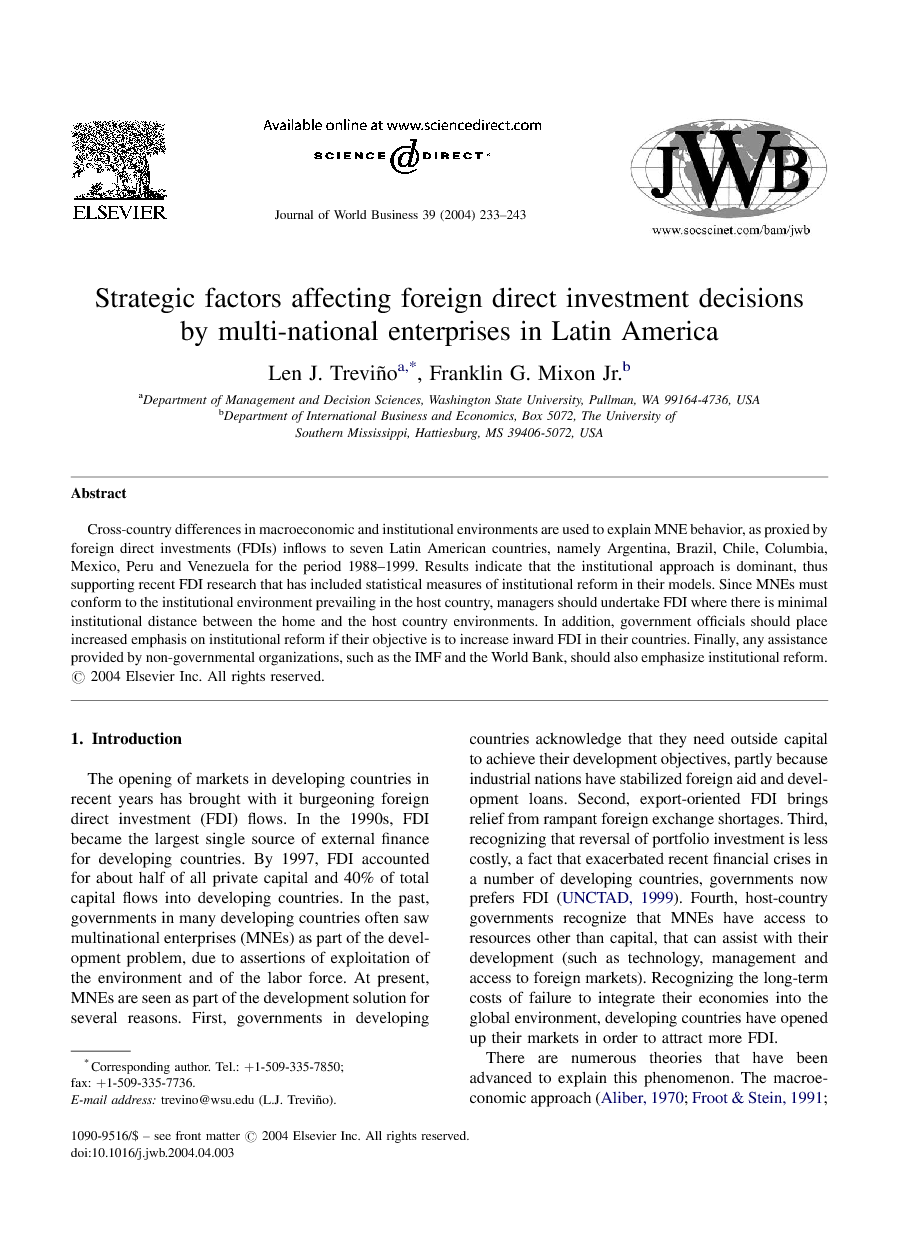 The opening of markets in developing countries in recent years has brought with it burgeoning foreign direct investment (FDI) flows. In the 1990s, FDI became the largest single source of external finance for developing countries. By 1997, FDI accounted for about half of all private capital and 40% of total capital flows into developing countries. In the past, governments in many developing countries often saw multinational enterprises (MNEs) as part of the development problem, due to assertions of exploitation of the environment and of the labor force. At present, MNEs are seen as part of the development solution for several reasons. First, governments in developing countries acknowledge that they need outside capital to achieve their development objectives, partly because industrial nations have stabilized foreign aid and development loans. Second, export-oriented FDI brings relief from rampant foreign exchange shortages. Third, recognizing that reversal of portfolio investment is less costly, a fact that exacerbated recent financial crises in a number of developing countries, governments now prefers FDI (UNCTAD, 1999). Fourth, host-country governments recognize that MNEs have access to resources other than capital, that can assist with their development (such as technology, management and access to foreign markets). Recognizing the long-term costs of failure to integrate their economies into the global environment, developing countries have opened up their markets in order to attract more FDI. There are numerous theories that have been advanced to explain this phenomenon. The macroeconomic approach (Aliber, 1970; Froot & Stein, 1991; Grosse & Trevino, 1996) emphasizes why net investment among pairs or groups of nations tends to flow in certain patterns. This theory attempts to explain FDI behavior with macroeconomic variables, such as inflation, national income and exchange rate behavior. With developing countries undertaking market reforms and becoming more receptive to FDI, researchers have begun to apply institutional theory from the strategic management literature (Kennedy & Sandler, 1997; Trevino, 1999; Trevino, Daniels, & Arbelaez, 2002) to understand this phenomenon. Institutional theory emphasizes the influences of systems surrounding organizations that shape organizational behavior and decision making (Scott, 1995). As such, it attempts to explain the organization–environment interface. According to Hoskisson, Eden, Lau, and Wright (2000), the role of institutions in an economy is to reduce transaction and information costs by reducing uncertainty and by establishing a stable structure that facilitates interactions. Empirical research using an institutional theoretical approach has emphasized the study of political risk, bilateral investment treaties, foreign investment and trade regulations, and capital markets liberalization in an attempt to explain FDI. Although both of these approaches have been employed separately (Grosse & Trevino, 1996; Meyer, 2001) and together (Trevino et al., 2002), no effort has been made to determine the individual importance relative to each. This paper fills that void by presenting hypotheses concerning these two approaches. The empirical results support the superiority of the institutional construct, thus lending credence to recent studies that have employed institutional theory to explain FDI into developing and transitional economies (Trevino et al., 2002). Latin America is a useful region for our study because Latin American and Caribbean countries receive a significant portion of FDI inflows going to developing countries (UNCTAD, 1999). In addition, debt crises in this region resulted in reduced FDI inflows during the first half of the 1980s, after which they began a steady increase, partially resulting from macroeconomic and institutional liberalization policies. Although institutional reform has taken place in almost all countries of the region, Latin American countries’ liberalization policies, market reforms and inflows of FDI have varied cross-sectionally and over time. The seven countries examined in the current study were Argentina, Brazil, Chile, Colombia, Mexico, Peru, and Venezuela. Combined, they account for over 85% of FDI in Latin America.